This week: ROAD TRIP! We’re takin’ our Holler Smarts all the way from Appalachia to Norman, Oklahoma for a Big 12 shootout between the Mountaineers and the Sooners. Afterwards, we’re gonna weave our way through some golf courses to Athens, GA for a beautiful afternoon Between the Hedges where you’ll hear the delightful, shared song of the Alabama and Georgia fan bases, “Run the Dang Ball.” Then, we’ll turn the car around and head back towards Waco, Texas in order to watch a masked man attempt to escape from ravenous bears that have been fed nothing but Clive Owen’s liquid cocaine. We will then storm back towards South Carolina for Notre Dame-Clemson where Irish fans attempt to explain sacrilege to a dude wearing orange and purple candy striped overalls.

GAME 1: WILL FLORIDA STATE FANS PAY FOR AN AL GOLDEN BANNER IN CINCY

Al Golden’s 2015 Miami team is uncomfortably 3-0; the undefeated ranking has been clouded by airplane banners and intense, negative feedback. It didn’t help that one of the wins was almost a loss due to a complete collapse against Nebraska. Yet, the Huskers’ Tommy Armstrong threw an interception into the Miami defense and Golden has got to enjoy two weeks of relative safety. Miami’s trip to Cincinnati may change that, however. The Bearcats put up an absurd amount of points against Memphis despite losing QB Gunner Kiel to a nasty head injury. The Hurricane defense, once the pride and joy of Coral Gables, looks like they have come across one of their toughest opponents thus far. If the ‘Canes walk out of Cincinnati with an L, the wheels towards Golden’s tenure are very likely set in motion. A win here would quiet the talks to Internet murmurs and more Florida State funded banners a little while longer.

ESPN kicks off from Nippert Stadium starts at 7:30 PM on Thursday.

GAME 2: IOWA IS 4-0 SINCE OBAMA’S FIRST YEAR IN THE WHITE HOUSE

Where were you in 2009? I can tell you that I was in college and I was reeling from another season where Urban Meyer’s Florida Gators won the BCS Championship. It was Obama’s first year in the White House and America was in the midst of a recession. It was before Nick Saban and Crimson Tide washed themselves all over college football. Flash forward six years and it is now Obama’s last year in the Executive Branch and we are far removed from a systemic housing crisis that crippled the economy. Yet, one thing has tethered itself to 2009 and it is Kirk Ferentz’s Iowa Hawkeyes at 4-0. Ring the bells, children of the corn! Raise a barn, you Black Hearts with Gold Pants! There is music in the farms again!

Iowa starts their march towards 6-6 in Madison, Wisconsin’s Camp Randall at 12:00 PM on ESPN.

One of the biggest surprises of the early season is the statistical dominance of West Virginia’s defense. That’s right, the defense. Dana Holgorsen’s air raid offense has usually been the main attraction around Morgantown but there seems to be some strides made with the return of Tony Gibson at defensive coordinator. In the Mountaineers’ first three games, they have held their opponents to a total of 23 points. The most impressive of which is their opening shut out of Georgia Southern, a team that has gone on to average 45 points through three games. The numbers love 2015 West Virginia as evidenced by the S&P+ rankings which place them as the third best team in the country behind Alabama and Florida State. A road trip to Oklahoma on Saturday offers a steep challenge to the rigidity of those statistics but if they ring true this weekend, forget about Baylor, TCU, and Oklahoma. The Mountaineers might be your One True Champion.

GAME 4: BAYLOR’S FIRST GAME AGAINST SOMEONE OTHER THAN LAMAR

Baylor has not stopped scoring points since the season started. They have won by margins of 35 and 53 thus far. However, they have been putting up these points against SMU, Lamar and Rice. The Bears are just now dipping their toes into conference play this week against the Texas Tech Red Raiders. Last week, Tech scared the ranking out of TCU before a divine tipped pass helped them escape Lubbock. Now, Baylor gets its first conference game from a decent Tech team and the game may prove about as nail biting as the tortilla tossing ceremony from last week. The unit tipping the scales in the Bears’ favor is their defense which is healthier than the Horned Frogs’ unit. This game is a harder to hill to climb for Kliff Kingsbury and could be outrageously lopsided. The entertainment might be in finding out how good Baylor’s defense is this year.

Game starts at 3:30 PM from AT&T Stadium in Arlington on ABC.

GAME 5: RUN THE DANG BALL IS A RAP DUO FRONTED BY BUBBA SPARXXX AND RICH BOY

Alabama opened up as the underdog for the first time in 72 games. It’s a nice, little fun fact to consider when you remember that QB Greyson Lambert used to hit ‘PANIC’ in high pressure situations before his transfer to Georgia. The Bulldogs don’t necessarily need Lambert to be the point guy on offense; they just need someone who can get off short passes (which he might be more comfortable with at UGA). Other than that, the Bulldog offense will be run mostly through RB Nick Chubb, a player who is quietly having a nice year in the shadow of LSU’s Leonard Fournette. Alabama has a similar strategy and its effectiveness depends on the Georgia defense, a unit whose credentials include rolling over Louisiana-Monroe, Vanderbilt, South Carolina and Southern. This game serves more as a litmus test for Georgia than Alabama. We all know how Alabama responds after losing a game; Georgia has been spotty at handling confidence bolstering expectations. If they beat an angry Tide team, I’d say the world of the SEC is their oyster.

GAME 6:  OLE MISS VISITS THE SWAMP FOR THE FIRST TIME IN THE HUGH FREEZE ERA

It’s kind of an odd thing to see the Rebels ranked as the third best team in the country and visiting Florida. The Swamp used to be the kind of place the Rebels used to fear due to tenures from Steve Spurrier and Urban Meyer. Now, after winning in Tuscaloosa, the task kinda seems like a cake walk even if Florida is 4-0. The Gators might have enough to win the wild, wacky race of the East division but Ole Miss is of a different caliber. Despite a hangover from the Alabama game against Vanderbilt, Ole Miss likely romps their way to another W with some more Robert Nkemdiche offensive plays.

Watch Nkemdiche do things against Florida at 7:00 PM on ESPN.

Two of the most disappointing teams in college football meet in Knoxville on Saturday: Arkansas and Tennessee. Both were riding high into the season on lofty preseason expectations. The Razorbacks were supposed to flatten any opponent on their way to the end zone. Instead, they are one of the worst teams in the nation with regards to red zone efficiency. Tennessee, meanwhile, was supposed to be a significantly improved team due to outstanding recruitment from head coach Butch Jones. Their Saturday performances, however, have reflected a hatred for basic level probability and a reliance on faulty charts. A loss for either one of these teams will likely be heard traveling down wind from the Ozarks or the Smokies.

Kids with failing progress reports will be forced to watch this game by their parents at 7:00 PM on ESPN2.

For the past two years, the Aggies have looked titanic in their first few weeks. Yet, Kevin Sumlin’s 2014 unraveled before national audiences all throughout October. Another year, another great first week win and another overtime win over Arkansas – the song remains the same. Texas A&M faces their toughest competition yet when Mississippi State comes to Kyle Field. QB Dak Prescott is still the dangerous threat he was last year and A&M’s defense had trouble against anything that ran out of Arkansas’ back field last week. As someone who cares about your investments, I’d probably dump my Texas A&M stock before the start of this game. October has not been kind to the Aggies without Johnny Manziel.

Kickoff begins at 7:30 PM from College Station on the SEC Network. 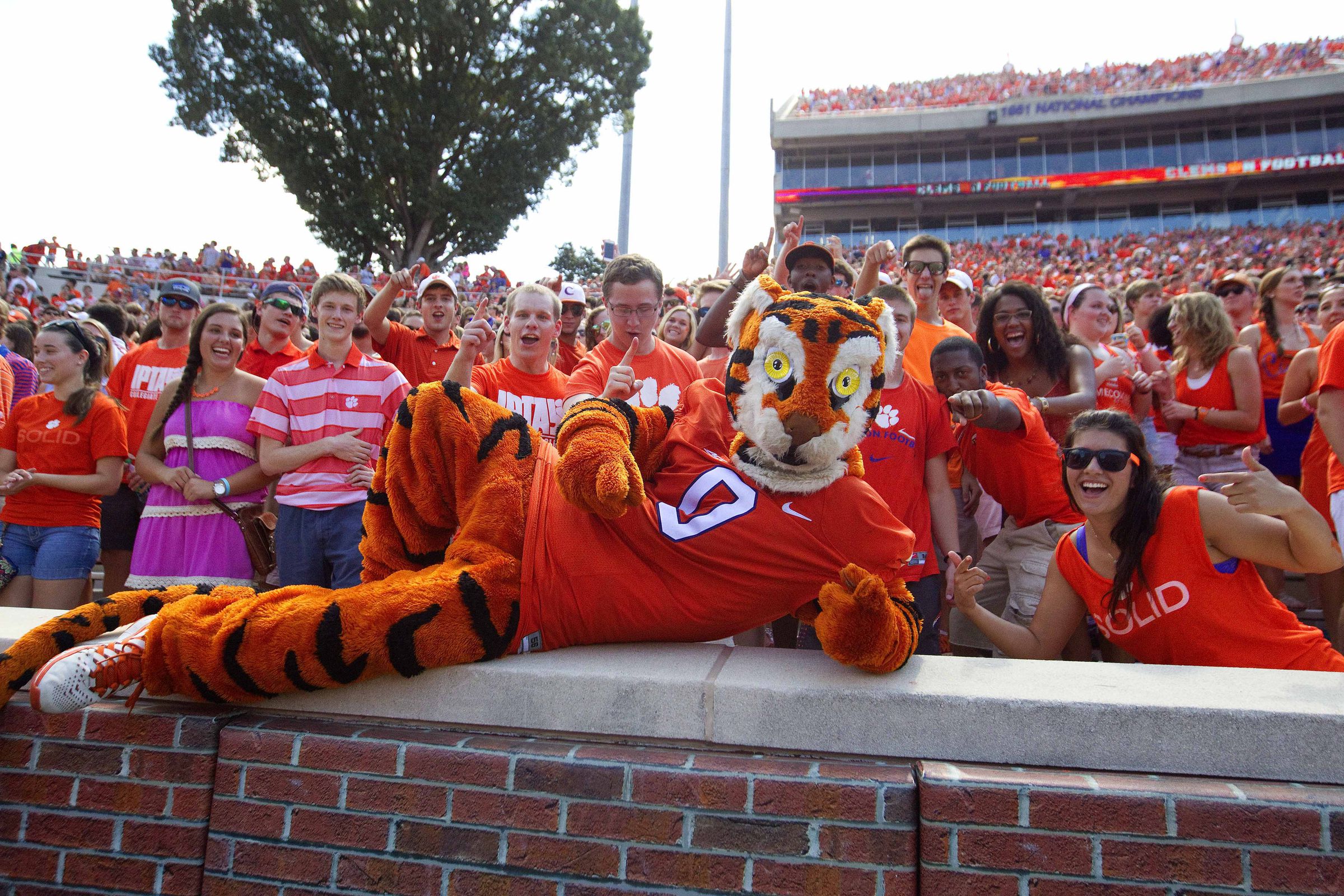 GAME 9: “WHAT ARE THOOOOOOOSE,” A CLEMSON SIGN MAKING FUN OF THE POPE READS

Clemson usually receives national attention when they play Florida State. This weekend, they get the benefit of being on prime time (as well as hosting College Gameday) for playing a game against a very good but very battered Notre Dame. The game itself is a barometer for both teams. Notre Dame has their #6 ranking to retain while the Tigers are seeking to prove dominance in a conference that could be the second best in the nation. It’s honestly a hard call to make as to who the victor will be. Clemson struggled mightily against a listless Louisville team. The Fighting Irish have managed to string together a number of impressive wins despite crippling injuries. It’s anyone’s ball game and it might be the second most entertaining game of the day behind West Virginia and Oklahoma.

Notre Dame fans ask where they can get a cream soda around here at 8:00 PM on ABC.

Stanford has been one of the more impressive progressions of the 2015 season. After mind numbing failure to find the red zone, they have now completed a heel turn as one of the Pac-12 North’s most efficient offensive squads not named Cal. The toughest defense they have played thus far was in Evanston but now they face the jaws of Jeff Casteel’s 3-3-5 defense. UCLA turned into mince meat with a balanced attack against the Wildcats and the Cardinal is likely to do the same. But, this game starts in the late, late shift and if we’ve gleaned anything from a Pac-12 late game, it’s that things can get a little weird after dark.