I am a Detroit Pistons fan. It should be said that I am an incredibly casual Detroit Pistons fan, and while I followed the team closely during its glory years in the ’00s, these days I rarely go more in-depth than watching their (exceedingly rare) national broadcasts, checking scores and reading Andre Drummond features that occasionally cross my Twitter feed.

This is only to say that I am explicitly not someone to offer any sort of depth or nuance in my opinion of the modern NBA. I watch the later playoff rounds, and generally know which players are exceedingly good or outright trash, but any sort of in-depth knowledge I have on the league predates Steph Curry’s time in the league. When it comes to watching pro basketball, I am all feeling and no head these days.

END_OF_DOCUMENT_TOKEN_TO_BE_REPLACED

Verb;  The instinctual response of fans and writers to small changes in a sporting team’s fortunes, especially in regard to those of the New York Yankees.

The New York Yankees will not win the American League East.  This is not an overreaction to the events of the last week.  The team which currently sits five and a half games behind them should be favored, and Yankee fans should be worried about which member of their depleted rotation will start the AL wild card game when Toronto celebrates its first division crown since 1993.

END_OF_DOCUMENT_TOKEN_TO_BE_REPLACED

This is the first in the TwH seven-part look at the MLB All-Star ballot. If you missed the intro from yesterday, you can find it here.

END_OF_DOCUMENT_TOKEN_TO_BE_REPLACED

If the Major League Baseball All-Star Game had a place in American History curricula, 11-year-old me would be a figure taught alongside Boss Tweed. The democratic nature of electing the Midsummer Classic’s starting lineups was intoxicating to the dorky kid who watched coverage of the 2000 Florida recount every day after school. I was a conniving little bastard and when it came to finding ways to stuff the ballot box, I took my lessons less from old Joe and Jane Stadium Usher, who’d hand out ballots at the ballpark than I did from Chicago’s Daley clan.

No strategy was beneath me. Paying friends a few quarters to punch out the bags of ballots I’d bring home from a trip to Candlestick? Check. Fabricating email addresses to run up totals in the early days of online balloting? Yep. I was a foolhardy kid who thought that my dirty tactics made a difference in who’d trot out to represent their league each summer, and I took that shit seriously. It probably would’ve been good practice for a career in politics.

Over the years, the dynamics of voting in players for the ASG have changed. Over the years, online ballots have eclipsed voting at the ballpark as the preferred way to select the game’s starters. Teams now solicit fans to pull out their smartphones, click an app a few times, and presto, send the hometown nine’s best to the game. The speed of voting online has made it more effective than even the most mischievous fan could manage via the old-fashioned, Bush v. Gore-inducing, punch card manner.

END_OF_DOCUMENT_TOKEN_TO_BE_REPLACED 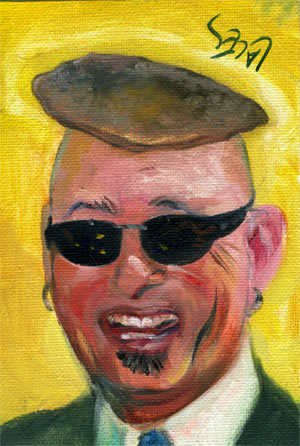 Any observer who doesn’t immerse himself in the intricacies of baseball’s free agency and player development structures should flip on his TV to quickly get up to speed.  There’s a well-known expert on the choices that GMs face, and he can be seen daily if you know where to look.  While MLB Network frequently has knowledgeable contributors from Baseball Prospectus, and even ESPN can trot out a great mind here or there, the fastest way is to find Howie Mandel prodding hapless Joe and Jane Game Show Contestant to throw away their guaranteed returns in hopes of hitting it big.

The current state of the free agent market, especially with regard to mid-tier, mid-career or older starting pitchers, presents largely the same choice a Deal or No Deal contestant would face.  If you’re excited by the idea of securing the decline years of a never-was-great hurler for the annual price of what the Rays will pay David Price this year, you are probably a local radio show caller or an out-of-work GM.  Barring that, you are understandably intrigued by the possibility of the unknown riches which lay in the cases that have yet to be opened during today’s episode of the hot stove game show.