It’s seriously 10:30 am on Opening Day. Can I get this post done before the first pitch happens in 2.5 hours?

If my math is right, this is the 145th season of Major League Baseball. It’s literally the only thing older than my father in law. You’d think that a league that’s been around for so long would be able to get the season opener right, but today is simply Opening Day. Last weekend, the Opening Series was in Australia (that’s not a misprint). Last night was Opening Night in San Diego (which involved a team that was in the Opening Series). Today is Opening Day. Have I lost anyone yet?

Anyway, baseball is soldiering along, senseless starts be darned. Because there’s really nothing that could keep me from watching, I came up with some storylines worth keeping tabs on from now through October. That’s right, baseball is gonna be around for a while. I’m not sorry if that’s not your thing.

END_OF_DOCUMENT_TOKEN_TO_BE_REPLACED

Indie Rock is a genre muddled with pretension and irony with some acts taking themselves more seriously than they should. Mac DeMarco has established himself as the polar opposite where everything is subject to ridicule and parody. His outrageous shows alone have become the stuff of legend – the most infamous one involving a drum stick that ended up in DeMarco’s hind parts. His goofy, gap-toothed grin is a disclaimer that almost everything will be tongue-in-cheek. Even the bands that DeMarco played with were gags from the get-go with names like Makeout Videotape. It seemed that, even as a solo act, he was only interested in weirding people out or making music for laughs with Rock and Roll Night Club.

The cover showed the reflection of DeMarco in a dirty mirror, smearing lip stick on his face. The songs inside were delivered in a sleazy, Elvis impersonation. But Rock and Roll Night Club proved to be an oddity as 2 displayed a more capable artist who had proficient songwriting abilities in creating hypnotic melodies, catchy hooks and subject matter that was not a novelty (see: “Baby’s Wearing Blue Jeans”). The songs themselves though were still playful but they sounded less like the id of a guy who described his own music as “jizz jazz”. After taking 2 on the road, playing the 2013 Pitchfork Music Festival and becoming part-time interviewer for MTV’s Weird Vibes series, DeMarco has followed-up his debut album with Salad Days.

END_OF_DOCUMENT_TOKEN_TO_BE_REPLACED

The Philadelphia 76ers are bad, and not in the Michael Jackson/Shaft way. The Sixers are now historically horrendous, on an NBA record-tying 26-game losing streak, but fans in the Illadelph are not publicly chastising Michael Carter-Williams or staging protests against Sam Hinkie outside the Wells Fargo Center. While they hang their heads in public, as in the picture above, the 76ers are smirking in private, the prospect of a too-bright future potentially awaiting. Elsewhere, Swaggy P is the victim of hubris, as so often happens, and don’t sleep on Dirk should the Mavs make the playoffs.

END_OF_DOCUMENT_TOKEN_TO_BE_REPLACED

We have arrived at the point of intense sorrow and unyielding insanity, courtesy of schools such as Mercer and Tennessee. Here now is the Sweet Sixteen update on the Tuesdays With Horry bracket pool, complete with all the requisite rage and aloofness of conflicting personalities and varying degrees of emotional currency.

END_OF_DOCUMENT_TOKEN_TO_BE_REPLACED

On Wednesday, around 3 o’clock, I was scrolling through Facebook when I noticed a status from Creative Loafing Charlotte which indicated that the mayor of our fair city, Patrick Cannon, was being arrested on charges of theft and bribery. I couldn’t believe it. In Charlotte? In sleepy Charlotte, NC? Where nothing happens? Where we are maligned constantly by national publications for being perceived as boring? Well, guess what: We are now in the ranks with some of the most esteemed, cultured cities of this United States and their histories of corrupt city officials. Washington, DC, New York City, Boston, Los Angeles and the like – they are about that life, and so are we!

END_OF_DOCUMENT_TOKEN_TO_BE_REPLACED

“…It is come to pass, that, as one saith in a brave kind of expression, the sun never sets in the Spanish dominions, but ever shines upon one part or other of them: which, to say truly, is a beam of glory…” –Francis Bacon

One by one, they fell. Jorge Lorenzo was the first to go, tucking the front on the first lap after getting a drive out of the corner that surprised him. Five laps later, Stefan Bradl went in a similar fashion. There was a surprising Andrea Iannone. There was the assertive Bradley Smith. There was, toward the end, Alvaro Bautista. When Valentino Rossi’s spirited strikes failed and the opening round of the 2014 MotoGP World Championship had finally settled in the Qatari night, they had all fallen, even if they’d stayed upright. They were not alone.

END_OF_DOCUMENT_TOKEN_TO_BE_REPLACED 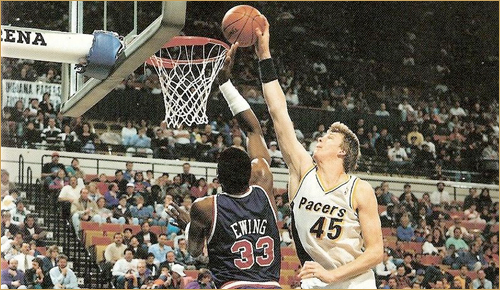 You may ask yourself, “Why, Blog Lord, is there a picture of Rik Smits and Patrick Ewing at the top of this week’s 3-Pointer?” There are a number of reasons, some better than others: firstly, I am going to the Netherlands for my final undergraduate spring break, and the Netherlands has produced exactly one (1) decent NBA player, Smits. This is a celebration of that. Second, ’90s NBA is best NBA, although we might be catching up with this era. Finally, it sort of looks like Ewing might block that Smits shot, which was probably the last great thing any Knick or Knick-related entity did on defense. Elsewhere, Phil Jackson and the Knicks are a teenage pseudo-romance, and the Heat and Pacers, sans Rik Smits, are struggling, but they’ve earned that. Also, we may finally have seen the last of one of the most brilliant point guards in NBA history.

END_OF_DOCUMENT_TOKEN_TO_BE_REPLACED

The ongoing grotesque carnival of human misery that is the New York Knickerbockers “basketball” franchise is at it again, with reports surfacing that the team met with 11-time NBA champion and maniacal guru Phil Jackson about possibly becoming the next head coach to stroll the sidelines of Madison Square Garden. No word yet on incumbent Mike Woodson’s reaction yet, though I have an idea of what it might look like. Elsewhere, the Lakers receive a full-on franchise posterization courtesy of their in-house rivals, and LeBron is not into sleeves.

END_OF_DOCUMENT_TOKEN_TO_BE_REPLACED 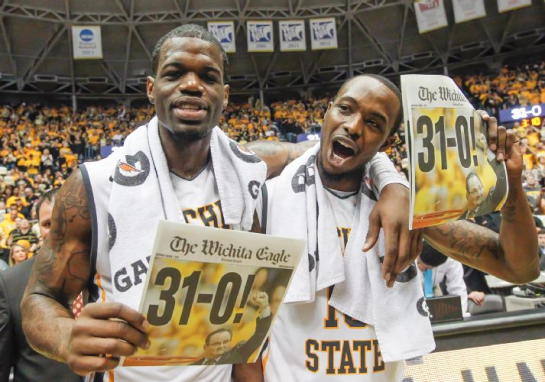 With a 68-45 drubbing of the Missouri State Bears last Saturday, the Wichita State Shockers capped off an undefeated regular season, the first since the Jameer Nelson-led St. Joe’s Hawks went 27-0 in 2004. The Shockers have lived up to their name, rising to #2 in the AP poll and sending waves throughout the country. This team is carefully constructed, with Gregg Marshall as its puzzle master, and it just might have the formula to be able to take the Missouri Valley Conference to the top of the mountain for one shining moment.