This week: Bret Bielema really does not care for that cheese dip that you made even though he unknowingly spilled it all over the front of his shirt. Cal shows up to the party with both brilliant Nobel prize thesis and a case of wine. Utah decided it would be funny to bring a cake just to smash it in Oregon’s face before walking off and saying, “O’Doyle Rules!” Also, Butch Jones’ maxillofacial surgery requires that you cut up his food before he eats so he doesn’t choke on it.

Picking a favorite in the 2015 Pac-12 race is a task that is about as daunting as choosing your favorite scene from Mad Max: Fury Road. This is because the scenes come at you in a wild succession that you can’t fully grasp the awesomeness of one before another comes roaring at you full throttle. When you start thinking of that scene with the arrival of the Doof Warrior you instantly remember the no man’s land chase through the canyon. The Pac-12 is similar in that your memory is affected by one brisk, exploding spectacle after another. This weekend, we received it in spades as college football’s early season Pac-12 showcase offered plenty of crushed metal and death rolls that kept trumping each other as the night progressed.

College Gameday’s broadcast from Tucson began as the sun started to rise over the desert. In those early hours, Desmond, David Pollack and Herbstreit all sounded off on the latest trending pick for the conference: Stanford.

The Cardinal essentially benefited from an offensive explosion in the Los Angeles Coliseum and Corvallis that has seen them go from second best in the North division to the conference’s one true Playoff hope. After this weekend, the Cardinal’s road to their first Playoff appearance looks a thousand miles away thanks to overwhelming performances provided by UCLA and Utah.

UCLA’s prime time performance against Arizona was predicted to be close given the questions surrounding the Bruins offense and the loss of defensive everything Myles Jack. The Bruins’ previous performance against BYU shook the confidence that a lot of people had in freshman Josh Rosen’s ability as a quarterback. Vegas’ line gave six points to UCLA as the favorite on the road and then started to move towards three points as Arizona announced impact player Scooby Wright would be back from a knee injury. There was also Rich Rodriguez’s incredible coaching history in Tucson against heavy favorites since that started to nagged the Bruins’ chances. All of the questions surrounding UCLA’s playoff hopes were answered when they scored a remarkable 21 unanswered points in the second quarter; the Bruins went into halftime with a 42-14 lead.

It didn’t help for the Wildcats that starting QB Anu Solomon went down in the second quarter with a head injury. From there, Rodriguez shuffled Jerrard Randall and Brandon Dawkins at the position with varying degrees of success against a UCLA defense that hounded Arizona all night. The Wildcats were only able to score 16 more points while the Bruins scored a touchdown in both the third and fourth quarter to put the game out of reach. Arizona was the disembodied corpse of hope that was done in by three turnovers and bad vision due to staring at the blinding, divine aura emitting from Chosen Rosen.

The Wildcats failed to force any mistakes out of Rosen as the freshman walked away from Tucson with zero interceptions recorded on his stat line. He instead racked up 19 completions out of 28 attempts for 284 yards and two touchdowns. He averaged about ten yards per pass and notched a 96.9 QBR. On the ground, RB Paul Perkins chipped away at the Wildcats defense with three touchdowns scored in short-field possessions.

If there was any doubt to how great UCLA was after BYU, the 56-30 drubbing of Arizona played like a king killing his advisors to prove his might. The Bruins looked every bit the dominant Pac-12 South bully that they were originally conceived to be heading into the season. They proved that they can still win games should Rosen make mistakes but as a November 21st date approaches with Utah, UCLA might want to make sure that they limit those errors as much as humanly possible.

By comparison, Utah’s beat down of Oregon was like watching a thousand bulldozers converge on a lone cabin in the middle of the Pacific Northwest woods. The Utes thrashed the Ducks 62-20 in Oregon’s biggest loss at home. Utah was a point away from handing the program one of their largest losses ever; the feat was last completed by the Nebraska Cornhuskers in Lincoln thirty years ago. This game was like watching a series of high flying car crashes with metal flying every which way and car parts smattering the landscape.

Utah obliterated the Ducks in such a dominating fashion that it was kind of mind-altering to watch. It was as if Utah made counterfeit Nike uniforms and posed as the Ducks for four quarters. They treated Autzen like Beijing and got away with intellectual property crime by putting up 21 points in the second quarter and then another 28 unanswered points in the third. Utes QB Travis Wilson threw for 227 yards and four touchdowns because down is up in the 2015 Pac-12.

The much celebrated centerpiece of Utah was always their defensive unit which managed to contain the Ducks to seven points or less per quarter. They were able to pressure a frazzled Jeff Lockie, who came in for Vernon Adams in the second quarter, and forced him to throw for an interception and forced a fumble. They were also able to force another fumble out of Ducks RB Kani Benoit on the Oregon 5 that set the Utes up for their final touchdown of the night.

The Ducks were held to 400 yards of total offense all night. Utah out gained Oregon by 130 total offensive yards proving that Pac-12 After Dark is a a real, Pacific-time oriented phenomena. Now, with two losses, Oregon looks completely out-of-contention for the Playoff with uncertainty on offense and a somewhat listless defense looking at games against Stanford, USC as well as a scrappy Cal team left on the schedule.

Utah, meanwhile, has bolstered their perception as fifth place also-ran in the gauntlet of the Pac-12 South to division contender. Granted, they still have yet to play a divisional opponent but their stock looks exceptionally enticing right now. Despite opening up a wild playbook against Oregon, I think they’ve exhausted all their tactics going into divisional play next week against Arizona. The Utes might be able to roll over Arizona and Arizona State but it’s a different task entirely to take on the teams from Los Angeles. Until then, the Utes have the benefit of being the most brilliant and striking display of sheer violence in a weekend of escalating brutality in the Pac-12. 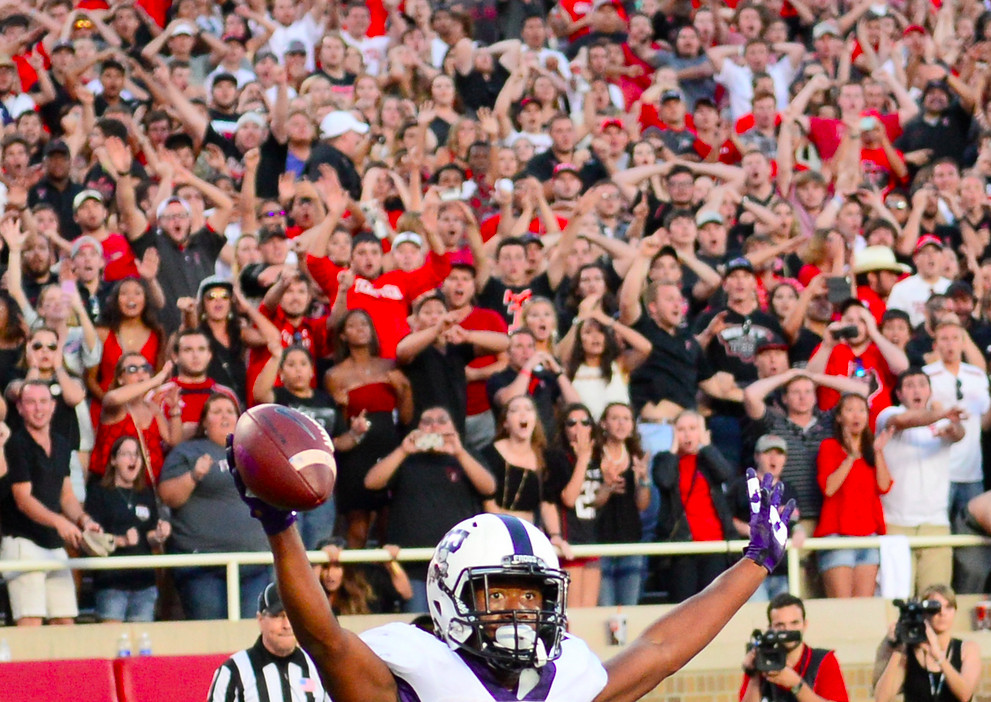 Texas Tech did something remarkable on Saturday afternoon: they stopped TCU in the red zone on 3rd and Goal with 29 seconds left and a four point lead. The defensive stop could’ve been one of two signature moments for a Red Raider team that has been defined by their offensive output rather than any stout defense. All they needed was one more stop to put away the third ranked Horned Frogs. What they learned was that the Football Gods can be unmerciful to the home team in Lubbock too.

Frogs QB Trevone Boykin saw receiving phenom Josh Doctson in the endzone and phoned a pass his way. The ball was tipped in the air as Doctson was accompanied by two Texas Tech defenders on the way to get it. If TCU’s Aaron Green was nowhere around, the ball would’ve dropped to the ground and Texas Tech would be four victory formations away from one of the biggest wins in school history. The ball, instead, landed in Green’s hands to shut the door on Tech. The final score after a futile hook-and-latter return by Texas Tech was 55-52 in TCU’s favor despite objections by way of tortillas.

The silver lining for Tech is that they are a vastly improved team from their disastrous 4-8 campaign last year. The Red Raider defense, while not stellar by any definition, can hold enough ground for Tech to get the ball back and score quickly on its opponents. They look like they can actually compete with forces like West Virginia, Oklahoma, and Oklahoma State this year with Patrick Mahomes taking snaps. The bad news is that they don’t get an opponent like Iowa State, Texas or Kansas to iron out any remaining kinks. Instead, Baylor comes to Lubbock to try and take some more air out of Tech’s bubble with a defense that’s defined, more or less, by the towering sentinel known as Shawn Oakman.

Baylor may also be the most convincing favorite in the Big 12 but that’s from the benefit of not playing an opponent to contradict otherwise. While Baylor’s defense isn’t quite world beating on its own terms, it’s definitely healthier and in a better position to shut down offenses than the razor thin ranks of TCU. Should Tech make it a win or a close game, their season’s outlook will be much more convincing of improvement than last year’s flailing debacle.

I cannot emphasize how much I liked Tennessee going into this season. I found myself hyping them up among friends and found reasons to think that they’d at least nudge their way to second place in the SEC East. It didn’t seem outside of the realm of possibility for this to happen given Florida’s rebuilding year, South Carolina’s regression and the perennial unknown of Missouri. The Volunteers were coming off a 7-6 year, a bowl win and Butch Jones’ recruits entering their third year in his system. The stars seemed to align for Tennessee to show some substantial signs of progress toward national relevance.

On Saturday, patience for this progress jumped out of the window as Florida’s Antonio Callaway ran 63 yards with less than two minutes left to edge out the Volunteers 28-27. The subsequent last drive by Tennessee put them within range of a damn near impossible 55 yard field goal for place kicker Aaron Medley. Medley, who never kicked a field goal over 50 yards, was sent out as an act of clawing desperation. The kick sailed wide and another symbolic game for the Vols ended in soul crushing fashion.

It’s hard not to draw parallels to the game against Oklahoma especially since Tennessee was up with 17 points at halftime and had all the momentum on their side. Jones, however, did all the same things that let the Sooners escape Neyland Stadium with a win. He twice settled for field goals even though two yards stood in between Tennessee and a first and goal. SBNation’s Bill Connelly pointed out that Jones played scared throughout the entire game against Oklahoma and it’s safe to say that he did the same in The Swamp; the one place where he absolutely needed a win. The Gators’ win streak now extends to 11 seasons while Tennessee goes back to Knoxville with games against Georgia and Alabama still on the docket. Jones’ win probability in these “progress games” are staggeringly against the Volunteers as the only rivalry game that could’ve swung in their direction found itself in the hands of the home team.

But, Tennessee’s loss is Florida’s gain as the Gators are now 4-0 under Jim McElwain and look every bit the part of division contender that Tennessee doesn’t. It’s a phrase that I never thought I would utter in the year 2015 but here we are. At this point, even Kentucky seems like a better pick for the SEC East champion than the mess happening up in the Smoky Mountains.