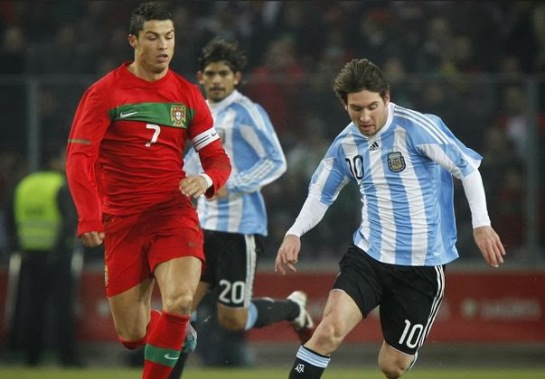 The last person not named Ronaldo or Messi to win the Ballon d’Or , the annual trophy given to the player deemed the world’s best (or, before they merged in 2007, FIFA’s World Player of the Year), was Kaká for his world-beating play with AC Milan and Brazil in 2007. I mention this not because Kaká is my all-time favorite player, though he is, but rather to properly characterize the level of dominance these two players have shared on an individual level and the longevity of that dominance. Except for 2010, when Barcelona players Andrés Iniesta and Xavi rounded out the top three behind Messi, the duo has finished in the one-two every year since 2008, with Ronaldo capturing the bookend years, 2008 and 2013, to Messi’s insane run of four straight.

Their individual successes mirror their victories at the club level, as Ronaldo has taken the transcendent, feverish game which first became apparent at Manchester United to Real Madrid, and Messi was the key scoring force in Barcelona’s unprecedented spell under Pep Guardiola, during which the team won 14 of a possible 19 trophies from 2008-2012. Their goal tallies are positively staggering: in the 2012 calendar year, Messi scored 91 goals in 69 games, for an absolutely stupefying rate of 1.32 goals per game. Ronaldo, meanwhile, is no slouch; he scored 48 goals in the 2013-’14 season, including a record-shattering seventeen in Champions League play.

They play foil to one another. The media portrays Ronaldo as the vain Greek statue, a tall and fit figure who dominates set pieces with flair, fire and perfect hair. Equal parts Alfredo di Stéfano, Luís Figo and Roberto Carlos,  he is the guy you would create in a soccer laboratory, the LeBron James of his game playing for an equally polarizing team. Messi, on the other hand, is the scoring wizard, the little genius of Ray Hudson’s bombastic explosions of verbiage who can dribble his way to a solved Rubik’s Cube, out of a Chinese finger trap and into the hearts of millions. Messi toys with the opposition in almost Garrincha-like fashion, though his movement is much more forward than it is lateral. He seems not to care about public perception, or anything, really, beyond putting a ball into a net.

Messi is the heir apparent to his countryman Diego Armando Maradona, the only man to truly single-handedly lead his nation to a World Cup. Maradona, of course, was the manager of Argentina’s ill-fated run to the quarterfinals in South Africa four years ago, and he has since been replaced. Still, his shadow will loom over the entirety of Messi’s career. That is, unless the Flea can bring glory to Argentina, the nation he left when he was eleven years old, one which has never quite completely adopted Messi as its own. For all his goalscoring prowess and dominance of the world stage at a club level, he has continually come up short when playing for Argentina, an impressive gold-medal performance at the 2008 Olympics aside. His first-ever national appearance ended less than two minutes after it began with a red card. He has never led his nation past the quarterfinal stage of the World Cup. He and Ronaldo each have one goal at the World Cup Finals, an abysmal record for the two most prominent players of their generation.

Ronaldo, meanwhile, does not have to follow in the footsteps of anyone in particular. He has carved out a place in Portuguese folklore by helping the team to its only runner-up appearance in a major tournament, at Euro 2004. A fourth-place finish in the 2006 World Cup in Germany seemed to signify brighter days ahead, yet that has thus far been an unfulfilled promise. Portugal bowed out in frustrating fashion to the eventual champions Spain by a count of 1-0 in South Africa, a feat it almost perfectly repeated in the semi-finals at Euro 2012, losing in penalties to La Roja. Ronaldo did not take a single penalty kick after jointly leading the tournament in scoring, with three goals.

There is also the question of supporting casts. Obviously, with soccer being a team game, neither man can do it himself, though we know Maradona’s “Goal of the Century” must flash before Messi’s eyes each time he receives a pass near midfield. Both squads feature talented players who can feed the ball to their point men and, more or less, know their place in the grand scheme of things. But this isn’t about them.

In sports, people like to throw around the word “legacy,” which loosely describes an individual’s influence on the whole of the game he or she plays and what kind of impact that person leaves upon retirement. For people like Pelé, Michael Jordan and Babe Ruth, legacy can direct generations of players to a sport and leave everyone else wondering if that sport’s ceiling has already been reached. Sure, Russell won more championships than Jordan, and Aaron would end up hitting more homers than Ruth, and Pelé stubbornly refuses to accept anyone but a Brazilian as the world’s best player. But how many hot dogs did Aaron eat in the dugout in preparation for slamming a baseball out of Fulton County Stadium? How many times did Russell wag his tongue on an earth-jarring, game-changing dunk?

Before the age of 30, both Cristiano Ronaldo and Lionel Messi have already left indelible imprints on the world’s most popular game. Kids will do their best to emulate their YouTube-captured moves from half a world away. They will wear down the blaugrana and striped Messi jerseys to a point beyond recognition, and they will tell show their barbers (or mothers) pictures of Ronaldo when going for a haircut. They will pick Barcelona, Real Madrid, Portugal and Argentina in FIFA just for the chance to button-mash inside the box with the two best players in the world.

In Argentina and Portugal, kids will take to the streets, announcing themselves as Messi or Ronaldo and committing just acts of football against their friends. Children of Buenos Aires will wear blue-and-whites and shoot into netless goals, proclaiming Argentina champions of the world on imaginary, last-second wonder goals. Pickup games in Lisbon will feature deep red and green shirts, complete with the number 7 and swatches of sweat. These young bucks will proclaim Portugal champions of the world on imaginary, last-second wonder goals. Both sets of kids could be right this summer, and both could be wrong. There is a chance that the one thing playground neophytes end up having over their heroes will be the feeling of winning a World Cup for the native land, even if only in their own minds.

For Messi and Ronaldo this summer, the one thing they may have to carry them might just be hope.