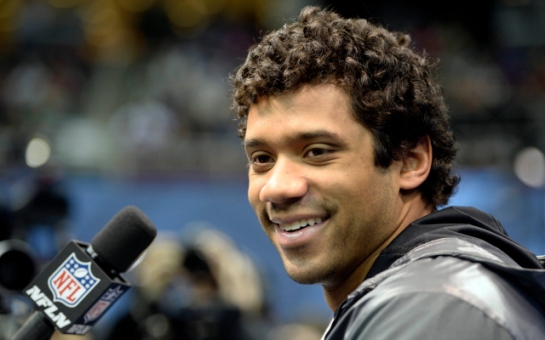 I have spent somewhere around six collective hours staring at different betting sheets looking for edges and clever ways to bet on the Seattle Seahawks. Now, we are about to put my actual money where my Internet mouth is.

Yesterday I made $18 betting the NBA, and that could’ve been $60 had I not gotten killed by Enes Kanter scoring a meaningless layup with six seconds left so the Jazz could lose by five points instead of seven, thus leaving my $22 bet on the Warriors -5.5 a big fat loser.

My allotted gambling funds increased to $238 and I intended to have it all in play come Sunday. But as I looked over the betting sheets, and found more and more bets to bet, I realized I might have to use the term “allotted” loosely.

I’m totally fine with this.

Below is every bet I made on Super Bowl XLVIII, plus a bit of commentary and maybe even an attempt at humor or actual insight to explain my reasoning.

If you have no rooting interest in the Super Bowl, I ask that you send all of your positive energy in my direction. You might think that football is a place where grown men get paid millions of dollars to move an inflated piece of leather back and forth across a meaningless plane, and that’s fine, I totally get it. But I’m just a kid trying to write a column and make a few bucks.

And if I make enough bucks, I can go see Kanye West in Atlantic City.

I need you on my team. For Yeezus’ sake.

We have the facts. We’ve done the research. We’ve been carried this far by RUSSELL HUSTLE BUSTLE WILSON and have no intention of stopping now.

Here we go. Deep breaths. Everything is going to be dope.

When I started gambling in middle school, a good amount of my addiction was due to my tendency to stay up late. An Oregon/Stanford basketball wouldn’t start until 10pm, and betting on it gave me something to do until midnight. Unfortunately, 13-year-old Tyler had no idea what was good with Pac-12 basketball, so I really didn’t care which team I took.

To alleviate me of the pressure of picking a team, I got in the habit of texting a pretty girl and asking her to pick between the two. This served not only to pick my side, but also as an excuse to text pretty girls and have them think I was mysterious and dangerous.

I haven’t matured much in the past nine years.

So when I want to gamble on a game but don’t have a strong opinion either side, I text a pretty girl. It’s one of my moves. And check it out, it totally works.

Nailed it. Mysterious and dangerous. Plus, if we hit tails, I can buy that girl a drink.

One more thing – I had to jump around to three different casinos to find a book that was taking bets on the coin toss. Just know that I am committed to this.

In an attempt to involve the public with my column, I posted a Facebook poll asking which side I should take on this bet. It worked, but just barely… garnering a grand total of three responses.

The good news? It was a unanimous YES! There WILL be a score in the first five minutes and thirty seconds of this game! Thanks to my friends Brian, Kristin, and Ray for helping me out.

You know what they say: Real friends participate in your Facebook polls.

[Note: This bet is not pictured because I was waiting for more friends to participate in my Facebook poll before posting.]

I always liked this guy. Has he scored the first touchdown of a game this season? Nope. Not once. But he has five on the year, and snagging him at 12/1 just felt right. Believe in the vibes. 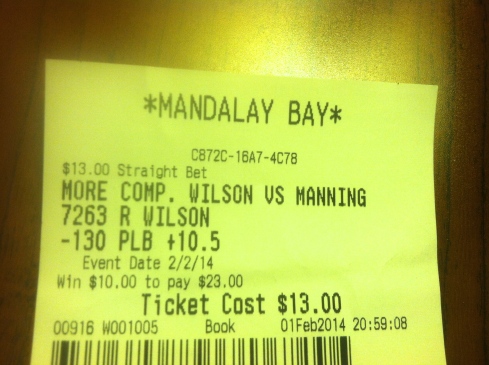 In this bet, we literally have the forces of good going toe-to-toe with the forces of evil. And the good is getting spotted with +10.5 completions! Always bet on the good when they are double-digit dogs. It’s the oldest rule in the gambling books, established when David beat Goliath as a +9000 longshot.

RUSSELL HUSTLE BUSTLE WILSON is throwing at least two touchdowns in this game. As I established earlier in this column, he is throwing the first touchdown of the game to Doug Baldwin (remember: believe in the vibes). Then, probably sometime in the second quarter, RUSSELL HUSTLE BUSTLE WILSON will nail a corner fade to Percy Harvin who will touch two feet in the end zone and immediately be crushed by a linebacker.

Vegas offers props on the specific number of total yards a quarterback will throw in the Super Bowl. If you only bet on one of them, chances are you’ll get screwed, similar to the guy who sees a GE refrigerator on the initial showcase in Price is Right and guesses $600, only to have the girl next to him yell out “$601!” If you only pick one of these yardage slices, you have an awfully narrow window. So instead, you pick a range.

I messaged my Coachella partner in crime Ray Sheerin earlier today while he was at work, initially just to inform him that our flight to Indio was officially booked and that this Spring is going to be all sorts of dope. But I had been thinking about boxing these numbers and wanted his thoughts on the matter. I asked him, “Top of your head, how many pass yards does RUSSELL HUSTLE BUSTLE WILSON have on Sunday? Just give me a number.”

Earlier in the week, Ray had asked if I could possibly take the $80 I owed him for buying our tickets to Arcade Fire in Philadelphia (seriously, this Spring is going to be all sorts of dope) and throw it on the Seahawks. At the time, I didn’t have the cash. But then I broke a promise to myself and sat down at a blackjack table, and lightening struck.

All of a sudden, I had the cash.

So I pitched him on splitting this bet with me, and he agreed.

We’re on each other’s team. 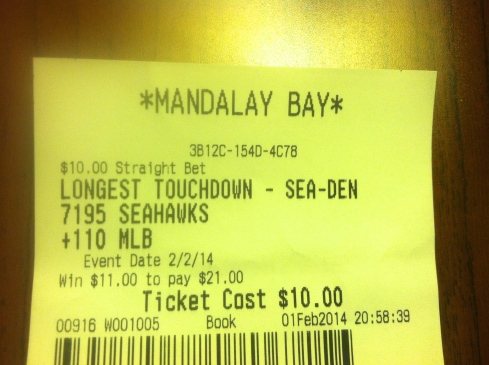 So sometimes in order to plan on how to gamble your real money, you have to delve into the realm of fantasy. You must, if you’ll indulge me, get hypothetical.

With such a plethora of prop bets on the table, it helps to imagine how you think the game will play out in fairly specific detail. For instance, I think the Seattle defense will shut down any long throws that Peyton tries down the sideline, forcing him to keep to crossing routes and check down passes for the majority of the game. On the other side of the ball, I have faith that RUSSELL HUSTLE BUSTLE WILSON will be able to save a few broken plays and pull off some miracle akin to his ridiculous play against the Niners two weeks ago. Plus, I think Marshawn Lynch is good to go full Beast Mode and break out for a forty yard gain at some point during the game.

Between all that, I like Seattle to score a pretty long touchdown.

Related to the logic rambled above. I believe the Seattle defensive game-plan will be to keep Peyton off the field. Meaning more possession time for the Seahawks. Pretty basic. Possibly pretty stupid. 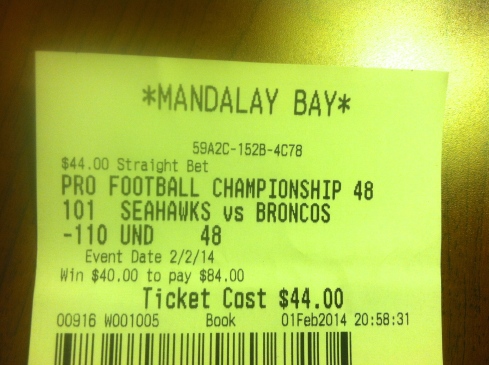 Earlier today, my pops and I ate at the Venetian. While exploring their sportsbook, I saw that they had the total listed at 48. I was thrilled. I had seen the number hung at 47.5 all weekend, and while I was going to bet the under regardless, the difference between 47.5 and 48 is pretty big when it comes to totals. For a second, I thought that I had found the last 48 standing in Vegas. I walked up to the window ready to place my bet.

But something didn’t feel right.

I’m a big believer in energies and vibes and even “jujus” as a fairly gregarious yet delightfully friendly Canadian continued to call it at the blackjack table last night.

And while I was standing at the window, $44 in hand, the juju was way off.

So I walked away, willing to accept losing a valuable half-point on my total bet for the sake of some positive energy at another casino.

Lo and behold, as my pops and I strolled into Mandalay Bay to place all of my props, my eyes rose to the betting board to find that their total had moved to 48 as well.

And oh man let me tell you – There was tons of positive juju up in that piece. 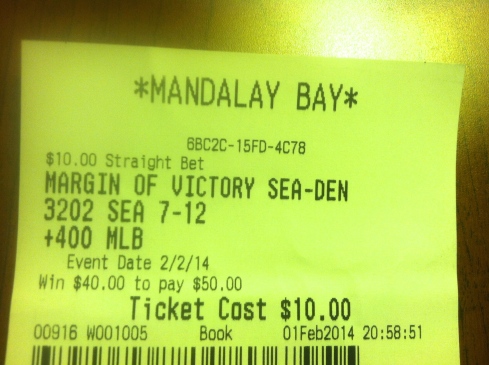 We’ve been blessed with a slew of nail-biter Super Bowls in recent years. This season, the stage has been set for another one. So why not say screw it? You should already know I adamantly believe in the Seahawks. Let’s see if they can flip the script and win this one by ten.

This is going to be such a fun ticket to cash in if I’m right.

Well, you made it. I’ve just been watching you make it. And it’s been great. I can’t tell you how many times you’ve brought me out of my seat over the course of the season, but each time it happened, my faith in you was renewed.

I believe in you RUSSELL. I believe in your HUSTLE and your BUSTLE, so much so that I have mentioned it approximately 384 times in the past four months.

You were a constant for me as I travelled the world. No matter what city I was in – Barcelona, London, Paris, Philadelphia, and now Las Vegas – you, along with Kanye West, were my rock.

Do you know how many people I mention in the same breath as Kanye West?

In a few hours, you will take the field with your compatriots – Richard Sherman, Marshawn Lynch, Steven Hauschka. They all believe in you.

And so do we RUSSELL. So do we.

Ray and I are going in on this together again. We aren’t taking the points, because if you lose by one or two points then goddammit we don’t want to win.

We want you to win RUSSELL.

We know you can.