You may or may not have heard about a female bearcat cub that was born recently at the Nashville Zoo and is, right now, at the Cincinnati Zoo, sitting nameless. Eventually, that cub is going to be the live mascot for the University of Cincinnati Bearcats, perhaps the highest honor any bearcat can receive in the state of Ohio.

Today is the very last day for name submissions, for which there are a number of avenues: commenting on Facebook or Instagram seems most effective. We here at TwH want to take this opportunity to announce our choice for that bearcat’s name: Grandma Excellent. This peculiar selection came about in the stupidest, most 2019 fashion.

A few weeks ago, I was talking with my oldest, not older, brother on GChat, just going back and forth on the various things that people in power have forced us to see via algorithms and such, when he brought up that the Zoo was holding a naming contest. Here, slightly abridged, is the exchange that followed: 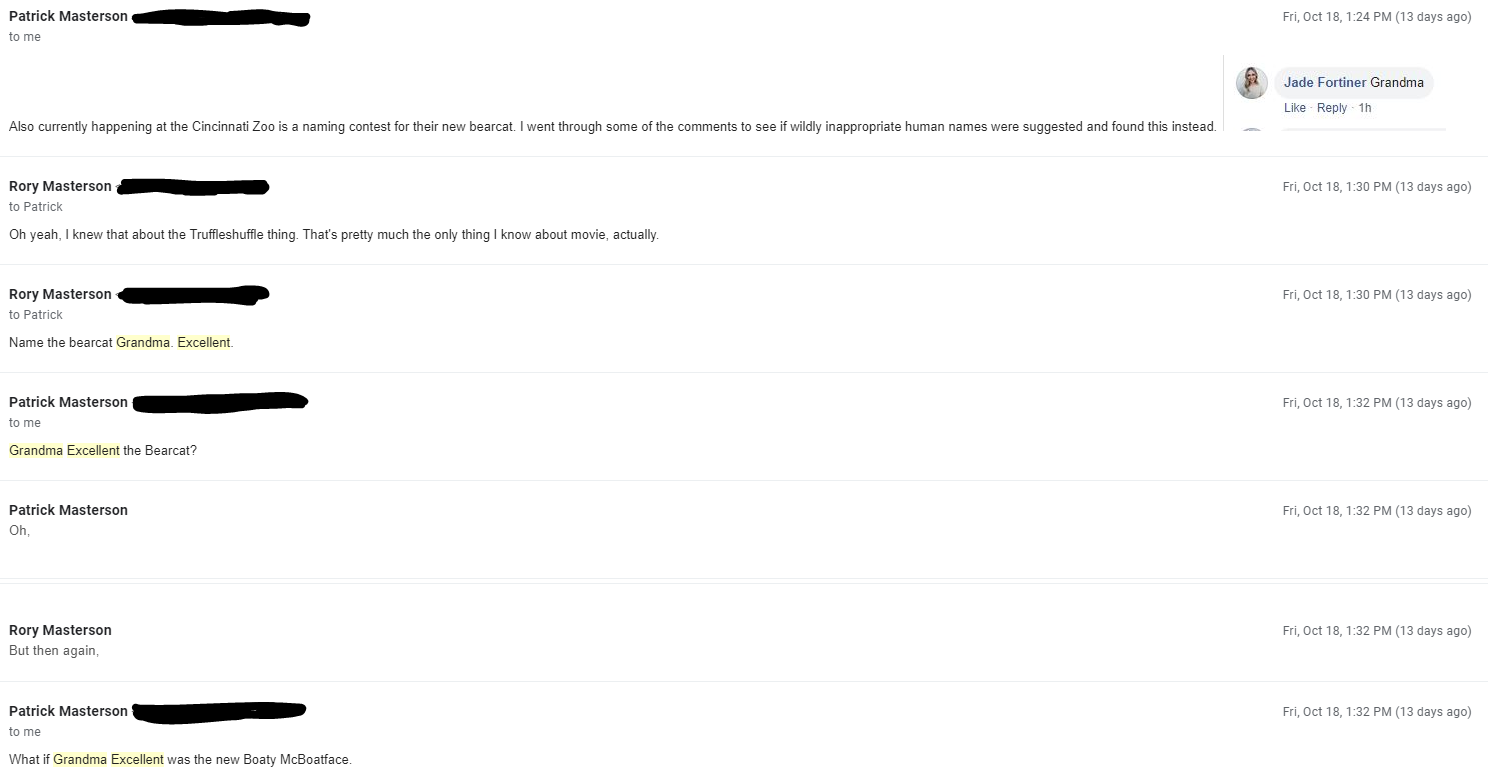 No idea if I can make this screencap any bigger

This is, of course, a wildly irresponsible approach to choosing names for bearcat cubs, particularly those whose time in the spotlight is fast approaching. Grandma Excellent would suffer the wrath of the rest of the American Athletic Conference, at least temporarily. And who, in truth, is cleverer and more whimsical in equal measures than a student at Southern Methodist University, a school which once received a full-on death penalty for its own football team? I submit to you: none.

But then again: have you ever looked at the actual names of dogs at the Westminster Kennel Club Dog Show? Or literally any horse that has ever won a Triple Crown race? This is not as bad as the overwhelming majority of those. Rancho Dobe’s Storm and Funny Cide can remain seated; your numbers will be called.

So, if you are so inclined, join us in this final push to name that bearcat Grandma Excellent. After today, the bearcat team – presumably, the ones at the Zoo and not a bunch of college athletes, although the latter might be more promising for our purposes – will choose its two favorite names of the thousands submitted and hold a public vote on that. We will update this post to reflect that if and when we get that far.