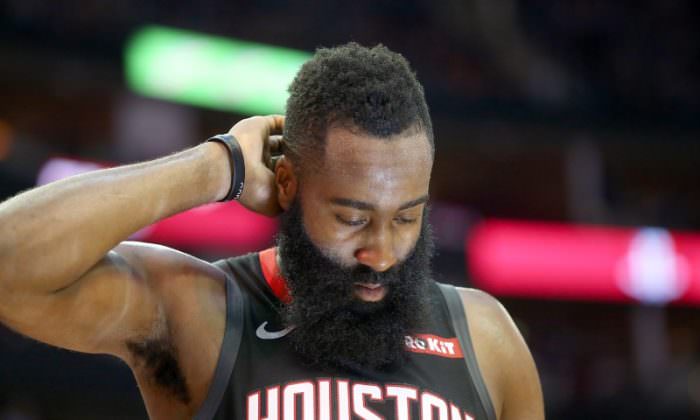 Just a few short months ago, the Rockets had the Warriors at wit’s end in the Western Conference Finals. Via a savvy mix of switch-everything-whenever-possible defense and the sleek offense which D’Antoni designed and which Harden’s oddball mastery enabled, the Rockets found themselves up 3-2 on the defending champions, and they hadn’t even needed a timely Draymond Green suspension to do it[3].

Then, of course, it all fell predictably apart. The first harbinger arrived when Chris Paul suffered an injury that ended up keeping him out of the remainder of the series. After running Houston out of the arena in Game 6, the Rockets took an 11-point halftime lead in Game 7 before going on a truly unprecedented cold streak of three-point shooting, missing 27 in a row at literally the worst possible time all season.

It was a catastrophic end to a year-long mission to solely beat Golden State. Rockets general manager Daryl Morey expressed this desire publicly, referring to it as an “obsession.” In the offseason, Houston lost key contributors in Trevor Ariza, Luc Mbah a Moute and Ryan Anderson; in their place came Marquese Chriss(?), Michael Carter-Williams(??) and, of all people given his prior, muddy Knicks history with D’Antoni, Carmelo Anthony(‽). It wasn’t going to be the same, and it may not be pretty, but given Morey’s track record of making the most out of things, maybe it would work.

It has not worked. They have lost five games, all at home, by an average of 14.4 points, with only a three-point loss to the Los Angeles Clippers saving that margin from being much worse. They have yet to win a game at home; they lost only seven games in the Toyota Center all last season. After leading the league in Net Rating a year ago, the Rockets sit at 25th now. The teams behind them are all likely lottery-bound: Chicago, Dallas, Cleveland, Phoenix and Atlanta.

It isn’t quite dire just yet, but it’s getting there. Chris Paul, a 33-year-old man and himself a professional agitator, let Rajon Rondo get into his head, phantom saliva or not. Eric Gordon is shooting 23% from distance on nearly eight three-point attempts per game a year after again being one of the best sixth men in the NBA. The Gerald Green Renaissance is officially on hold.

It gets worse. After finally accepting a role coming off the bench for the first time following an awkward, problem-filled season with the Thunder, Anthony is jab-stepping his way to some of the worst shooting numbers of his career. Marquese Chriss may as well be Peter Chriss, having only played one game and eight minutes so far before getting his fourth-year contract option declined.

P.J. Tucker has been as solid a defensive rock as ever, but he’s 33, and he’s never been able to account for much offensive production. No one could’ve expected that “Ryan Anderson ain’t walking through that door” was going to be a viable and logical thought with regard to this iteration of the Houston Rockets.

Last season may as well be last century. Now, Harden is sidelined and likely won’t return until at least Saturday, against the Bulls. If so, maybe that will be the catalyst necessary to ignite the fuel for this team.

Speaking of which: there is the Jimmy Butler situation, which may be resolved at any time, without notice. The Rockets have reportedly offered four first-round picks to the Minnesota Timberwolves in exchange for Butler, an upcoming free agent and vocal Minneapolis malcontent. Tom Thibodeau has thus far been unwilling to engage; the picks would likely feature protections of some kind, particularly on those in 2023 and 2025[4].

Maybe Butler could bridge the gap, replicating some of what Houston lost on both sides of the floor. Maybe Thibodeau convinces Butler to work things out with Karl-Anthony Towns and Andrew Wiggins. Maybe Glen Taylor will override Thibodeau and rage-trade Butler to Orlando.

With or without Butler, the Houston Rockets need to pick themselves up, dust themselves off and start acting like something resembling the wildly efficient basketball savants they were a year ago if they are to stand any chance of even facing the Warriors in the playoffs, let alone beating them.

Predicting the Rockets to go careening off a ledge like this before the season would’ve been a fool’s wager. Now, like so many other things in the NBA, it has come to fruition. Harden returning healthy is the first step. The rest, whatever that may comprise, will follow.

[1] While, of course, setting the single-game record for three-pointers

[2] For whose success we are all rooting—!

[3] Though, an Andre Iguodala injury didn’t hurt the Rockets’ cause