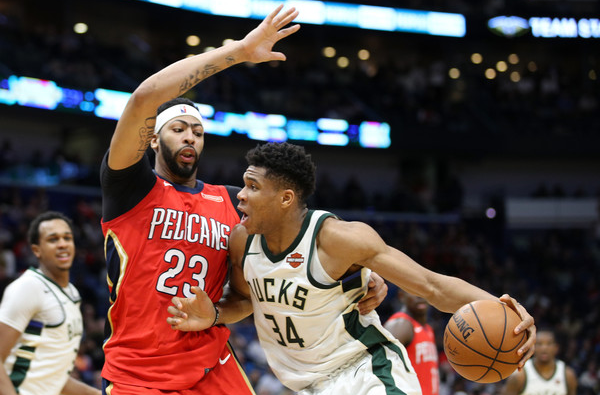 They said it was coming, but then – they tend to say a lot of things that don’t end up coming to fruition, don’t they? The Industrial Revolution presented us with a future that increased efficiency in equal measures, counterintuitively, with the waste they created; electricity allowed us to light, to heat, to dance into the night and passively allow dawn to become more a frame of reference than a time; Future is called Future, but he lives in the present, so what, or when, is he, exactly?

Health, though, is the great equalizer, one never to be fooled by fancy gadgetry or horse economics, ailments simultaneously unpredictable and inevitable. Anthony Davis has missed a combined 82 games out of 492 since he entered the league with the now-New Orleans Pelicans. That equates to a full regular season of NBA basketball. Comparatively, the Milwaukee Bucks’ Giannis Antetokounmpo has missed 17 games of a possible 414 after entering the league a full season after Davis.

These two are the (extremely early, but completely veritable) frontrunners for MVP this year. What separates them on the surface are their respectively unique and valuable skillsets, but what may very well make the difference between them in this particular race is that ever elusive, despicably cunning bill of health, springing up for you to care at only the most improper times.

Both Davis and, to a far lesser extent, Antetokounmpo, received various future-leaning accolades upon entering the league. Each simultaneously embraced and fought against the stereotypes inherent to their respective positions, both on and off the court, fighting to prove themselves and the worth of potential players like them, of which, to date, there are roughly as many as you have fingers on your hand. That’s one hand, by the way.

As the leader of the first largely one-and-done collegiate team to win a national championship at the University of Kentucky, Anthony Davis entered the league with low-post offensive skills, defensive instinct and the nuanced-playmaking approach of a guard after having been one for most of his life. He averaged a double-double to go along with 1.3 assists, 1.4 steals and an absolutely eye-popping 4.7 (!) blocks per game. He won a lot of awards that sound like collegiate men’s basketball player awards, all while going 3-20 from the collegiate three-point line. He was as much a finished and complete player as he was a project soon to be molded in the NBA[1] and, as such, the then-New Orleans Hornets drafted him number one overall.

As the best Greek prospect in a talented but nebulous field of then-esoteric European players, Giannis is perhaps the last, best example of someone whose precise skills left as much to the scouting imagination as he did in the early aughts. The idea of “grainy,” imprecise videos ceased with the omnipresence of the iPhone, at least in nations and communities in which basketball would figure to be prevalent; with that, scouts could let some of their burden be eased, and the Bucks took their chance on him with the 15th pick in the 2013 draft.

Giannis’ track to the NBA remains astounding, and his progression therein the same. Davis’ seemed preordained; the only thing that has seemingly held him back from his still-limitless potential has been, according to ex-NBA commissioner David Stern, “lousy (New Orleans Pelicans) general manager” Dell Demps.

In 2015, it seemed that Davis was on the precipice of preeminence. He led New Orleans to the playoffs that year, unceremoniously being disposed of in the first round at the hands of the first great Warriors team, that of the Harrison Barnes Era. The Pelicans big man has finished in the top five of MVP voting three out of the last four seasons, missing only in 2016, when he played but 61 games. It was his least-ever thus far, but still: 61 games won’t win you awards in 2016 like it did in 1977, Bill Walton.

He’s been great, he’s still great and it’s insane that he is still getting better. At 25-and-a-half (March 11, 1993, for whatever that’s worth to your aging self-judgment), Davis is  averaging 30.3 points, 13 rebounds, 5.3 assists, two steals and, Wile E. Coyote-like gulp, 3.3 blocks per game.  We are three games into this, yes, so take it for what you will, but now is also prime time for overreaction, and no player this side of LeBron and Mike has ever been more prime for preemptive overreaction than Anthony Davis, who is currently playing like both an MVP and the Defensive Player of the Year that his destiny would also seem to prophesy[2].

Long defined by his overwhelming humaneness, as a seven-footer with an even longer wingspan and an even-longer-than-that gregariousness, Giannis has made a career out of making the best of what’s around. It just so happens that this edition includes head coach Mike Budenholzer, a certified basketball genius, and a healthy and willing supporting cast of characters including a borderline-All-Star-when-healthy in Khris Middleton, the presently-happy Eric Bledsoe, Malcolm Brogdon, Brook Lopez, Ersan Ilyasova and a variety of youngish, rotation-worthy NBA players around whom the Bucks can feel comfortable building.

Where the – as of this writing – 4-0 Bucks and 3-0 Pelicans go from here depends mostly upon the backs of their two vastly different, yet similar bastions. Giannis tends to attack the basket in a LeBron-meets-Strong Armstrong fashion, though he has also thus far shot more three-pointers per game than at any prior point in his career. Davis expands the paint simply by existing, utilizing savvy post moves when close enough but increasingly stretching the bounds of possibility even into his seventh NBA season. Not to mention the fact that he is 3-for-4 from three so far, a season after shooting a career-best 34% from distance on a little over two attempts per game.

Milwaukee and New Orleans, respectively, are lucky to have them. This is beyond dispute. How lucky, exactly, will be a debate measured in trade proposals over the next year or two, or three, or five.

With Jrue Holiday at his side, Anthony Davis has proven impervious to the departure of DeMarcus Cousins, his seeming lifelong basketball soulmate. He was always going to be great, but now, he has the space to define his own greatness. He is averaging career highs in points, rebounds, assists, blocks and steals, as well as peaks in true shooting percentage and rebound, assist, block and steal rate, and only health could possibly keep him from setting new benchmarks in at least three of these, if not more.

Next to a contract-year Khris Middleton, Giannis Antetokounmpo sure looks like the boundless point-forward-center we all insisted he ought to become if he were to be worth a single damn at all at the beginning of this decade. Giannis is averaging career highs in points, rebounds and assists, with blocks and steals close behind. His three-point aggressiveness (3.8 attempts per game!), despite not being met with effectiveness (a career-low 6.7% from distance thus far…), is nevertheless encouraging in terms of his confidence.

Plenty of people portend plenty of truly awful things, real, imagined and otherwise – may I interest you in some light reading regarding the literal end of the universe, perhaps? Alternatively, they said that Anthony Davis and Giannis Antetokounmpo were going to change the NBA and, by virtue of doing so, the state of basketball, not unlike Steph Curry, James Harden, LeBron James, Kevin Garnett and others in recent memory have already done. How high these kites fly keeps their electric charges rushing forth, and the MVP will largely be dependent upon their respective abilities to keep the light on.

[1] Not for nothing, but also one that should today be a Charlotte Hornet, alongside Kemba Walker. Imagine that, and then forget it immediately. I digress.

[2] Anthony Davis is also, already, the subject of trade rumors ahead of his 2020 free agency. It has been among the most talked-about subjects within NBA circles since literally 2015, when he signed his previous extension. That is not Dell Demps on the phone, by the way.