From the start, it seemed like Fate may have placed an improbable bet on the Cubs, with first baseman Dexter Fowler hitting a leadoff home run in the first inning for Chicago. Cleveland tied in the bottom of the third, only for the Cubs to put up two more in the top of the fourth. The teams each allowed two runs in the fifth before Chicago’s veteran catcher David Ross, in his final Major League game, smacked a home run to put his side, and the weight of a 108-year intermission between titles, ahead 6-3[2].

Fate, however, is a synonym for inescapable death, something every Cubs season for over a century had faced. First, Brandon Guyer hit an RBI double off the typically dominant but drained Aroldis Chapman. Then, when Rajai Davis hit a two-run home run to tie the game 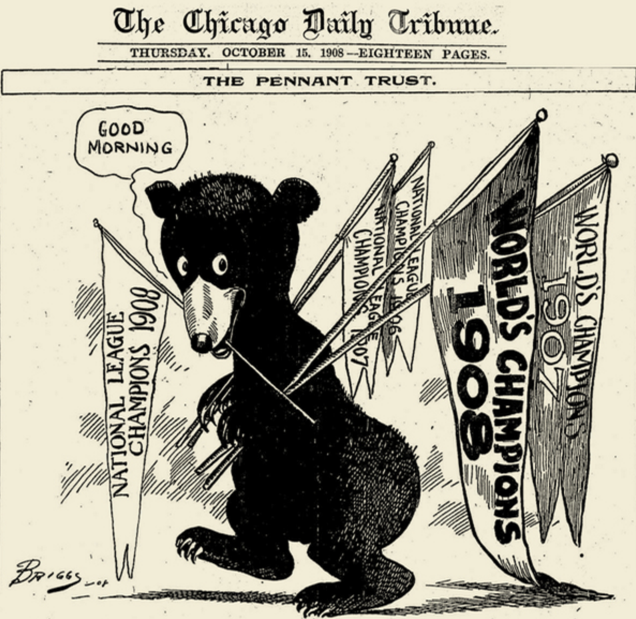 for Cleveland in the bottom of the eighth, you, I and every human being with even surface-level knowledge of the history of the Chicago Cubs felt a familiar chill. These are the Lovable Losers, and Lovable Losers they shall stay, forever and ever, Amen.

Tied at six and headed for extra innings with momentum firmly on Cleveland’s side[3], the skies opened, rain soaking the crowd in Progressive Field. It was sacramental, the deluge cleansing the Cubs of their various sins.

As we found out later via a Tom Verducci story for Sports Illustrated, Chicago held a meeting during the rain delay during which underperforming rightfielder Jason Heyward delivered a speech to his teammates. First baseman Anthony Rizzo would go on to say that the rain delay was crucial to the team’s success, that they would not have won without it.

From there, all it took was the completion of a miracle. Kyle Schwarber, whom Cubs general manager Theo Epstein had categorically ruled out due to a torn ACL and LCL as late as August, led off with a single before being replaced by pinch runner Albert Almora Jr. Kris Bryant pushed Almora into scoring position with a fly out before Anthony Rizzo was intentionally walked.

Already a reigning World Series champion with the Kansas City Royals, Ben Zobrist stepped to the plate, driving in Almora with an RBI double. Following an intentional walk to Addison Russell, Miguel Montero drove in what proved to be the decisive run, his RBI single scoring Rizzo. Elsewhere, Satan was said to be reaching for a coat in his closet, the temperature having suddenly dropped precipitously in his home.

A two-run victory with three easy outs in the bottom of the tenth would not have been fitting. At the risk of giving Cubs fans on the brink of watching their dreams fulfilled heart attacks, Carl Edwards replaced Aroldis Chapman and got two quick outs before walking Guyer, who then took second on defensive indifference. Rajai Davis singled, bringing Guyer home and drawing the lead to one run.

Mike Montgomery relieved Carl Edwards and executed what will be remembered as the greatest 0.1 IP save in Chicago baseball history. Two pitches at two outs yielded the third, and that was it. Hell had become Aspen, welcoming winter enthusiasts for seasonal delights.

Cubs fans get the most out of this, of course, but a series like this reminds everyone else why baseball is ostensibly the national pastime. What once was can be again, despite PEDs and lengthy games between cellar dwellers in August and Joe Buck. 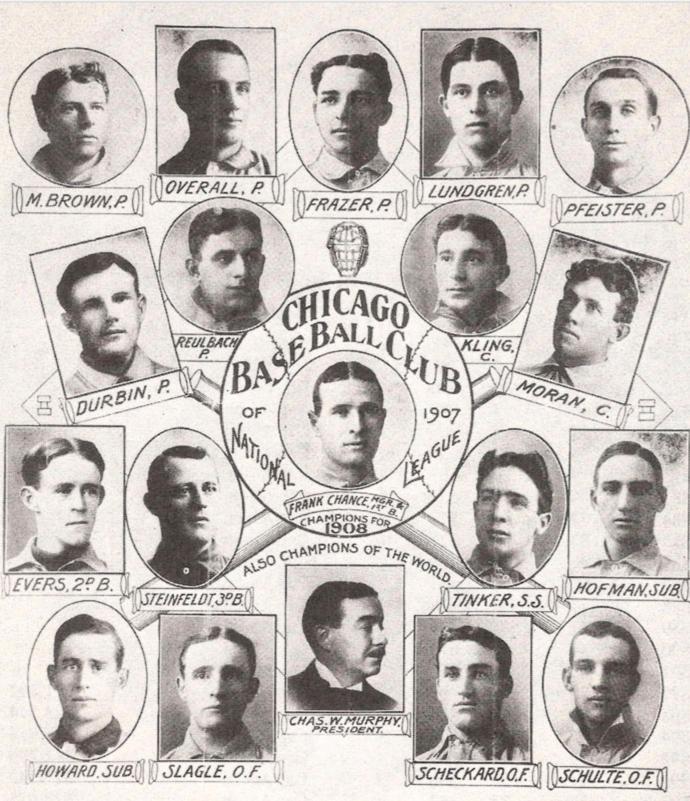 In the last twelve years, the three franchises with the longest championship droughts all won a title. With all due respect to the 2004 Boston Red Sox and 2006 Chicago White Sox, however, this one feels especially transcendent.

Having been an integral part of both Boston’s and the Cubs’ curse-breaking, Theo Epstein has successfully taken an analytical approach to a game perhaps more shrouded in superstition and mysticism than any other. As TwH’s own Jill Pellegrini noted, he has few mountains left to climb. Perhaps literal Everest would be a nice target, but – people have already done that. Who better than Epstein, then, to attempt to decipher the Voynich manuscript?

As for the team itself: the Cubs collectively, and every member of this team individually, could bat .000, rack up 27.00 ERAs and lose every single game for the rest of their careers, and it would not matter. The names involved, from Bryant and Rizzo to John Lackey and Jon Lester to the mad genius himself, Joe Maddon, are now etched into the hearts of every Cubs fan everywhere. Never again will these people have to buy themselves an adult beverage in the city of Chicago; the value of the memories they created far exceeds the price of a single Old Style, anyway.

After a summer of 3-1 lead jokes booming from suddenly confident Cleveland sports fans at the expense of the Golden State Warriors, the Chicago Cubs reminded us that karma is the most unholy of mistresses. Cleveland could very well be back in the World Series next year to end its own, now league-leading, title drought, but nothing is guaranteed. Just ask the Cubs.

The 2016 Chicago Cubs have absolved themselves and their fans of the losing mentality which defined them. “The last time the Cubs won the World Series…” jokes, like 3-1 lead jokes, are dead, the horse having long been shipped to Elmer. What the future holds, and whether this young core fashions a dynasty as many seem to think it could, will not matter. Nothing like this can ever happen again, at least not until the next 108-year championship drought comes along, spurring conspiracy theories concerning scapegoats and real goats. For a moment, for a lifetime, the Cubs made the confines of 2016 feel a little more friendly.

[1] By the way, they continue to surprise – they just finished their first four games in Champions League play by becoming the first team ever to shut out its first four opponents. Lions roar.

[3] How many times in the last half century of sports could we have said that before 2016?