Filed under “nothing we don’t already know,” playing with emotions is tricky[1]. At a turn, it looks like Russell Westbrook punching through a brick wall of defenders at light speed, a grass-fed Novak Djokovic urging the crowd to get behind him or Mark Messier shouldering the weight of a cursed franchise, as well as his own guarantee. It looks like Chris Paul scoring 61 points for his grandfather, or Brett Favre throwing for four touchdowns on Monday Night Football. It also looks like Russian hooligans bringing their country’s soccer team to the edge of disqualification at Euro 2016 over fits of violence with other fans and the police.

In Game 5 of the NBA Finals, we saw two facets of this imponderably massive spectrum. Draymond Green’s inevitable suspension for extracurricular activity gave rise to stellar performances from the four biggest stars in Oracle Arena, as LeBron James, Kyrie Irving, Steph Curry and Klay Thompson dared each other into the best game of the series thus far. Whether this acts as fuel to Cleveland’s fire or simply delays the inevitable made it an altogether more compelling spectacle.

To understand the Finals thus far, it is helpful to start where everything good, objectively informative, balanced and reasonable in 2016 is, Twitter:

I can't remember a finals where so little basketball was being discussed. It's all narrative, legacy outcome, and semantics.

While I was being flippant about the dissemination of information in this day and age, the tweet could not be more accurate. Between the wake of the Thunder, the 73 wins, Kevin Love’s fit, Klay Thompson’s alpha-beta dog status, Steph Curry’s sneakers and pretty much anything relating to LeBron James and the city of Cleveland, fans have had a tendency to lose sight of the fact that actual basketball was being played.

It could largely be because the basketball being played hasn’t been especially good. Through the first four games, the average margin of victory was 22.3 points, including a pair of 30-point blowouts in Games 2 and 3, one for each team. It looked as if, for once, taking to social media to debate LeBron’s place in history was time better spent than actually watching the man play, given the futility of his explosive exertions.

To be fair, Game 5 actually finished with a larger margin of victory for the Cavaliers than Game 4 had for the Warriors – 15 and 11, respectively. But it felt much closer. When the Warriors started to pull away in Game 4, that familiar inevitability crept across the screen, a Dementor come to suck the life out of the most gripping game to that point. When LeBron and Irving finally checked out of Game 5 with 1:52 remaining in the fourth quarter, after posting matching 41-point efforts, 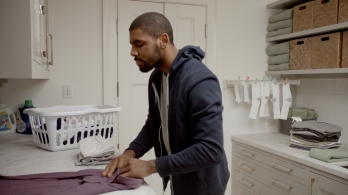 they didn’t bother looking satisfied with what they had done, sporting identical visages of solemnity, knowing it was just a start if only because it has to be.

Cleveland benefited from Green’s suspension – not having to deal with a guy carrying a 13.1-point swing in postseason offensive rating will do that for you[2]. Without Green, there is no Death Lineup, and opponents are allowed to pursue more traditional paths to the basket and defensive schemes in an attempt to shut down the Splash Brothers and Company. Green’s fiery tendencies got the better of him in Game 4[3], and he ended up spending Game 5 nearby at O.co Coliseum, taking in an Oakland Athletics game.

One of the most important aspects of the Warriors under Steve Kerr has been their adaptability. They don’t get injured often – another key – but when they do, Kerr has a way of rearranging the lineups and optimizing role players more than enough to get by, like a well-placed family portrait covering a dent in the wall. To the glancing eye, nothing has changed, and that’s the way it has been for Golden State for most of this season, even through the odd Steph Curry knock or Andre Iguodala rest.

Without Green in Game 5, the Cavs were able to exploit pick-and-roll mismatches, but more than that they made the most out of their opportunities. In short, echoing Irving’s Uncle Drew, the Cavs just hit buckets. For the first time this series, the game was tied at halftime, but it didn’t feel like that amounted to an eventual Warriors victory.

Cleveland responded to Golden State’s unconscionably long threes with madness of its own, Irving and James spearheading an inside-outside attack that saw both players get to the rim, finish with contact and nail jumpers, both open and contested.

Klay Thompson and Steph Curry finished with 62 combined points, with Iguodala posting a 16-6-11 line that acted as a facsimile for Green’s missing production, and it still wasn’t enough. Cleveland probably can’t count on shooting like that again, or on James’ and Tristan Thompson’s combined 31 rebounds, but then, the Cavs were the best three-point shooting team in the playoffs entering this series.

James delivered an all-time performance, Irving finally showed up and Kevin Love’s 2 points on 1-5 shooting was an absolute non-entity. Yes, this was against a great defensive team without its greatest individual defender. No, Cleveland cannot expect production quite like that from its two bastions again. Some combination of JR Smith, Iman Shumpert, Matthew Dellavedova[4], Richard Jefferson and Love is going to have to chip in if the Cavs want to win.

Still, that doesn’t mean the series is over just yet. Curry doesn’t look right, Andrew Bogut just suffered a possibly season-ending knee injury and Green remains on the league’s punishment radar. Defeating these Warriors three games in a row is improbable, but not impossible. A Warriors series victory is likely, but not inevitable. You want inevitability? Go to Twitter and look for egg avatars[5] who are currently bashing LeBron for one of the greatest single-game Finals performances ever against one of the greatest teams ever assembled. Prepare the hashtag cannons. Game 6 awaits.

[1] I mean “playing” here in the literal sports sense, but it can be applicable otherwise, if you’re into that sort of thing.

[2] Offensive rating measures points per 100 possessions, and this is an extension of that which measures his O-rating on the court as compared to the Warriors’ team rating when he sits; in the regular season, Green’s on-off O-rating was +25.6.

[3] Whether or not he was deserving of the suspension for that particular offense is…questionable, to say the least, but Draymond’s had it coming for his loose-limbed approach to basketball. And anyway, the insult he used on LeBron is weak and lacks the kind of creativity for which the Warriors, and Green in particular, have come to be known.

[4] Zero points on 0-2 shooting with three fouls and two turnovers in three minutes of play in Game 5; thanks for showing up, Delly.