The focus on the recent success of the regular season is understandable given how much information everyone now consumes on a daily basis. Honestly, it has been so long since we last saw Steph nonchalantly go 5-9 from beyond the arc and sit down on the bench looking a bit bored of it all that I almost miss the sight of his absent-minded mouthguard chewing. Almost. That part is still weird as hell.

Still, there could be another reason, besides their point guard’s absence, that the Warriors are a borderline afterthought. It could be the fact that, now, nearly every other team attempts to play the same style of basketball that they perfected.

Golden State did not start the three-point revolution, but the way in which they dominated the league and shattered previous three point field goal records during the 2015-16 season was a clear tipping point for NBA strategy. Just take a look how much more often teams shoot a large volume of three-point attempts per game in the playoffs compared to the ancient times of 2010 and 2011[2]:

The 2018 playoffs are still quite young, but as of this writing, every team has shot at least 20 three pointers in 14 out of 16 games[3]. The league appears to have fully transformed.

This change is, without a doubt, a net positive for the NBA. Most fans prefer higher scoring affairs to defensive struggles, which are often described as ugly and sloppy contest, and the three-point revolution has certainly delivered the offensive goods:

If someone said they preferred the style of, say, the 2004 Detroit Pistons, they would immediately be called out for trolling. That Pistons team defeated their playoff opponents by an average score of 87-81 in ’04, which now sounds like the score of an exciting college game that went to overtime.

These trends make the narrative of a closing gap between the NBA’s higher and lower playoff seeds seem enticing. If scoring is up all around and it’s mostly due to increased prioritizing of open three point attempts, then surely every team is more vulnerable to losing every night? The problem for the underdogs is the playoff format. A best-of-seven series favors the more talented team, and if jump shooting is more important to team offense than ever before, then it makes sense to pick the better jump shooting team to win a series.

One of the most famous NBA clichés states “it’s a make or miss league,” and the numbers show that the offensive sea change has only strengthened the resonance of that trite saying: 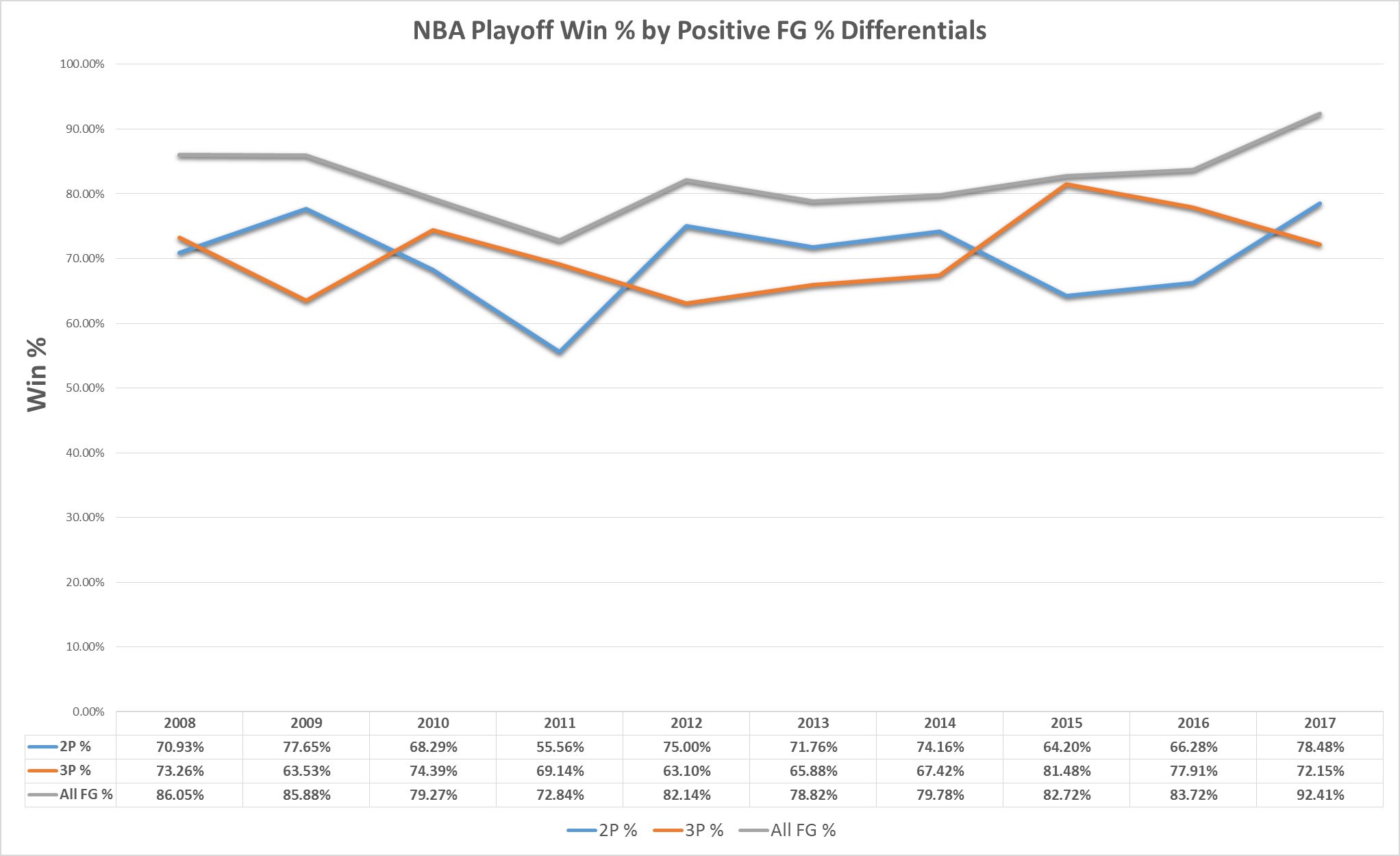 The NBA has always needed more parity, so the current sentiment that the playoffs are more wide open than ever feels refreshing. On one hand, there are more up-and-coming teams, they all play smarter basketball than the lower seeds of years’ past, and the rising television ratings clearly show that young stars and fresh storylines drive up interest in the game. On the other hand, maybe none of those narratives matter. Maybe, this entire postseason still will come down to which team sinks the long ball at a greater rate than their opponents. If that is the case, I find it hard to bet against the team with the best shooter of all time[5].

[1]As a Sixers fan, it should feel great at this point that Embiid can be mentioned in this opening paragraph at all without anyone writing me off as a total homer, but I know I’m far from the only fan in Philadelphia hungry for more success after the recent run of good fortune.

[2] All statistics related to the graphs above were calculated with data pulled from basketball-reference.com

[3] The exceptions were the Milwaukee Bucks in Game 2 vs. Boston, who looked lost whenever Giannis Antetokounmpo was unable to make an acrobatic layup, and the Timberwolves, who lost by 20 points in Game 2 of their series to a Rockets team that attempted 52 three pointers.

[4] Based on data from the Elias Sports Bureau.