Welcome to TV Party, a weekly segment where we preview  five of the week’s most exciting match-ups in college football so you know when to grab some beer and ignore the outside world.

This week: After a few weeks of an embarrassment of riches, this week is shaping up to just be another embarrassment. Embarrassments are some of the most terrifying situations for some people, including yours truly. That works out great for this week’s lead up to Halloween. So, to preview this week’s slate, I am going to run five games with my very own Horror Index, which is based on some of the most embarrassing moments of my life. SPOOKY SCAAAARRY!

GAME 1: WEST VIRGINIA @ TCU: HORROR LEVEL – LOCKING YOUR KEYS INSIDE OF YOUR HOUSE WITHOUT A SPARE

Locking your keys inside of your house sucks especially when you don’t have a spare. You’ve got to call on other people to help you and inconvenience them. All the while you have to wait around until you are let back in so you can get back to whatever it is that you were doing. I’ve done this before and I’ve done it while I was on my lunch break from work. Luckily, my girlfriend who is awesome and generous and kind left work to come take me back to the office. I say all of that to say that TCU and West Virginia is going to inconvenience you in some manner because its on FOX. But, it could be worse. You could be locked inside of a house that’s on fire (Oregon-Arizona State).

Kickoff from Fort Worth begins at 7:30 PM on FOX Sports 1 on Thursday night.

Parents are adapting to social media with varying degrees of success. Some are really adept at it; others post Minion memes to project their inner thoughts to a world, wide web of differing opinions. A lot of parents LOVE Throwback Thursday though. This is their time to embarrass and make you regret any stylistic decision you ever made. Like, this picture for example: 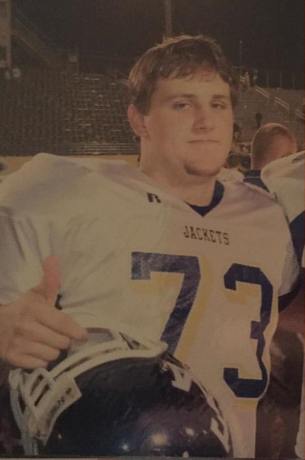 This is a picture of me with facial hair that I only let grow out of one of the most unacceptable place possible: my chin. Look at it! I look like the front man for a Creed tribute band. I really look like I want to be with Scott Stapp or that sad sack in the Blue October video. Why would anyone let me do this to myself? Of course, my dad posted this to both Instagram and Facebook reminding the world that I did this to myself.

These pictures have a way of making you question why you did the things that you did in your younger, formative years. Watching North Carolina and Pitt play will make you do the same when Pitt holds the Tar Heels for all of 100 yards.

ESPN’s broadcast from Heinz Field starts at 7:00 PM on Thursday.

Sometimes parents’ preferred method of learning is trial-by-fire. For my parents, this was always the preferred method. The most demonstrative example of this was in 7th grade when I thought I was the next hoop star after only playing a few pick-up games at my community pool. After reading two pages of a book my mom gave me about the fundamentals of basketball, I decided to try out for the 7th grade team.

Now, let me be clear about this, I had no skill at all. My dribbling was terrible, my jump shot was a mess, and my defense was just  me launching my body into people. The confidence in my game was driven by friends who just weren’t that honest with me. They enabled me and told me I had a shot. This spurred me to try out for the team with all of the confidence of a kid who just learned he’s on the Jumbotron at an NBA game.

I didn’t know at that age that my confidence turned into arrogance. How arrogant was I? I decided to wear jean shorts to basketball practice. My mom even asked, “are you wearing those to try-outs?” I responded with a caps lock “YES” as if I had the key to the universe in the palm of my hand. As a result, I showed up to basketball try-outs as a Florida Gator fan with all of the coaches eye rolling as soon as I arrived. I could feel everyone’s eyes staring at me but no one said anything to me directly. I just got asked if I needed to borrow anyone else’s shorts.

Ole Miss and Auburn are two teams who were enabled by blind confidence but are now standing in the middle of a seventh grade gym wondering why they never made the cut.

The Rebels wander into a  Auburn confidently at 12:00 PM on ESPN on Halloween.

My sophomore year of high school started off with a real bang. I was deathly intimidated by my high school football coaches, the worst of which were channeling their aggression from teaching Home Room 101 onto the football field. My fear manifested itself onto a permanent zipper on my lip until my sophomore year of high school when my bladder was in need of relief. I decided not to ask any of my coaches if I could my relieve myself in fear that I would have to run extra laps around the field because I was taking time away from drills.

The result of holding it in for damn near thirty minutes was a feeling I will never be able to shake. I just let it go for all of the world to see. I saw some of these same sadistic coaches laughing at me from thirty yards away as I tried to hide behind my teammates. I relieved myself on the field to great embarrassment, but I’d like to think that I got over my fear of my high school football coaches at that point. Once you piss yourself in front of them, there’s not much more you can do to embarrass yourself. And really, what’s more embarrassing? Pissing yourself or scaring the hell out of minors so you can have more confidence about teaching Home Room 101.

Clemson might piss their pants against NC State but they’ll be able to laugh it off if they do with their Top 10 defense in the S&P+ rating.

The Tigers kick off against NC State at 3:30 on ABC.

Man, I was really one of the most confident kids in middle school because I don’t know what possessed me to do some of the things that I now regret. Another one of them was performing Smash Mouth’s “All Star” in front of a panel of judges, one of which was my chorus teacher who definitely guffawed outright. I LOVED Smash Mouth when I was in 7th grade and I wanted the dog-eat-dog world of middle school to know that I knew every word of their seminal 1999 album, Astro Lounge.

I performed my ass off and swayed with all of the gusto of Guy Fieri after eating Sweaty Bacon Burger Brownies. It was equal parts embarrassing, awesome and gloriously unaware. I never got the talent show gig after I saw the whole panel laugh after I left the room. But, I can fondly look back on it and say it’s one of the coolest, most regrettable things I have ever done. It’s one of those things that makes you wish you could go back in time so you can catch the spirit of you without doing the thing that you actually did. I would love to have that much confidence buuuuuut I also want to take back my taste in music.

Notre Dame is facing an undefeated Temple team and if they beat them handily, it will be something that they will regret. But, if Temple plays them close, they will look back on it fondly and say how great the Owls were despite the fact that they are of “lesser conference.”

The Fighting Irish travel to the City of Brotherly Love for a primetime game against Temple at 8:00 PM on ABC.