It’s almost the middle of September, which means it’s almost October, which means it’s almost time for basketball season. With the NFL stumbling over itself at every turn – which, come to think of it, is how most of its current players will spend their autumn years, in their mid-40s – and baseball casually winding toward the postseason (we see you, Mets), basketball still stakes a claim in some part of the sports conversation, even if you aren’t watching EuroBasket games in the middle of your afternoon (On Wednesday, Italy mounted a comeback to force overtime and beat Germany, 89-82). Tuesday’s announcement that NBA division winners are no longer guaranteed playoff spots kick-started much of the hibernating excitement which will roll us into the upcoming season.

With basketball season breathing down our necks, it’s time to start considering how some of the pieces of Adam Silver’s puzzle will fit, how they will interact with one another and how they can realize their potential. One of the most interesting teams for this basketball season has long been a laughingstock, even with a generational talent who may very well be the best pure center in the NBA. Now, that team has two potential game-changing centers, as well as a hodgepodge of players who either grew out of previous roles or never quite fit into them in the first place. The Sacramento Kings aren’t good, yet, but they could be, and they’re seemingly better; they aren’t stable, yet, but they were for a brief time last year; and they aren’t a favorite, which may end up making them one of the most dangerous teams in the league.

Let’s go back to mid-December 2014. Things were looking better in Sacramento than they had at any time previously in the DeMarcus Cousins era. Mike Malone had led the Kings to a 9-5 record, and though they regressed a bit during a nine-game stretch without Cousins, there was reason for optimism. Cousins seemed to like Malone, and when you find a coach that DeMarcus Cousins likes, you try your damnedest to hold onto him.

That is, unless you’re Vivek Ranadive, business maven and owner of the Sacramento Kings. Ranadive was not impressed with Malone and, in one of the more hilariously shocking coaching decisions in recent memory, decided to remove him from his post. It seemed that Malone’s rejection of Ranadive’s proposed 4-on-5 defensive scheme hammered the nails into his own coffin.

If you clicked to read more because you even tangentially care about the Sacramento Kings in mid-September, you probably know the rest: After beginning 9-8 over the first two months of the season, the Kings collected only twenty more victories the rest of the way, including only six road victories, while stumbling to the third-worst record in the Western Conference, in front of only the newly Love-less Minnesota Timberwolves and the Kobe dumpster fire that were the Lakers.

Malone’s interim replacement, a hapless Ty Corbin, gave way to George Karl in February. Karl, the 2013 NBA Coach of the Year with Denver (Side note: Remember Iggy as a Nugget? Seems like a decade ago now), directed his lucid nightmare squad to an 11-19 record over the final thirty games, earning seemingly none of Cousins’ respect. That bled into this offseason, as reports of either a Karl firing or Cousins trade seemed to permeate each day leading up to the draft.

Of course, neither of these things has happened (yet), and the Kings began retooling under the assumption that Karl and Cousins would coexist. Sacramento parted ways with several notable players, including the franchise’s all-time leader in games played, Jason Thompson, as well as Carl Landry, Ray McCallum, Jr. and, unfortunately, chili pepper condiment maven Sauce Castillo. In an attempt to – I guess – maximize Boogie Cousins’ skill set, Sacramento brought in several players, including drafting Willie Trill Cauley-Stein. 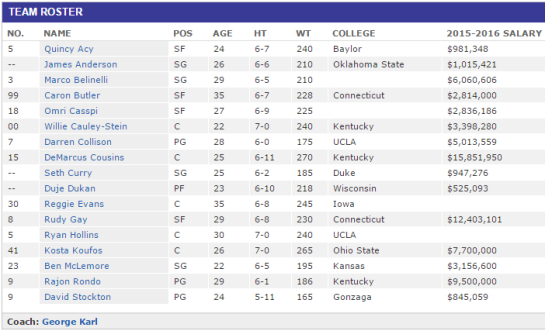 Alright, so what we seem to have here is a collection of, if not necessarily “spare parts,” then definitely the in-app additions that you buy in order to level up on an otherwise completely meaningless game. A lot of these guys are Temple Run coins. What follows is my knee-jerk reaction to what I see:

Omri Casspi is absolutely tearing up EuroBasket for Israel right now, averaging almost 20 points, 6 rebound and 3 assists per game, but what I’ll remember him for is that he adjusted Boogie’s headband in perhaps the most courageous Vine ever:

There are so many possibilities for this team. Realistically, we can count on Boogie putting up an excellent age-25 season, assuming health. Outside of that, there are maybe more variables in this roster than with any other in the league. How Rajon Rondo fits in will be especially interesting. Rondo has always liked, or at least tolerated, guys he respects, and both he and Karl will have to work toward gaining each other’s respect. On a one-year, $9.5 million deal, Rondo bet on himself following the worst season of his career and two years after the injury which seems to have derailed him permanently. Rondo is still only 29, however, and being a pass-first guard in a league full of increasingly confident, skilled shooters is still an asset.

How much of the floor Boogie and Bill Trill see together could shed light on the future of the franchise. Cauley-Stein is a tremendous defender and rim protector who would seem to be able to play foil to Cousins’ offensive strengths. RealGM points to Cauley-Stein as Cousins’ backup, while starting Quincy Acy at the 4, but playing both together would just be an incredible thing to watch. Likewise, playing Darren Collison at the 2 while starting Rondo at the point could optimize the starting five.

But then, of course, who really knows? Not Vivek Ranadive, and certainly not I. It could just as easily be that we’re looking at an entirely different roster twelve months from now, one without DeMarcus Cousins, McLemore or Rondo. In a word, a much more boring (and probably worse) team. They are the early favorites for #LeaguePass watch. A healthy Cousins in the middle is the key to the whole operation, and it might be the only thing George Karl can count on right now. At least for the foreseeable moment, putting the rest of the pieces together is up to him.