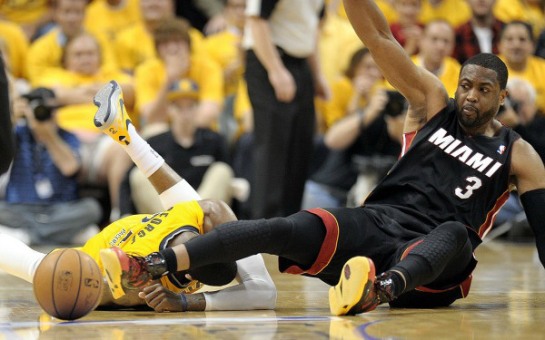 Paul George, the do-everything swingman whose up-and-down season has mirrored the fortunes of his Indiana Pacers team, suffered a concussion in Game 2 against the Miami Heat. Early pessimists pinned him as missing the rest of the series, but now it appears as though he will be ready to play Game 3 on Saturday night in Miami. Elsewhere, Serge Ibaka is facing a similar situation, and his return couldn’t come soon enough for the Oklahoma City Thunder, who face an 0-2 deficit to the all-conquering San Antonio machine. Also, Cleveland wins the draft lottery for the third time in the last four years, prompting questions of faith and critical reason in the city by the lake.

1. Paul George suffers a concussion in Game 2, plays Game 3: Paul George was supposed to be the yang to a few yings. First, he would complement Roy Hibbert’s defensive presence in the paint with offensive wizardry which would carry the Pacers’ subpar scoring. Also, he was the practical answer to LeBron James, a two-way master who could take over games and generate necessary fastbreak opportunities for his team to succeed. For the first half of the season, this is exactly what George was, and he carved himself a legitimate spot in the MVP conversation for a while. The second half brought one of the greatest offensive lulls in league history to a team which took advantage of one of the worst seasons by any conference overall and landed the one seed. Indiana followed this up by almost getting bounced in the first round, with George’s and Hibbert’s woes shouldering most of the load. The Pacers stumbled their way into the Eastern Conference Finals, won Game 1, and everything seemed to be going the way many thought it would. Finally, they said, LeBron’s dominance was facing a worthwhile challenge that didn’t come in the form of a 7-foot German and a bunch of spare parts (Thanks again, Dirk, for one of the best Finals runs ever). In Game 2, George took a knee to the back of the head from Dwyane Wade, everybody’s new favorite polarizing figure, suffering a concussion along the way. Time off allowed for his passing of various league benchmarks, and George was cleared. He played Game 3, leading the Pacers with 17 points, but his team again fell short, digging themselves a 2-1 series deficit to the mighty Miami ON/OFF switch. As has been the case all season, Indiana’s fortunes live and die with Paul George, even as Lance Stephenson’s insanity lingers.

2. Serge Ibaka strains his calf, leading directly to an 0-2 deficit for his Thunder: Serge Ibaka was the key guy in the James Harden trade. We knew this. The thought process behind it consisted of an oft-accepted theory: two wings and one big was better than three wings, even if the three wings are all capable of scoring upwards of thirty on any given night. Ibaka’s shot-blocking ability, along with the matchup problems he creates in being able to shoot jumpers, gave OKC reason to believe. As we saw with Russell Westbrook’s injury a year ago, however, the best-laid plans of mice and men do often go awry. Ibaka was slated to be the guy who would disrupt San Antonio’s machinations. He went down in the last round with a calf injury, and the Thunder became nothing more than a muted rumble far off in the distance. In this case, as in so many others, Ibaka is a game-changing player, and his unique skillset is mandatory, it seems, for OKC to even consider the possibility of victory. He says he’ll play in Game 3 (it is entirely up to him, apparently), and his impact could change the course of at least a game or two, if not the entire Western Conference Finals.

3. Cleveland wins the draft lottery for the third time in four years, adding necessary spice to the “God Hates Cleveland” narrative: Kyrie Irving, Dion Waiters and Anthony Bennett. It seems that Cleveland still can’t figure out a way to rebound from The Decision without first imploding. The Cavaliers won the draft lottery again, which will almost certainly, depending on whom you believe, lead to Joel Embiid’s arrival in the Buckeye State. Will Embiid finally be the Hobbes to Irving’s Calvin? And what of Waiters? Do we see a draft-night trade sending the guard to God knows where (Minnesota, Chicago, the Lakers)? Every report you read says Irving and Waiters cannot coexist, though Irving himself claims those are falsehoods. But that’s all secondary now. What stands at the forefront is whether, against all odds, Cleveland can shoot and miss in a can’t-possibly-under-any-circumstances-miss year with what really might be the most loaded draft class thus far this century. If it’s anyone, it is the Cavs.