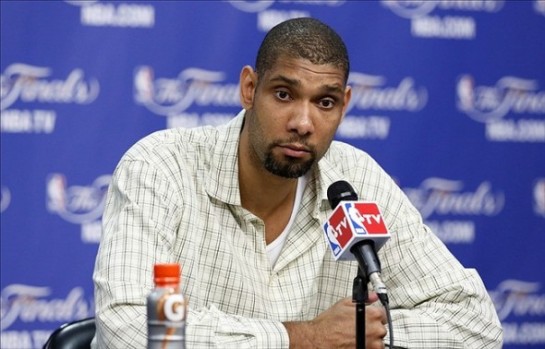 “Excellence is not an act but a habit.” – Aristotle

No player in the NBA has been as consistently great over the last fifteen years as Tim Duncan. The Big Fundamental has come to embody the difference between excellence and success as well as the parallels between them, as he has achieved both. Even through his 30s, Duncan has played at a high level, delivering double-doubles and smart defense at every turn. What may be even more impressive, however, is Duncan’s demeanor as a bastion of calmness and understated brilliance, both on and off the court. He is the anti-#LETWESTBROOKBEWESTBROOK. In an era of increasingly ridiculous and individualistic postgame attire and behavior, the Spurs are the iconoclast professionals who simply show up and do their jobs at an alarmingly efficient rate. Duncan has become a hero to those who value utility and grace under pressure, perhaps unwittingly setting the league’s standard for professional basketball normcore as a fashion non-statement.

By now, depending on your cultural temperament, you may have heard the term “normcore” as describing a style which is either ironically bland or earnestly a way of standing out by fitting in (albeit to an idealized version of dad-brand ’90s attire), or something like that. Sean Monahan, of the New York-based “trend forecasting” group K-HOLE, describes normcore as “a desire to be blank. Fundamentally, the way that we thought about it at K-HOLE is that people used to be born into communities and were, sort of, thrust into the world and had to find their own individuality. And I think today, people are born individuals and are trying to find their communities.”

That quote could just as easily apply to the state of basketball in the post-Michael Jordan era. Since the rise of His Airness, players have taken to carving out their individual identities in the form of $90 million shoe contracts out of high school and one-and-done collegiate careers. Much to the chagrin of the league and old-school basketball minds, players have put an “I” in team, often spurning the greater good for personal gain. Loyalty is as antiquated as MS-DOS; the Russell-era Celtics are so black-and-white television. This year’s model is in technicolor, and it is going to whomever bids highest, your city and its fans be damned.

Tim Duncan is all about “this guy, amirite?”

Enter the San Antonio Spurs, who are currently cutting their way through an Ibaka-less Oklahoma City Thunder. A team so criminally underrated that it may, in fact, be properly or even overrated, the Spurs are a machine which relies on technical proficiency, shrewd coaching and teamwork. Each player has to be utilitarian is some respect, giving way to the strengths and covering for the weaknesses of everyone else. Over the last decade and a half, no team in North American sports has been as consistently great as San Antonio’s basketball franchise, and a lion’s share of the credit in that run belongs to Tim Duncan.

You’ll be hard-pressed to find any reasonably knowledgeable basketball mind who does not respect Tim Duncan. His work ethic is renowned, and he defers to his teammates in such a way that it makes them all better. Duncan sets high picks and plays effective defense. He is a huge reason why the NBA had to switch its All-Star slots from forward-forward-center to a three general forward look. He played center for years, when he was always listed as playing power forward. We all knew. He is the straw that stirs San Antonio’s drink, which in this case is probably seltzer water with a lemon twist.

For all his continued excellence into the autumn years of his career, Duncan has maintained an element of what a lot of people in and around sports, perhaps unfairly, deem “class.” Rarely does he celebrate outwardly, maintaining his professionalism and the general sense that this is his job, and, you know, he’s just trying to get it done and go home so he can watch DVR’d episodes of The Big Bang Theory.

Tim Duncan is the NBA’s normcore hero on its most normcore team. A four-year college graduate (he has a degree in psychology from Wake Forest while simultaneously earning the nickname “Mr. Spock” from opposing fans, apparently), he is the ideal baton-carrier from the team-oriented yesteryear to the me-oriented now. Tim Duncan is so average that he got ejected for laughing. LAUGHING! He isn’t any fun because the man won’t let him. No wonder he always looks like Shaq stole his lunch money in 2002.

A quick search of “Tim Duncan normal” yielded the following results, many of which are entirely unsurprising when you take Duncan out of his NBA context. That’s just the thing though: you can’t take Tim Duncan away from the context of professional basketball. It would be unfair to us, the fans, as well as to his teammates and the other players. Nevertheless, Tim Duncan is here to remind us that professional basketball players are normal human beings. In some cases, they are exceedingly normal.

Here, dual blackjacks. Tim Duncan sits as the notoriously bombastic Kevin Garnett screams into his ear. Duncan is unruffled. This picture is actually a proper categorization of the mid-00s Western Conference. 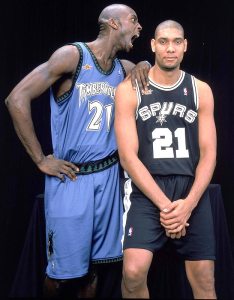 The duality of man

Tim Duncan and Shamu have a wonderful rapport. Yes, Duncan has seen Blackfish at the behest of trendy friends, and yes, he will look into it after the season.

Even his video game caricature carries an air of detachment.

The best TMZ could do for the Spurs? Catch them in a sort of off-duty Men In Black phase following a playoff loss. 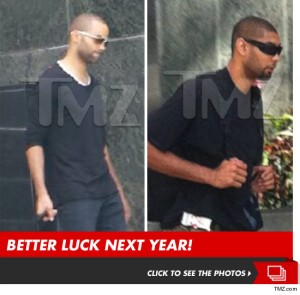 Some paparazzi thought this mattered.

You can take a look under the hood. Coach said it was alright.

And yet, when things go according to plan, it’s difficult not to appreciate the beauty of a well-executed Spurs gameplan. Tim Duncan loves that more than anything.

When Tim Duncan laughs, the whole word laughs with him.