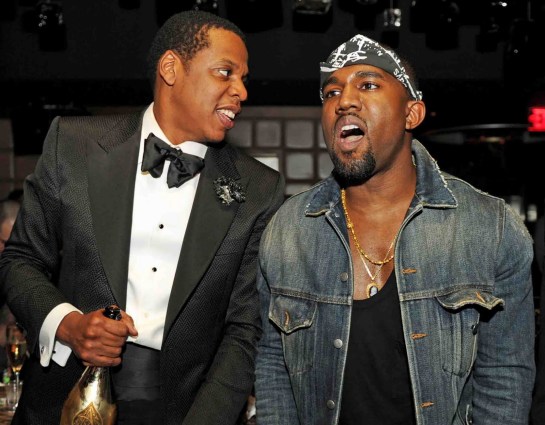 As the summer winds down, we on staff here at Tuesdays with Horry have taken it upon ourselves to answer perhaps the two most important questions in the recent collective conscience of these United States:
1) What was your favorite moment or thing from the summer of 2013?
2) What was your general reaction to the VMAs?
Rory Masterson
For me, the dialectic between the releases of Magna Carta Holy Grail and YEEZUS was especially captivating. It never turned into a Blur/Oasis kind of battle for musical supremacy because that isn’t the relationship Jay-Z and Kanye West share. Instead, they acknowledge their shared status as royalty at the forefront of hip-hop and American pop culture in general. That two albums can be released so closely together without bleeding into each other or one stepping on the other’s toes is somewhat remarkable in the digital age, especially given how closely these two have worked in recent years. Instead, these co-titans simply released albums, one accompanied by an almost gratuitous marketing campaign and the other accompanied by a substantially lower-profile, but perhaps just as effective, guerrilla initiative and almost-bare minimum packaging.
Also, we should make note that this is the summer of Pharrell, and no one can stop him.
As for the VMAs, that One Direction won “Best Song of the Summer” for “Best Song Ever” is a joke because it a) isn’t the best song ever by most reasonable standards, and b) wasn’t even in contention. I mean…come on, Internet. Get it together. That’s just felonious. Over Daft Punk? Robin Thicke? Pleezus.

Summer 2013 Summer of Amanda Bynes Until She Got 5150’d Or Whatever. Lived for her tweets for months, especially those about Drake/only caring about the opinion of hot people/her nose job. Also, the Bravo series Princesses of Long Island gave me life this summer. Also, SharkNado, although I have yet to see the movie in full, so I feel like a bit of a fraud saying that.
ALL THE THINGS to say about the VMAs, most important being that I’m pretty sure I pulled a muscle flailing in excitement during JT’s medley. I know everyone was WTFing in regards to Miley but also like, we all saw that video right? It was pretty much that, just live. Also, why does every producer in the world think we care so much about how Taylor Swift reacts to awards and performances? Like, cut to her a few times, and that’s fine, but this was legit like the Grammys all over again. (Maybe I’m just annoyed at her for throwing so much shade at my boyfriends in 1D tonight so.)
Justin Timberlake is a legend, that’s pretty obvious. His medley was like amazing, BUT I feel like the NSYNC reunion was a lot of hype for pretty much nothing. Not that I’m not obsessed with it and watching it literally every minute of every hour, but we didn’t even get a full rendition of “Bye Bye Bye.” Feeling kind of gypped because I was looking forward to “Tearin’ Up My Heart,” “It’s Gonna Be Me,” “This I Promise You,” “Digital Get Down,” “Friday Night,” “Pop,” etc. But lolz at JC for his little riff after the song ended. Sorry, JC, but the guy who sang “Some Girls Dance With Women” is not about to upstage JT, no matter how much we were all looking forward to that reunion.

Tweens have clearly taken ahold of MTV and are steering the ship. That much is evident when people like Austin Mahone and One Direction are winning awards over artists that were much more ubiquitous and talked about. I know who Iggy Azalea and The Weeknd are, but Austin Mahone, Adriana Grande? What? They seem like manufactured robots.
It’s clear that the tweens who are making endless SMACKCAM Vine videos and pissing off Wal-Mart employees are the same ones who are trolling the hype machine of the VMA Awards that tried WAYYYYY too hard to seem hip. For example, the VMAs were in Brooklyn this year and there were references everywhere that reinforced that fact. FIXEY BIKES! HASIDIC JEWS! BROOKLYN BRIDGE! BIGGIE FREESTYLES! LIL’ KIM! It seemed like a desperate attempt to grab the attention of those in their 20s so Viacom could say, “look we know what’s going on!”. What we got instead was a poorly-produced show where Jimmy Fallon looked as unfunny and uncool as he’s ever been, and boy bands were the gel that kept the whole thing from falling off the rails. Unenthusiasm was everywhere, from Sway attempting to act excited about Pharrell on bicycles (BICYCLES! BROOKLYN!) to Drake staring off into space (both on stage and off).
This was the place where Fiona Apple told us to “screw the machine,” where machine rager Tim C. climbed on a metal set piece to steal Limp Bizkit’s moment, where Britney kissed Madonna who kissed Christina, where Kanye halted Taylor Swift, and Courtney Love met Madonna. These were great moments in pop culture. Instead, we get Macklemore screaming “they let independent artists in at the VMAs” when Tyler, the Creator received Best New Artist back in 2011 as an independent. It’s an award show that is desperately grasping at straws to be the makers and breakers of new artists when, in reality, the new and interesting artists are invited guests who provide the most relevant commentary via Twitter (we see you, Flying Lotus).
If we’re going by a rating system, I give it a C.
Sorry for the rant.
HATE HATE HATE HATE HATE HATE
Tyler Lauletta
1) My favorite moment of the summer was the moment I found out Yeezus had leaked. I had been following “@HasYeezusLeaked” on Twitter for about 3 days, and they didn’t even know that it had leaked when I found out from another corner of the Internet. I felt like I was “in the know,” but more importantly, I was excited about just having another album. Kanye West is my favorite recording artist. There are only a few more times in my life where I will get to listen to another great Kanye West album for the first time. Nothing can beat that feeling. I remember where I was the first time I listened to each of his past 4 albums – who I was with, what we were doing.
2) Daft Punk not showing up. WHAT THE HELL. What happened? Did they bail? Are we supposed to think that a minute-long teaser trailer for the video to “Lose Yourself To Dance” constitutes an actual performance? Because it doesn’t. And after all of that Colbchella business? I needed to see a pyramid and a call back to their performance with Kanye in 2008 at the Grammys. Instead, they just bailed.
Daft Punk, if you’re reading this, please just go on tour. The world needs it.
Laura Chamberlain

The best moment of the summer was when The New Yorker celebrated the Supreme Court’s decision on DOMA with Bert and Ernie’s “Moment of Joy” on the cover. The cover is beautiful, provocative, and delivers a clear message without using words. It gives me goose bumps every time I see it. The part I love the most, though, is that the artist (Jack Hunter) originally submitted the cover, unsolicited, through Tumblr. And it became the cover of The New Yorker. How cool.

I didn’t watch the VMAs, but I am genuinely surprised by the media coverage of Miley Cyrus twerking. We care? We really care that much? Howard Dean weighed in.

Really? REALLY? Not to be this person, but we’re about to attack Syria, Howard Dean. Some comments on that would be appreciated.