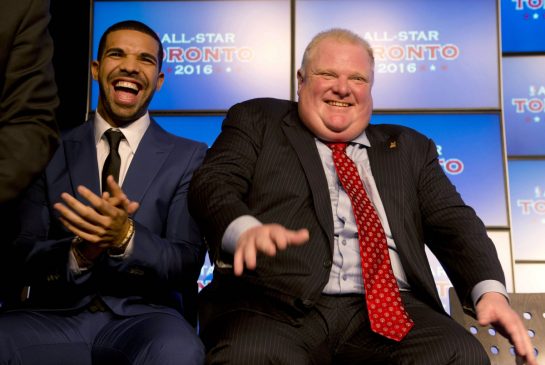 2013 brought many strange occurrences and changes. From the triumphant, like Jason Collins’ admission of homosexuality, to the tragic, like the Boston Marathon bombings, to the downright necessary, like Pope Francis and the charge toward universal acceptance. Toronto got some run, with Drake and Mayor Rob Ford (pictured above) giving the Ontarian capital a few things to consider aside from the Maple Leafs’ collapse and a distinct lack of Chris Bosh in recent years. It also brought a website, born of a hellish New York morning and a few text and Facebook messages, which, we hope, you have enjoyed thus far. Now, several of us discuss 2013 in its many forms. How could 2014 ever follow this performance?

END_OF_DOCUMENT_TOKEN_TO_BE_REPLACED

As the summer winds down, we on staff here at Tuesdays with Horry have taken it upon ourselves to answer perhaps the two most important questions in the recent collective conscience of these United States:
1) What was your favorite moment or thing from the summer of 2013?
2) What was your general reaction to the VMAs?
END_OF_DOCUMENT_TOKEN_TO_BE_REPLACED

A lot has changed for Jay-Z since 2011’s Watch the Throne, which serves as social commentary from the top wrapped in a luxury item inventory. His empire has grown tentacles, his influence growing almost on a daily basis. The Brooklyn Nets opened their home at the Barclays Center. Then, he sold his share of the team so he could represent athletes with Roc Nation. Even Magna Carta Holy Grail is a record that is more business than personal. The marketing scheme surrounding the album was based on an app which only Samsung Galaxy owners could download on Independence Day – all others had to wait until July 9th. This is Jay-Z cementing his brand while increasing his bottom line. But, all is not golden at the top of the world.