“You know you want to write something about Lou HOLTZSCH,” this was a text I received from my editor and co-founder of TwH, Rory Masterson. It was on Monday morning, a day after the announcement that the erstwhile head coach and longtime college football analyst, Lou Holtz, was officially retiring. And yes, I’d like to write something.

END_OF_DOCUMENT_TOKEN_TO_BE_REPLACED

Time. That’s the only thing that was in the US Men’s National Team’s favor when facing Group G. The USMNT was given the ‘Group of Death’ with three titanic opponents that would crush any hopes the US had for, at the most, making it to the semi-finals. There was the unconquerable Ghana and the soccer stardom of one of the world’s best in Cristiano Ronaldo and, by proxy, Portugal. Then, there was the polished, mechanical, engineered-to-kill creation known as Germany. It was only a matter of months before all three would send the US packing back to a place where the MLS failed to attract a million viewers for its championship game. American ‘soccer’ has no place here, they seemed to mock. The United States was given 270 minutes before the vultures would come to pick the remains.

END_OF_DOCUMENT_TOKEN_TO_BE_REPLACED 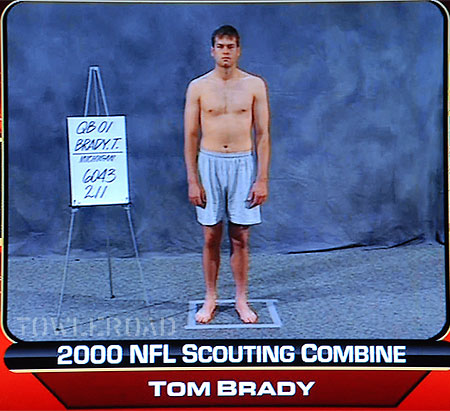 Looking for a way to definitely guarantee that you’ll enjoy the NFL Draft tonight? You’re going to need some alcohol. Please be over 21, though.

The NFL really has us wrapped around its finger. They make puny settlements with former players (while never admitting that football is, you know, dangerous). They take away any and all instances of players having fun. They treat the cheerleaders like second class citizens. They push the date of the draft back, and are even thinking about making the draft last longer. But hey, it’s not like anyone is going to stop being an NFL fan because of THAT STUFF, right?

Truth be told, the draft itself is awful. None. Of. This. Means. Anything. Yet. Don’t kid yourself—-you have no idea how any of these players are going to pan out. So why not have some real fun tonight?

END_OF_DOCUMENT_TOKEN_TO_BE_REPLACED 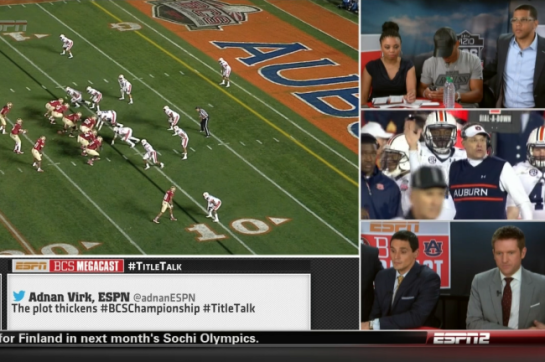 The BCS National Championship Game, the final computer- and poll-generated practice in automated futility before the FBS’s playoff system comes to fruition next season, played out last night in operatic, storybook fashion. Heisman Trophy winner Jameis Winston, Florida State’s redshirt freshman quarterback, led an 80-yard, 58-second final drive which concluded in a two-yard touchdown pass to Kelvin Benjamin, sealing an 18-point comeback victory on Winston’s twentieth birthday. The SEC’s seven-year run of preeminence in college football came to a close, at least for the moment, and a valiant performance from Auburn will surely be lost to the annals of time. No one ever remembers who finished second.

While all of that is well and good, including the 100-yard Kermit Whitfield kickoff return which brought the Seminoles back to within striking distance late in the fourth quarter, the real story happened on ESPN2: the BCS Title Talk portion of ESPN’s BCS MegaCast, an all-eyes-on-us cavalcade of programming which included the game itself, analysis from college coaches and, of course, Title Talk. Jemele Hill and Michael Smith co-hosted a quasi-ESPN office party complete with appearances from country singer Taylor Hicks, actress Cheryl Hines, SEC Network poster boy Tim Tebow and Texas A&M renegade Johnny “Football” Manziel. For the first quarter of the game, Rece Davis and Jesse Palmer seemed entirely uninterested in being there, carrying on side conversations between themselves. Smith spent most of the game attempting to hand out sliders and other finger foods, creating the illusion of a jovial atmosphere. In typical conglomerate fashion, ESPN attached the hashtag #TitleTalk to the program and to the game in general, which elicited a wide variety of responses from participants and onlookers alike.

END_OF_DOCUMENT_TOKEN_TO_BE_REPLACED 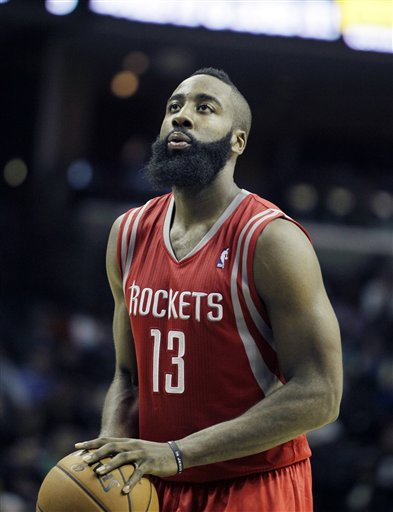 Hope you’ve had a supreme 2013 and that there is more in store for 20-1-4. LeBron is turning 29, having already accomplished enough to merit Hall of Fame induction if he retired tomorrow. What is in store for the King, maybe halfway through his career? Also, James Harden as the theoretical unstoppable force facing an entirely movable object in free throws, and Andrew Bynum is this year’s George Sauer, probably without the journalism aspirations. But you never know with that guy, and that hair.

END_OF_DOCUMENT_TOKEN_TO_BE_REPLACED 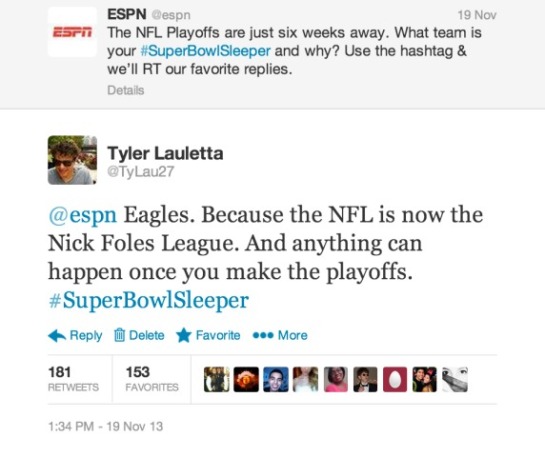 It’s been a big week for me. OutKast is reuniting. The video for “Bound 2” was released. And, as you can see above, I got a retweet from ESPN. It was amazingly exciting, with RTs and favorites pouring into my feed like never before. There were 7.5 million strangers out there in the world following ESPN who could potentially be reading a joke I had carefully groomed to come in at less than 140 characters. I gained 32 new followers and have only lost one of them since. I even got some replies from Giants fans who wanted to yell at me. I decided that I might try to capitalize on this moment of attention, sending one more tweet to ESPN. END_OF_DOCUMENT_TOKEN_TO_BE_REPLACED

Now that the basketball season is a wrap, and with hockey soon to follow, only one of the four major North American seasonal sports, Major League Baseball, will be in session. While the great American pastime certainly carries with it a tradition which is engraved in the hearts of millions, the dog days of summer can get repetitive in the nationally-televised sports world, as diving catches and cannonball home runs take sole possession of center stage on ESPN. By the third instance of a 4-6-3 double play in the SportsCenter Top 10, viewers find themselves rolling their eyes with the reluctantly accepting frustration of Lester Freamon in the pawn shop unit.