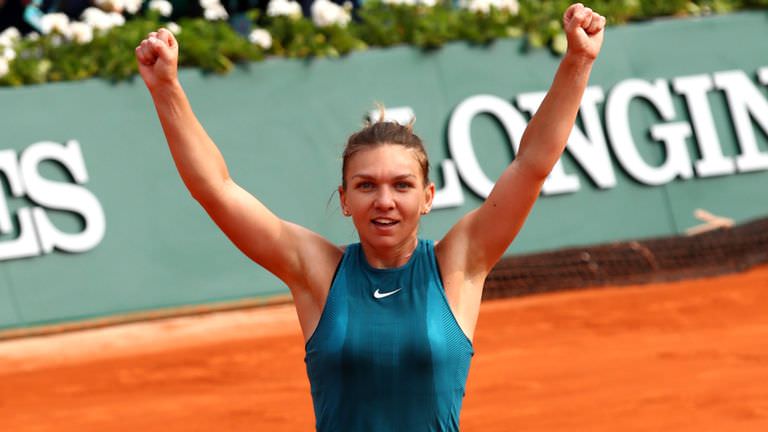 It took four major finals for Simona Halep to break the seal. After last year’s US Open triumph, there was some suspicion that Sloane Stephens could pull out a victory on clay, under the light of the Parisian sun. Even after losing to Halep in 2014 at Roland Garros, Stephens had turned in solid-enough performances in 2015 and ’16, before undergoing foot surgery and missing 2017, to provide an interesting foil.

Still, Halep came into this tournament with arguably the second-biggest target on her back, after newly-anointed mother[2] Serena Williams and, er, narrative-welcomer/dodger Maria Sharapova, and with the biggest chip on her shoulder, having not yet won a major despite playing some of the most incredible tennis across tournaments in recent memory. This was her chance, and she seized it with unrelenting authority.

Halep reached her first Slam final in 2014 at the French Open – coincidentally beating Stephens along the way – before falling to Sharapova in what is the latter’s last major title to date. She reached the final again last year, losing to Jeļena Ostapenko, gifting the Latvian with her first Grand Slam championship while forsaking the world number one ranking.

She reached the top slot following the 2017 China Open, but Halep again stumbled in the Australian Open after firing on all cylinders to the final, where Caroline Wozniacki was able to win her first Slam. If it wasn’t apparent that a commercially-friendly curse hadn’t fallen upon Halep prior this point, by now, it was.

Halep didn’t mind any of that. Following a customary “she’s in trouble” set, Halep asserted herself like a hydraulic press making some light suggestions to a can of shaving cream. Within the span of two sets after dropping a by-now trademark, shaky first, Halep’s forehand went from “Would you mind?” to “Nah, yeah, I’m taking the last pastry, and also fuck your unlisted address.” It was shivery, it was weak; it was sublime, and it was definitive.

Sometimes, maybe a lot of the time, we all stand around waiting for each other to do something. Should we be prodded to action, we can become offended. It would’ve been easy for Simona Halep to become offended at the notions of others, after all she’s been through. She took – I once heard about this in a magazine I borrowed – a road less traveled, and, at 26, finally summited a mountain of her creation as much as of others’. All I can hope is that Halep finally takes a deep breath and exhales, because the expectations get higher from here, even if they aren’t hers alone. She knows this better than most, and I’m willing to bet, now, that she’s ripe to meet the challenge.

It has to be said: the two-year period during which Rafa Nadal did not dominate the French Open now seems, if not quaint, then perhaps understood, if not borderline-generous. “Ah, yes, of course a few compatriots[3] may share in my wealth! Who would I be, were I to turn them down?” Rafa is a generous man from a prosperous family, though he may be the most generous and prosperous of the lot.

On the men’s side, the French Open is a tournament of relatively lengthy reigns[4], from those of Frenchmen André Vacherot, Paul Aymé and Max Decugis[5] to Björn Borg’s six-titles-in-eight-years stay spanning the 1970s and ’80s[6]. Ivan Lendl had his time[7], as did Jim Courier[8], Sergi Bruguera and Gustavo Kuerten[9], all of which makes Rod Laver’s one-year supremacy at Roland Garros, in 1962, as preposterous as Hoboken, NJ native Michael Chang’s victory in 1989 the more preposterous. Between Kuerten and Nadal, there were exceptional outliers; the early aughts are an agreeably weird time for us all.

From 2005 onward, the media has portrayed Nadal as the king of clay, with his play not lagging far behind. Nadal comes across in interviews as unsure of himself, but rest assured: on clay, there is no one, nor has there ever been anyone, better.

What made it interesting was that 23-year-old Dominic Thiem[10], his challenger in the final, had beaten him on clay as recently as, oh, the quarterfinal of the Madrid Open, a common French Open tune-up, this year; Thiem felled Nadal in straight sets, 7-5, 6-3, showing that a new class of outdoor clay court challengers could topple a giant.

But then, well, Nadal remembered that he is what he is, and Thiem is a guy who went and blew his final in that tournament against 21-year-old Alexander Zverev, and that was that. Nadal simply flies through the French Open like a man possessed of frequent flier miles, and how dare you question the authenticity of his boarding pass?

Rafa Nadal is perfect on clay; that’s just how it be, no matter how you do. Nevermind several noticeably absent presences in this tournament. Half a mind says that they knew to withdraw because of Nadal anyway. You know it in your heart.

As it stood, both Halep and Nadal had things to prove. That isn’t say they had equivalent things to gain, of course; Halep was, by the popular vote, unproven, while Nadal was a king whose disinterest, or frailty-via-humanism, could destroy him. Neither backed down, and each turned in performances worthy of acclaim.

It took long enough for Halep to ascent her mountain. It has been so long since anyone has been able to even breathe a frosty wind onto Nadal’s beard at Roland Garros. We knew it was coming, and we didn’t. We prepared for this either way, and, yes, so did they, in remarkable and outstanding ways.

[1] The Freshmaker! And also, the destroyer of sodas.

[2] By tennis standards, among others

[3] Stan Wawrinka in 2015, and Novak Djokovic in 2016; curiously, only Djokovic actually beat Nadal, Djokovic in 2015, on his way to a final, which he subsequently lost. Nadal withdrew in the third round in 2016 due to an injury to his dominant left wrist, one in a sea of injuries to top players that year.

[10] Who has an excellent birthday, the best birthday per sources, it must be said