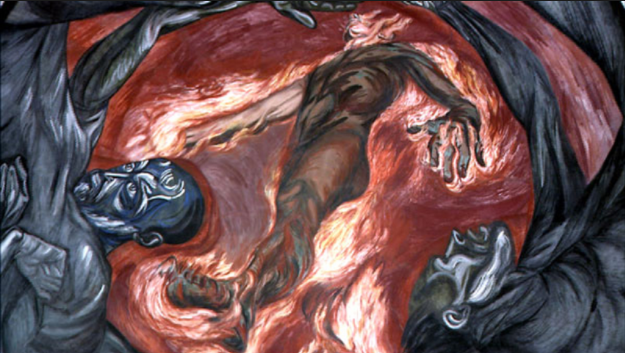 Both Davis and Cousins were named All-Star starters. Cousins had a 44-point triple-double against the certifiably hapless Chicago Bulls and followed that up two games later by going 16-13-11 in the very game he went down for the season with a torn Achilles. At the time, the Pelicans were the aforementioned 27-21, sitting in an uncomfortable-yet-manageable sixth in the Western Conference, half a game up on the Portland Trail Blazers and six and a half up on the Utah Jazz, looking to finally bring Boogie to the postseason while giving The Brow only his second playoff series ever.

Many bemoaned Boogie’s injury, yours truly included as a witness, believing it spelled doom for New Orleans. The Pellies nabbed Nikola Mirotić from the Bulls in an effort to steady the front court, and then 35-year-old ex-Rookie of the Year and former Charlotte Bobcat Emeka Okafor, having not played since the last time the Knicks made the playoffs (2013), showed up to alleviate some things.

Here are some charts, showing exactly what AD has done with and without Boogie this season in essentially replacing Cousin’s 25.2 points, 12.9 rebounds and 5.4 assists per game[1]. In blue are Anthony Davis’ averages before the Cousins injury; in red, those same stats post-injury, and now I’m trusting you to be able to read a graph without a title: 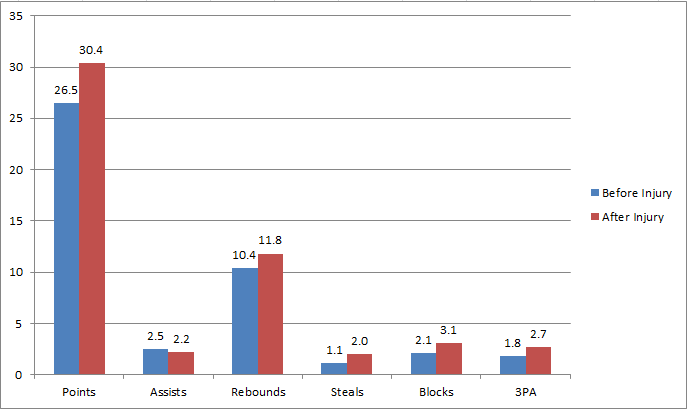 All stats courtesy of basketball–reference.com

All of the sudden, New Orleans wasn’t bound to anchor itself at its pre-Boogie injury win total and hope for contract negotiations to break their way. Anthony Davis remembered that, at his best, he is one of the five best basketball players walking this planet, and he essentially decided that he’d like to go ahead and have a playoff berth, Alex. For his efforts, he’s even shoved himself back into the MVP conversation, albeit nominally given James Harden’s incredible season, though Davis may very well still finish in the Top-3.

He, along with the outstanding show that Holiday has put on and the now-underrated playmaking ability of Rondo, has willed the Pelicans to the playoffs again. Better yet, the Pelicans have already clinched a playoff spot and currently sit fifth in the juggernaut West, although that is subject to change given any number of win-loss combinations that could occur Wednesday night.

Merely calling what AD has done over the past three months “remarkable” is reducing it to winning a third grade spelling bee, or hitting a half-court shot to win a car. Davis’ skill set is still beyond comprehension and, at 25 years and a single month (as of today) old, may very well not yet be fully realized. As Elgin, Oscar, Magic, KG and LeBron have, Anthony Davis still carries the possibility of changing the very game of basketball as we know it, provided he has enough supplies on such a lonely island to see himself through to the other side.

A necessary aside: Cousins’ contract is up this summer. It is a tough fact with which the Pelicans’ organization knew may have to reconcile when it traded for him last year, and now, not unlike Kawhi Leonard on a longer deal in San Antonio, it raises as many question marks as a suit tailored for Matthew Lesko. Even so, the Davis-Cousins partnership worked for the half of a season under Alvin Gentry that should matter, and the Jrue Holiday signing has not seemed to be a bust yet, even in the slightest[2]. All of this could and should matter in Cousins’ free agency decision.

There was a time when The Brow™ was bound to be the greatest NBA player alive. That time may have passed, and it may also be ahead of us (LeBron’s obscene bill of health and unimpeachable greatness is the only thing keeping him from getting right there for a sustained period, really). Right now, there is no reason not to enjoy Anthony Davis, and with the Pelicans headed into the playoffs, there are at least four more opportunities to do so. Hope for more.

[1] I’ve limited this to counting, box score stats because that would figure to show his raw power, but if you’re into that sort of thing: his advanced stats are equally mind-numbing.

[2] Not to mention Rondo, whose untethered passing genius has remained into meaningful minutes this season, buoyed by a better-than-career-average shotmaking ability and the kind of veteran leadership that coaches often espouse but which rarely sees manifestation on the court. And yes, Rondo has always been a personal favorite of mine, but he really has been good this season in New Orleans, a full decade(!) after he won a championship in Boston.