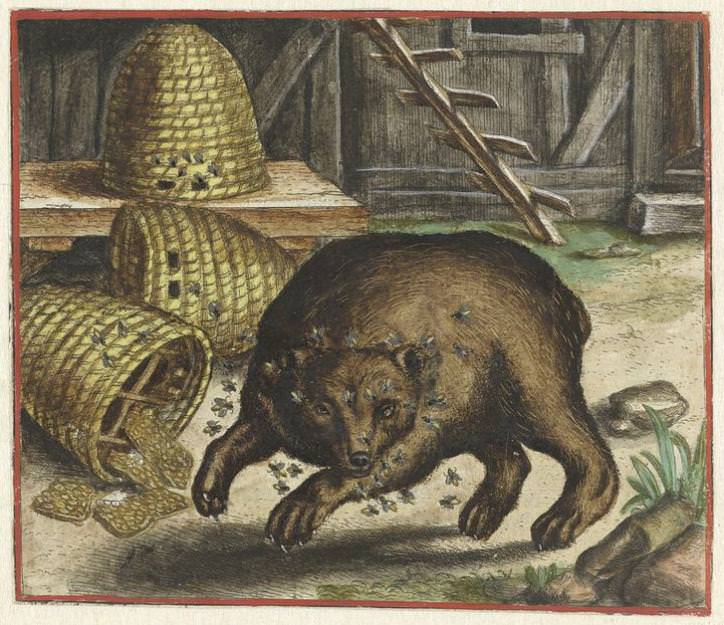 Fable of the Bear and the Bees, Marcus Gheeraerts the Younger

The last time we took a close look at Andre Drummond – collectively, you and I, because we’re in this incomparable, unprecedented mess together, as we’re reminded the instant we awake every single day – he was dominating in the archaic sense for the Detroit Pistons as a 22-year-old center, posting grotesque point and rebound totals, particularly on the offensive glass, while not paying much mind to the trends that had already begun shaping the NBA as it is today.

After his historically-hot start, Drummond cooled off, finishing that season averaging 13.8 points and 13.5 rebounds while shooting 38.9% from the free throw line. The Pistons stumbled to a 32-50 record, but at least Drummond was consistent. While big men such as Kevin Love, Chris Bosh and Anthony Davis inched farther from the paint on offense, and Draymond Green was busy redefining the very idea of what a center could be with Golden State, Drummond remained the platonic ideal of centers in bygone eras, towering boulders built to destroy purely by force.

Now, in 2017, Drummond is 24 years old, still patrolling the paint for the Pistons and, mostly, doing it in the sense you’d expect: feasting on smaller defenders around the rim and grabbing offensive rebounds by the truckload. He garnered an All-Star nomination in 2016 doing just that.

The major strike against Drummond, if shooting threes is to be forgotten entirely, has always been his free-throw stroke. Coming into this season, Drummond’s career mark from the stripe was an abysmal 38.1%. While his current mark, 38.6%, is still the single worst of any player shooting more than four shots from the line per game, he has markedly improved: through 20 games, typically a reasonable sample size for evaluating a team’s or player’s progress in a new season, the UConn product has shot 63.0%.

It’s not great by most standards, it also doesn’t render him unplayable in the closing minutes of tight games, when teams would be more inclined to Hack-An-Andre (Hack-Andre?). He was especially exquisite in perhaps his, and the Pistons’, finest game of the season, a 118-110 victory over the white-hot Boston Celtics that pitted two of the best teams in the East against each other. In it, Drummond finished with 26 points, 22 rebounds, 6 assists and 4 steals while going 6-8 from the line.

In that game, every Pistons starter finished with a +/- greater than +10. Tobias Harris was similarly fantastic, and Avery Bradley savored delicious revenge over his former club. It was a sublime showing from a 14-6 Pistons team outperforming expectations. It has everything to do with Reggie Jackson’s having his head on straight, Harris’ continued development, Bradley’s “should’ve been First Team All-Defense” defense, the contributions of a startlingly good bench unit and, not least of all, Drummond’s newfound appreciation for undefended points 15 feet from the backboard, his acknowledged home.

Whether Drummond can maintain his confidence from the line may very well dictate how these Detroit Pistons fare this season. Already boasting wins over the Celtics, the Warriors and the Thunder, the Pistons are riding a three-game winning streak and sitting pretty in an Eastern Conference similarly outperforming expectation. Andre Drummond-as-suddenly competent free throw shooter is not a stylistic makeover akin to, say, Brook Lopez shooting threes, but he started with a low bar and seems able to push the ceiling of this Stan Van Gundy team even higher than we could’ve imagined.