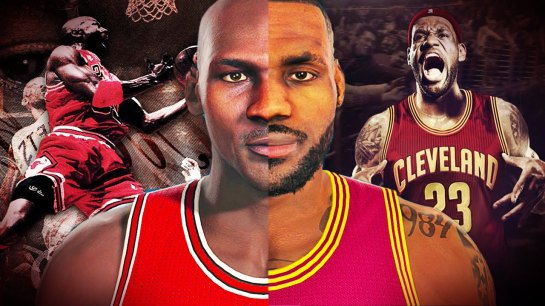 So, LeBron has had some kind of beard for the majority of his career. It’s evolved almost like he has as a player! He claims to have gone full “Tom Hanks in Castaway” at some point, which is cool, if you’re into beards (You probably are). Jordan, on the other hand, has typically gone with a mustache. He’s had a goatee before, but never a beard. What does that tell us? He probably can’t grow one, obviously. Also, I just found that MJ essentially rocks what is called The Hitler. My God, that’s embarrassing.  Advantage: LeBron

Okay. This one is absolutely one-sided. In the late 80s, Michael Jordan had a very minor case of balding (why is there a YouTube video about this??) going on (he’s always kept his hair low, just like me!). Then, BOOM! No hair. The bald, iconic MJ we all know and love! If there’s any lesson that I think I learned quickly, it was to not fight the follicle fight. If your hair is thinning, just cut it. Keep it extra low (if your head shape isn’t bald friendly), or just go bald. It’s not worth it. LeBron is…fighting the follicle fight. Hard. He is not winning. But, it has been fun to watch his hair journey! He’s even made jokes about it! First it was thinning! Then he got a headband to cover it! Then a bigger headband! Then his hairline wasn’t thinning! Then it was! IT’S TOO MUCH TO KEEP UP WITH!!!! Advantage: Jordan

So, LeBron and Mike have kind of left some things to be desired here. For fairness, I’m only considering their playing career. But anyway, Mike is well-known for his “Republicans buy shoes too” quote early in his playing career. While that is/was a fact, it was weak. Somehow, Jordan was never really challenged on any political or social issues. Maybe everyone wanted to just stick to sports back then or something! On the other hand, LeBron has been vocal on social issues, from the strong show of support for Trayvon Martin to the really weird opening at the ESPYs with Carmelo Anthony, Chris Paul and Dwyane Wade. But! It’s a start. We could have a conversation about “Well is it really the responsibility of athletes to speak out on social/political issues”, but that’s for another day (My answer to that question would be YES, by the way). Advantage: LeBron

Even though Michael Jordan wears Midlife Crisis Dad Jeans, I can’t think of anyone who wouldn’t want to hang out with him. He’s always exuded a sense of cool. Hanging out in Vegas, playing golf with buddies, having guys like Charles Oakley in your “posse” are all things that cool guys do. It’s not that LeBron isn’t cool, but some of the cool things (like being on the jet ski with Melo and Chris Paul) just come off as corny. I guess he’s got time, but, for now, the advantage goes to Jordan.

So this is probably no contest. Michael Jordan is so revered, people are asking stupid questions about athletes from other sports. I’ve lost count of how many “next Jordan” guys we were force-fed (I’m looking at YOU, Isiah Rider). The accomplishment of going 6 for 6 in NBA Finals appearances is still something that grown men like to cry about. Having a bald head is cool because hey, Michael Jordan did it. MJ left his first wife for a younger lady, and no one noticed. The dude is like Teflon. As for LeBron? Well, he’s well liked, but he’s got a long way to go before really having the overall impact that Michael Jordan *still* has. Advantage: Jordan

So, with a score of 3-2, Mike edges out LeBron. You could say that the same thing is happening in relation to basketball accomplishments (Jordan only sort of ahead of LeBron at this point). Actually, don’t say that! Only because some Jordan stan will probably come up out of the ground to debate you. I don’t think that this exercise has given anyone any more clarity on who may be better. But don’t let me act like that was the point or whatever.