Since it was the 1970s and ‘80s, there are some pretty serious mustaches in this show — not the ironic hipster mustaches that everyone in Brooklyn has, but mustaches that were an acceptable personal style choice at that point in history. While in 2016 I am definitively against the mustache as a solo form of facial hair, the late ’70s and early ’80s were a different time, a time defined by the mustache (was it? I don’t know. It certainly feels like it in this show).
As a result, while I do actually enjoy the show, I can’t help but be regularly distracted by this… creative decision? Historical accuracy (Pablo had a legit mustache in real life, I don’t know a thing about anybody else)? I don’t know; all I know is that it’s literally the first thing that comes to mind when I think about the show. So, obviously, I had to rank the five best. 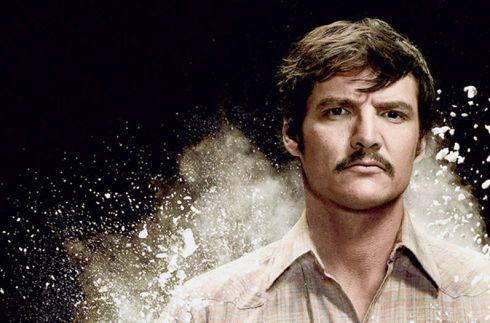 Something about DEA Agent Pena just exudes sex appeal tbh, but I am not here to talk about that, so I won’t. He wins this by a mile for somehow managing to look dignified and sexy despite the hair growing on his upper lip, and only his upper lip. I am also biased because I love the name Javier.

Wagner Moura’s Pablo is equal parts terrifying and weirdly human, but the mustache he has grown for the role is the piece de resistance of his Pablo. It’s a powerful mustache for a powerful dude, and even I can recognize that.

Berna joins us as a leading character in Season 2, as the guy in charge of protecting Judy Moncada, a mortal enemy of Escobar. Berna is rocking a full-on dad-stache. Look at that mustache and tell me you haven’t seen it on hundreds of dads before. It’s a look that says, “I’m well aware that I have shaved every part of my face besides my upper lip; what’s it to you?” It is a look that says, “I’ll get shit done.” Don Berna just seems like a mustache guy, so he can have this one.

Gustavo has a lot going on accessory-wise, and I can’t decide if it’s believable for the time period or just makes him look like he’s trying to go incognito all the time (Seriously: hat, glasses, mustache? A.K.A., the disguise you buy at every joke shop in the world?). At the same time, being an international man of mystery works for him, since he’s, you know, basically the second most important coke dealer in the world until (*spoiler alert*) he dies.

DEA Agent Murphy has to come last. I’m sorry. It is a definitive and distracting mustache, but first of all, I thought blondes couldn’t grow facial hair? Second of all, Boyd Holbrook has fantastic facial structure, and I’m angry that this weird thing above his mouth is taking away from that.

There are fewer stand out mustaches than I had remembered, but they’re still distracting me from the subtitles I have to read since I’ve forgotten most of my rudimentary Spanish skills. Soooo… good work on costuming and makeup, I guess? Whatever, I’m here for Agent Pena.