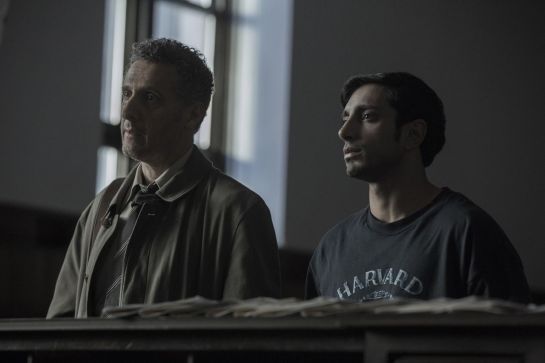 That isn’t to say the story is boring. Instead, it strives for realism. When Detective Box describes two black men sitting in a jail cell, he says they’re going to prison because they look guilty (read: they’re black and have tattoos.) Box says Naz doesn’t look like a killer; therefore, they need a more thorough investigation. He doesn’t sugar-coat it. He’s curt and straight to the point. His description of the realities of race in the justice system isn’t idealized and neither are the show’s. There hasn’t been a grandiose speech about innocence or injustice, just Naz’s solemn resignation as he enters prison and the quiet defeat that comes over Stone’s face when he learns he no longer represents the Khan family.

It’s the absence of these heroic moments that makes the show so haunting. It doesn’t shy away from any unflattering aspect of the prison system. Even getting into prisoner to see a loved one is grotesque. It was hard to watch the prison guard grope Naz’s mother to ensure she wasn’t smuggling in contraband. It felt like watching someone being violated on a level I’m not sure I’ve seen on television before. It was only made worse by the look of resentment and bewilderment on Poorna Jagannathan’s face. Scenes like this don’t seem gratuitous either. Only moments before this, we saw illicit items entering the prison. The only thing worse than the invasive treatment was making it appear justified.

The biggest shift in the show’s plot was done subtly, by introducing another lawyer into the fold, Alison Crowe. We don’t know much about Crowe just yet. She has an office in a swanky New York high rise. She exploits a co-worker’s race (which came off as a typical sleazy lawyer tactic, but also foreshadows how Crowe will present a case using Naz’s outsider status to his advantage). Glenne Headly plays the character as soft-spoken but cunning. Crowe knows the business as well as anyone, and while she offered to take the case for nothing, she doesn’t do anything in this industry for “free.” The question I’m interested in going forward is, where is the payoff?

More importantly, I’m confused how the show wants us to feel about her introduction. Are we supposed to feel empathy for Stone after he loses his client? It seems that way, as the show takes pains to depict him as a down-on-his-luck lawyer with the visits to the dermatologist and the hacky business cards. But The Night Of is also clear that Stone is in over his head. The prosecutor is overjoyed she’s facing Stone in court, and just one review ago, I openly questioned whether he’d be the reason Naz ultimately loses this case.

Neither Stone nor Crowe hold the moral high ground. Sure, Crowe took advantage of a junior lawyer’s race to swindle the case away from Stone, but the last time we saw him in the Kahns’ living room, he was asking for money he knew the family didn’t have, just to try and get a plea deal he knows the family doesn’t want. At least Crowe comes with experience, the backing of a large firm and the desire to win the case, all at the price tag of zero dollars. Sure, that description doesn’t have the romance of a white-knight attorney swooping in to deliver a rousing closing argument, uncovering the damning piece of evidence that saves the case, but as I already noted, The Night Of isn’t that show. I’m willing to settle on Crowe as a hero in this instance. I’m just not sure the show is.

Again, the show is concerned with realism. The cacophonous background noise of the prison, the muted jumpsuit, Naz’s vigilant gaze as he takes a shower: those are the moments when the show thrives. Which is another reason I’m hesitant to embrace Michael K. Williams in the role of Freddy, the incarcerated boxer who is befriending Naz, and like Crowe, I’m wary of his motives.

More importantly, I’m not sure what role he serves. The prison is filled with archetypes, the criminals ready to punish Naz for mistreating a woman, the crooked guard bringing in contraband. Freddy serves the role of a kingpin who runs the prison. His “presence” is enough to scare off Naz’s would-be attackers. Again, I think it’s too early to judge the role he’ll play in this series, but I don’t know how interested I am in the story of an innocent man being swept under the wing of a man atop the prison hierarchy.

But again, The Night Of seems less concerned with the inciting incident with each passing episode. The only reference to the actual murder was in the show’s title and in a brief glimpse of crime scene photos on the prosecutor’s desk. There was minimal detective work or advancing the storyline of his guilt. The show is slowly becoming the story of what happens when you’re accused of murder and the characters you’ll meet along the way, and is decreasingly interested in whether our main character actually committed the crime.