If you’ve ever debated the best shows on television, you’ve probably had some iteration of this conversation. And you know what, that person was right: The Wire was the best show on television. While titles like Breaking Bad and The Sopranos may be popping into your head, the fervent devotees are quick to note the series that depicts an unflinching portrait of Baltimore is undeniably the best. I’d argue its construction is the closest anyone has come to putting a novel on television.

Now, unpopular opinion alert: Orange is the New Black just stood atop a cafeteria table and silently declared itself the best show currently on “television.” It did so by following the blueprint laid out by The Wire.

Silently is the operative word there, because the show hasn’t generated the type of buzz your traditional, serialized drama other than that of this caliber would. Netflix, and its data-dumb format, rarely generates the water cooler (or Twitter, or blogger) conversation that traditional television shows can. The weekly installments give the audience time to digest each episode, then turn to their preferred means of socialization and consume more, to parse every piece of dialogue and come to a deeper understand of the series as a grand piece of art. Or maybe just gossip whether you ship Tormund and Brienne of Tarth.

The convenience of releasing a series all at once, however, creates difficulties in how viewers discuss it. For the last week, I’ve started every discussion of the show with, “What episode are you on?” Naturally, the follow-up question is, “Is that the episode where… happens?” Few provide episode-by-episode recaps like the A.V. Club, so audiences are forced to consume their reactions the same way they consume the series: all at once. So that they aren’t out of the conversation, most critics post their reviews immediately after the debut, where we consumers trickle back only after we’ve watched the show in our own time. While I didn’t have any major events spoiled, I saw articles with titles like “Let’s Talk About THAT Death In Orange is the New Black,” which clouded how I viewed each episode. I was forced to watch the season as leading toward an inevitable death, whether the writers intended that for us or not.

Still, the quality of conversation doesn’t disqualify a show from being great. OITNB truly is. It became so by, essentially, becoming the The Wire. 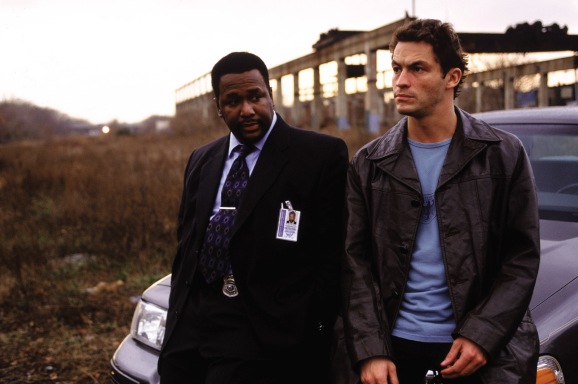 The Wire and OITNB start at different places. The Wire has its cynical tone from the beginning. It know its main character is Baltimore rather than any individual player in the game. You’re left rooting for Avon’s gang to succeed just as much as for the cops to catch them. The show knows it doesn’t need a single villain, a big-bad; every person has their nuance, their flaws, a reason to root for them. The drug dealers have families to care for. McNulty is a womanizing alcoholic (not in the good way).

OITNB commenced as a fish-out-of-water comedy. Piper Chapman is a privileged white girl, sent to prison over her role in a drug smuggling ring she was accidentally a part of. Now she is surrounded by murders and thieves. The show has the big bad. At first it is the mustachioed George Mendez. Then, in season two, OITNB introduces Vee, who displays some shades of gray the way she serves as a mother figure for Tasystee, but mostly exists to unite our heroes against her.

Orange has built sentimentality into its DNA as well. Infusing episodes with Lost-like flashbacks allowed audiences to sympathize with women incarcerated for committing crimes. The show also pushes Piper away from center stage, and has created an ensemble story. That’s also where The Wire thrives. Its bit characters bring the series to life. The Wire series never narrows its scope, but rather lets it grow by introducing the docks, the schools, politics and more. While OITNB is confined by the walls of the prison, it grows through time, using flashbacks to built depth to each character. The show could focus on a single character and then hardly give them a speaking role in a season. Seriously, where was Chang in season four?

It’s that nuance that made the climax of the season’s penultimate episode so impactful (If you’ve read this far and still haven’t finished the season, seriously stop now, spoilers are coming). As Myles McNutt wrote at A.V. Club, “While some of the mistreatment experienced by inmates comes at the hands of people like Humphrey, or under the direct leadership of Piscatella, it’s just as likely that a poorly trained guard who was never suited to the position will be put in a bad situation by a culture of mistreatment, and something tragic will happen.” No situation of consequence is painted in black and white. As a viewer, the show leaves you just as devastated for Bailey as you are for Poussey or her friends, because the show portrays how the system failed the prison’s employees as much as it did the inmates.

It’s the sense of systematic failure that permeates this season that reminds me of The Wire the most. David Simon wasn’t concerned with pitting drug dealers against cops but rather with pitting the underprivileged against a society designed to denigrate them, showing how the decisions of politicians in the state capital would affect the lives of innocent students in a public high school. In OITNB, we see the same, as Warden Caputo is unable to confront his bosses at MCC and succumbs to his own vices (women), which ultimately leaves the prison at the mercy of untrained guards twice, both resulting in catastrophic consequences (Suzan partaking in a prison fighting ring, followed by Poussey’s death). Depending on your feelings about Caputo, you would raltionalize the first night as an innocent mistake. He doesn’t understand the malice his guards hold toward the prisoners. The second time is plain negligence.

The show knows it. More importantly, Caputo knows it. He understands he’s complicit in Poussey’s death. He keeps running into the brick wall that is MCC in his attempts to rectify the situation, because we see he’s a good person who wants the prisoners treated like human beings. That ultimately makes the season all the more devastating, when even people who want to help are ultimately helpless. An earlier season would have played this institutional incompetence for comedy. Season four uses it as a catalyst for tragedy.

Where this show goes may be anyone’s guess, as OITNB was transformed itself from a comedy with heart to a prestige drama with moments of catharsis through comedy. With the season’s finale fresh in my mind, my instinct is to say the future of the show hinges of whether Dayanara pulls that trigger. But, in a way, it doesn’t. Season four was about the consequences of prison and neglect. It was pessimistic, as those crushing blows came for everyone. The show can continue that thesis in a Games of Thrones-ian way, where the destruction caused by incarceration can be pummeled into the minds of viewers, or it can take a page out of The Wire and propose a solution to the chaos, and with it, a glimmer of hope.

In season three, in an attempt of solve the endless struggle between drug dealers and police officers, Major Colvin enacts a free zone, affectionately nicknamed “Hamsterdam,” where drugs could be sold without consequence, so long as they left the neighborhood corners. Let’s not get carried away and think the show suggested it solved the War on Drugs, as the program is shut down and Colvin fired over stunt, but for a brief moment, the constant struggle between dealer and officer is eased. There is a compromise and hope for peace.

If OITNB truly wants to follow in the footsteps of its new spiritual predecessor, I believe this is the direction they should precede. The show must continue to acknowledge the dilapidated state of our corrections programs and the realities of social and racial inequality, but most importantly, it must truly join the conversation with hope and a solution to rectifying these injustices.

Either way, it has picked up the mantle I didn’t think would be carried again, and at least for one season, The Wire has an equal. Perhaps sometime in the future, we’ll all be having the following conversation:

“Hey, have you seen Orange is the New Black? No? It’s the best show ever.”