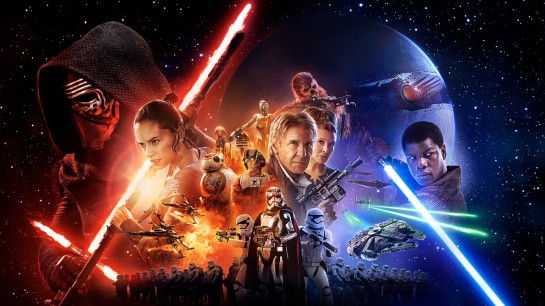 Despite what Resistance members think, the Millennium Falcon was the symbol of screeching rebellion in the Star Wars universe. It sped through different solar systems with reckless abandon as its wise ass star commander, Han Solo, threw another crushed beer can over his shoulder and howled alongside his trusty pet Chewie as if he were the Kenny Stabler of outer space. The Falcon and its crew were dripping with the same kind of blustering machismo that Bert Reynolds possessed with his Pontiac Trans-Am in 1977.

The galactic cruiser was George Lucas’ cosmic pussy wagon, most likely the setting for Princess Leia and Solo’s conception of Kylo Ren (Adam Driver), The Force Awakens’ main baddie. It’s a sacred piece of Star Wars iconography that is revered in the same, tired way as your dad’s own fondly remembered piece of American steel: they just don’t make ’em like they used to. That’s why the most refreshing part of The Force Awakens was new hero Rey’s (Daisy Ridley) snap declaration that it’s a scrap heap.

The sequence that followed our heroine’s assessment is one in which she has to figure out how to pilot the decrepit lemon along with Storm Trooper-turned-Dark Side deserter, Finn (John Boyega). It was at this exact moment when I sat up in my chair, my eyes all aglow. Here were two people, somewhat unfamiliar with the mechanics of one of pop culture’s most iconic vehicles, evading Tie-Fighters and racing through the planet of Jakku, passing by titanic Imperial Starships buried in the sand as if they were the Pyramids of Egypt.

Abrams’ initial initial irreverence for the Falcon deflated into fawning as Rey starts to marvel at the power of good, old intergalactic muscle once she escapes. The sequence was used to confidently tell an audience that has been exposed to the possibly racist caricature known as Jar-Jar Binks and a whole saga devoted to pod racing that he knows the franchise’s peaks, and he’s not going to bother with going down a valley. It was Abrams doing his best Han Solo impression. Part of Han’s schtick, however, is that his rouse is deemed full of shit when pressure is applied.

Like the original Star Wars films before it, the film’s strengths are in the action sequences and the storytelling ability of those sequences. More was revealed about Rey and Rylo Ken when lasers were whizzing and star ships were roaring in the skies. Exposition through dialogue and the “twists” that some see as key are somewhat secondary to the original canon’s maximalist destructo playground where starships go to crash land.

The benefit of 38 years between A New Hope and this latest installation means that the crashes are no longer made of clay but are now CGI-developed explosions to enhance the stakes of the main plot. Likewise, the advances in special effects allow Abrams to use a planet the size of Jupiter as an updated Death Star rather than scale it as some moon orbiting Venus. Abrams shows you the kind of warped mind Ren is operating with by wiping out a whole system of inhabited planets, as seen through the eyes of those light years away, and contrasting it with those who are anticipating direct impact of a scorching red beam. Vader might’ve been a dick with a stink bomb, but Ren, along with the movie’s new institution of evil known as the First Order, is bent on cherry bombing everyone.

There is also a fair amount of fun in the fan-servicing aspects of the return of the franchise. There’s Harrison Ford’s return signaled by his hallmark mischievous smirk, and Carrie Fisher now adorned with a hair braid shaped like a crown rather than her signature side buns. For every nice reintroduction, however, there is an eye roll reserved for C-3PO’s peckish enthusiasm which, literally, comes out of nowhere. There’s also an appearance by R2D2 because Abrams really wants to let people know that he’s not going to fuck this up. He’s going to pay homage to the original in as much time as he can while also telling the story that he, Lawrence Kasdan and Michael Arsdan wrote.

That story, by the way, is basically A New Hope with some rewrites and a bold font. There is not a whole lot of originality of which to speak. The journey begins on a desert planet; an unlikely hero is found amidst its salvage; there’s a cute, little robot bleeping and booping at everyone’s heart strings; and a planet-sized space shuttle needs destroyin’. Oh, and daddy issues are once again thrown in for some psychological color. Even the cantina scene is here, but instead of intergalactic klezmer playing in the background, Toots and the Maytals-inspired lounge players are your evening’s entertainment. It’s the same plot covering the same ground but with a fresh-faced, more diverse cast.

For a tent pole movie, all of the performances work. There is nothing awful or gratingly corny about any one of them. As Ren, Driver almost steals the show near the end of his turn; he somehow manages to jump out of his straitjacket, labeled “smug Brooklynite,” long enough for someone to brew a cup of psychedelic tea in a Bushwick apartment without him reverting to type. Ridley’s work as the movie’s new generation of Jedi is decent and, like Hamill’s stint as Luke Skywalker, may be a career-defining role. The two performances that could have had a little more screen time to simmer were that of Oscar Isaac’s Poe and Boyega’s Finn, the relationship between the two carrying the kind of buddy cop chemistry that demands its own movie.

As a whole, The Force Awakens is technically proficient while also hitting the right marks and missing less than a handful. The movie’s biggest flaw is that it doesn’t do anything to expand the universe George Lucas created from scratch so long ago or set out to be anything more than Abrams’ re-imagining of Star Wars: Episode IV. In that regard, it suffers because there’s not the same kind of discovery and wonder that made the original movie a phenomenon. You’ve seen all of this stuff before. The same fighter planes that raced through A New Hope are flying by with nothing to show but a new coat of paint.

The only thing that remotely opened up the expanse of the universe was the introduction of new Lovecraftian monsters with a pencil sharpener that resides inside a gaping yawn. But they were disposed of as soon as the movie’s unofficial star, the Millennium Falcon, was fired up and out of a freighter. The mystery was gone in a flash. I’d like to tell you that the odyssey was less predictable from there, but that would be like me trying to tell you that Classic Rock radio formats are different in outer space.