A little before 7:30pm I had to roll out, with plans to meet my cousin for more drinks later in the evening. At the time of my departure, there was about ten minutes left in the Broncos-Seahawks game, the Broncos defense had just forced a safety to cut the Seahawks lead to 17-5. I felt pretty good about my chances of Seattle (-5) covering as my feet hit 83rd street, but as I walked south towards my subway station I chanced upon a bar with open bay windows and a big screen showing the game. Peyton Manning was driving the field and eventually hit Julius Thomas with a three yard touchdown pass to make it 17-12. My bet now felt like a sure push.

I decided to wait and see what happened on the next few drives, and what followed was one of the most exciting conclusions to a game so far this season. This is because I watch games as both a football fanatic and gambling addict. Sometimes, both of those synapses in my brain start firing on all cylinders and a perfect union of football appreciation is born. Allow me to explain.

Football Perspective: Wow, Peyton Manning is amazing. The Broncos might be able to win this game. There’s plenty of time left. To be honest, I’m shocked they’ve been able to keep it this close for this long. In Seattle no less!

Gambling Perspective: Fuck. Seattle (-5) was looking like a comfortable win and has now turned to a push. Peyton looks sharp. Why do I bet against Peyton Manning? It’s always terrifying. But whatever. You decided that you would follow RUSSELL HUSTLE BUSTLE WILSON to the end. You make the bed you lie in. I guess a push isn’t so bad. If Seattle gets the ball back up five with any less than four minutes left, they’ll probably only need two or three first downs in order to seal the win. We need two more stops of Peyton Manning and the push will hold.

Football Perspective: Oh man this is great, can Peyton Manning pull off some dope Peyton Manning magic and win this football game? Super glad I stopped to watch.

Gambling Perspective: This is exactly how you lose bets to Peyton Manning. Come on Legion of Boom, you can’t give up one first down. If you give Manning one, he will take everything you have.

Football Perspective: Wow. Classic Manning. What a time to be alive and watching football.

Gambling Perspective: Ugh. Shit. Classic Manning. The Seahawks are definitely not covering, and to be honest, I am pretty worried about saving a push. Either way it is four down territory. The Broncos will either score a touchdown and hand me a losing bet, or they will turnover the ball on downs, at which point the Seahawks will be able to run the clock out and my bet will push. Is there any way I could win my bet? Geez, I guess if the Seahawks snagged a turnover and returned it far enough into Denver territory, it’s possible that they would get stopped and score one more time. But at this point, it’s more likely the Seahawks would just dive on a turnover; they would only need like two first downs to end the game. It’s not like Kam Chancellor is going to almost take one to the house or something.

Kam Chancellor intercepts Peyton Manning. Down at the Denver 35. 2:25 left in the 4th.

Football Perspective: YEAH SEAHAWKS. What a play. Only two first downs away from the sealing the win. I can’t believe they stopped Peyton Manning from doing Peyton Manning things.

Gambling Perspective: AHHHHHHHH! The push is live! The cover is live! If the Seahawks get two first downs, I’m pretty sure they’ll be able to kneel the game away. But they really only have room for two first downs, meaning if they break a play, they may be forced to score. Also, if the Broncos stop them before either first down, they can kick a field goal for an eight point lead and I win my bet. What a time to be alive gambling on football.

Football Perspective: Peyton Manning still has a chance to tie this game. Remember how terrified your gambling perspective was of him just a few moments ago? It’s possible the Seahawks left too much time on the board.

Peyton Manning drives the field and scores a touchdown to Jacob Tamme. 20-18 with 2-pt conversion pending. 0:24 left in the 4th.

Football Perspective: Wow. That was impressive. I really hope that the Broncos get these two points so they can force overtime and I can watch more football.

Gambling Perspective: Fuck. That was impressive. I really hope that the Broncos get these two points so they can force overtime and the Seahawks have a chance to cover (-5).

Gambling Perspective: Wahoo! All Seattle has to do is win the toss, elect to receive the kick, then score a touchdown on the opening drive of overtime. They win by six and I cover my bet.

At that point at had to pull myself away from that beautiful television so my cousin wouldn’t be waiting on me. But I left a vote of confidence for my boy RUSSELL HUSTLE BUSTLE WILSON before leaving the game behind. 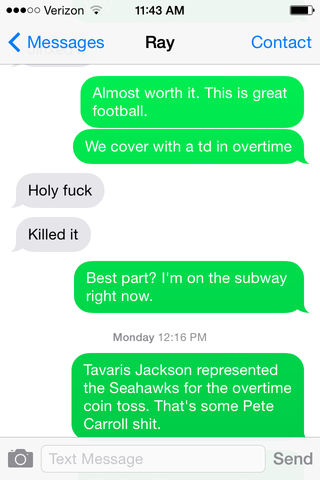 This is one of the many reasons why I love gambling. It enhances my appreciation of this crazy sport we call football. I love the math that is always happening in my head when a game reaches a volatile point; I can’t stop myself from attempting to calculate probabilities of certain outcomes, even if my math is guesswork and based more in “logic and emotion” than “numbers and formulas”.

And this is why I write these columns. I hope to share with you just a bit of the joy that gambling brings me. Here’s the Week 4 lines, home team gets the asterisk. 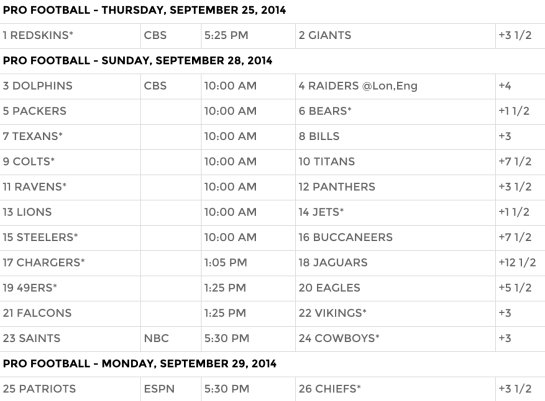 It’s our first bye week of the season with Seattle, Denver, St. Louis, Arizona, Cincinnati, and Cleveland all taking a rest this Sunday. Bye weeks make the process of picking games more difficult, as there are less games to choose from and sometimes a team you were planning on riding (Seattle, Arizona) is not available. But we pick on, boats against the current, borne back ceaselessly into the past.

It’s hard to justify betting on the Jaguars. It objectively seems like a bad idea, especially when tweets like these exist:

In his first two quarters, Blake Bortles threw for 223 yards and two touchdowns. In ten quarters under center for the Jaguars, Chad Henne had thrown for 492 yards and three touchdowns. Blake Bortles was on pace to match Chad Henne’s stats in half the time. Sure, Blake also threw a pick six, another interception, and got taken down for a safety that was called back due to a defensive penalty.

This line feels a little off. Last week the Titans got beat pretty handily by the Bengals, but the Bengals might be the best team in the AFC right now. Meanwhile, the Colts’ only victory came against Chad Henne’s Jacksonville Jaguars. They lost last week to my Philadelphia Eagles, and while I am super amped that we’re 3-0, I am still extremely paranoid that the Birds are actually a terrible team. We might be what the 2013 Chiefs were last year.

Neither team gets the asterisk because this game is being played in London. One problem with playing a professional American football game in London is that two teams need to fly all the way from America to London to play it. The Oakland Raiders arrived in London Monday morning at 8am. They have been operating on a regular practice schedule on London time.

The Miami Dolphins arrived in London Friday morning. The picture above is of a man that will be playing a professional football game in a foreign country in less than 48 hours. There is a pretty good chance that a Miami Dolphin will literally fall asleep on the pitch at Wembley stadium. There will definitely be a lot of yawning.

This is just me standing by my “Dallas is bad” theory. And I feel like if Drew Brees and the Saints offense still have the ability to put up 40 points in a night game, this would be a pretty good time to do it.

I am running late and thus left my last pick to the Twitter Gods.

Rob, my friend and confidant from my Fordham days was first to respond, but he inadvertently picked the Raiders, who I already selected. Rob is a committed Jets fan, so I put him on the spot.

@tylerlauletta Y. Ever the optimist

This is me trusting the system.