Everyone has seen The Old Guitarist. It’s one of those paintings, like The Mona Lisa or Starry Night or The Persistence of Memory, that has survived time and trends and somehow made it into the Western cultural subconscious – people who don’t like or know anything about art still vaguely recognize it. If you’d like to see The Old Guitarist in person (and you should, even if security tells you not to), the painting hangs among the walls of the Art Institute of Chicago. It’s something else.

The subject matter is simple: an old, blind beggar playing a guitar in rags on a Barcelona street. But what’s noticeable is how the color palette plays to the subject matter, a gradient of blues that sets the tone of the painting. It’s not the only one: Between 1901 and 1904, Pablo Picasso painted several works with a similar eye that are still being examined today – in fact, just this week, it was revealed that infrared technology had uncovered another layer in 1901’s The Blue Room.

Contemporary critics and the public, however, did not receive these paintings warmly. The beggars and prostitutes of his art soured crowds that had been showing a great interest in his work just a year before. We know it now as Picasso’s Blue Period, a dark layover in the artist’s life.

So you’ve got one of the great artists of his time making challenging works – some inarguably among his best – in a state of desperation and nobody’s noticing. This is a post about art, sure, but it’s also about sports. And no one is painting a more desperate picture in the art of motorcycle racing right now than Jorge Lorenzo.

It’s getting harder to remember a time when Lorenzo was the toast of MotoGP. His 2008 debut was the most anticipated since Dani Pedrosa’s step up from 250s two years before partly because of Lorenzo’s record (he had won the two 250cc championships since Pedrosa’s departure), partly because of the rivalry between them (King Juan Carlos I of Spain once forced the two to shake hands on the podium), and partly because Lorenzo would be taking a factory seat along side Valentino Rossi at Yamaha (a rider who had always insisted on having beatable teammates). On a championship-winning bike early in a reviled 800cc era that favored the tidiness of 250-style riding,  Lorenzo was walking into the best situation to accurately assess just how good he was.

His presence was felt immediately. He debuted with a pole and second place at MotoGP’s first night race in Qatar, then won just his third time out in Portugal. There were retirements and a learning curve during the year, but it was obvious that Lorenzo was harnessing some of his erratic (fans preferred “impassioned”) tendencies and coming to grips with the big bikes.

2009 was the year he came of age. To that point, only Pedrosa and Casey Stoner had been able to consistently challenge Rossi; podiums in four of the season’s opening five races (including two wins) suggested that Jorge was here to stay.

No place suggested the Italian was under threat better than Barcelona that year. It was arguably the race of the season and one of the better remembered of the 800cc era. Here are the last three laps in Italian – you don’t really need it in English to understand the urgency of the moment. Up to that point in the season, Lorenzo had been leading the championship. This win put Rossi level on points, and Valentino eventually went on to claim another MotoGP title. Lorenzo finished second in both, but a lesson had been learned: “You don’t have to be the fastest one, but the more clever one,” he would tell reporters earlier this year.

It was the worst best-possible situation Yamaha could have: A marketing icon had just scored his seventh world championship and was ably backed by a teammate who had come good as his successor much, much faster than they could have imagined. The press had christened him an “alien” by the end of the year. He was everything they could have dreamed. Except that his teammate hated him, and 2010 was a contract year.

The mindgames Rossi previously saved for Max Biaggi and Sete Gibernau during the 990cc era were in full effect in 2009. At the end of the year, he was already saying Yamaha had to choose between him and Lorenzo for 2011. Rossi sold bikes but was getting longer in the tooth; Lorenzo was the company’s future but didn’t have the universal appeal of his teammate.

While board executives frowned and managers made demands, the tide turned. Despite winning the 2010 opener in Qatar, Rossi injured his wrist at Mugello and sat out four races, watching helplessly as Lorenzo reeled off seven wins in the first ten races of the year and cruised to a dominant 138-point MotoGP championship. It had taken him a mere three years to ascend to the top at a time when the level of riding at the sharp end was untouchably high. 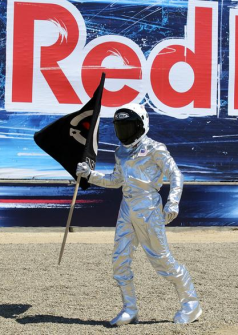 The key to Lorenzo’s success was the opposite of what made Rossi and Casey Stoner so successful: He was smooth and ruthlessly efficient. His pinpoint accuracy and metronome-like consistency meant that he could set nigh-identical times lap after lap despite degrading tires or varying fuel loads. This was especially useful in the 800 era when riding with the front wheel was more effective for most riders than riding “dirt-track” style with the rear wheel guiding.

Only Stoner could consistently make that work, which he did to great effect in 2011; Rossi, meanwhile, struggled irrelevantly in the first of his two years at Ducati. Following a shock decision to retire and struggling with a persistent ankle injury late in the year, Stoner gave way to Lorenzo and his old foe, Dani Pedrosa, as 2012 rolled to a conclusion. Pedrosa was able to dominate the back half of the year, but Lorenzo’s unmatched consistency – two retirements aside, Jorge finished first or second in every single race – allowed him to sneak away with the title for a second time.

It was a formidable run. Lorenzo had won 23 races, scored 59 podiums, taken 25 poles, and claimed two world titles in five years. He had beaten the three best riders of his generation repeatedly. It was a period of immense success. It was also a period.

By now, the name Marc Marquez will be familiar to you, the long-time reader of this website, or you the MotoGP fan, or you the low-level Honda employee, or you the energy drink fan, or you the person living in or near Spain. His was the kind of debut in 2013 that for most of the year had you wondering “how long” rather than “if ever.” Even when his teammate Dani Pedrosa was winning, the conversation revolved around Marquez and Lorenzo, amplified by a last-corner clash at Jerez for second.

It was an evenly matched opening third of the season – each of the three riders took two wins. But the turning point was Germany, where both Lorenzo and Pedrosa sat out due to separate injuries. Marquez won that race… and the next three in succession.

Jorge spent those races getting back to full fitness and competitiveness. He was well recovered enough, in fact, that he won five of the season’s final seven races (and finished second and third in the other two). The performance advantage he’d had at Yamaha from 2008-11 had slowly drifted away from him, and yet he was still at the very sharpest end, moody in his pleas to Yamaha to get a shiftless clutch and brilliant all the same.

He delivered some of his most stirring performances on a bike that was now the lesser of the top two manufacturers. For the final race in Valencia, Lorenzo intentionally tried to hold up the field by riding a second a lap slower than he was capable of just to put other riders between himself and Marquez in an effort to get more points. When no one could manage it, and Marquez’s title looked inevitable, he cleared off for the win.

It was masterful, and meaningless. He hasn’t won since. 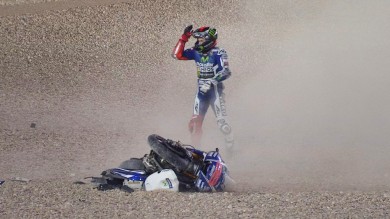 2014 has not been kind to Jorge Lorenzo. After surgery delayed his ability to test over the winter, he began the year crashing out of the Qatar race and finishing tenth in Austin. He surged to the front in Argentina before fading in a battle with Pedrosa late. He was distant in Jerez and Le Mans after strong starts.

Whether it was his fitness or his difficulty adapting to the new Bridgestone tires or the psychological edge of Valentino Rossi’s competitiveness on the other side of the Yamaha garage, one couldn’t say. Maybe it was all of them. But it was not for lack of trying – you could see it in the starts and in his increasingly frustrated post-race interviews.

Mugello could have been a turning point. Lorenzo was near 100% fitness, the bike’s clutchless downshift was finally working for him, and Mugello is a track that favors Yamaha. He got a poor start but hit the front by dropping a surprising Andrea Iannone almost immediately and pulling nearly a second of a lead out on the first lap. He was aggressive and smart, leading 21 of the race’s 23 laps.

And for what? To see Marc Marquez cut under him on the last corner and win by a mere tenth of a second.

Barcelona last weekend was another example of an extraordinary start that came to very little; watching the race gave you nary a glimpse of his lonely run to fourth, such was the intensity of the battle at the front among Marquez, Rossi and Pedrosa. It was a weekend where he was supposed to be closer to a win; it felt farther.

This is Jorge Lorenzo’s predicament: You’re a double world champion at your prime. Up until very recently, maybe even earlier this year, you were the best rider in the world (if not the fastest). You’re not fully healthy and adjusting poorly to new tires and still somehow giving enough to be fourth in the world championship. And no one cares. You have no victories. You have two podiums in seven races. You aren’t owning summer. You’re already talking 2015.

You’re the only person who can keep this from being the time of Marc Marquez. And you’re failing.

Pablo Picasso’s Blue Period ended when he started taking to pink hues in late 1904, eventually christened as the Rose Period. A long career developing cubism would follow; he wasn’t the fastest painter, but he was almost certainly one of the 20th century’s most clever. A quotation that’s stuck with me that I read of his goes something like this:

“We give to form and color all their individual significance, as far as we can see it; in our subjects, we keep the joy of discovery, the pleasure of the unexpected; our subject itself must be a source of interest. But of what use is it to say what we do when everybody can see it if he wants to?”

Jorge Lorenzo is a blessing to a race as a counterpoint to the styles of Marc Marquez or Valentino Rossi or Cal Crutchlow. In his races, you can see the joy of precision, the pleasure of purity; the way he performs every lean and tuck and knee-slide is a source of interest. But of what use is it to say what he does when everybody can see it if they want to?

Trouble is, for now, they don’t.