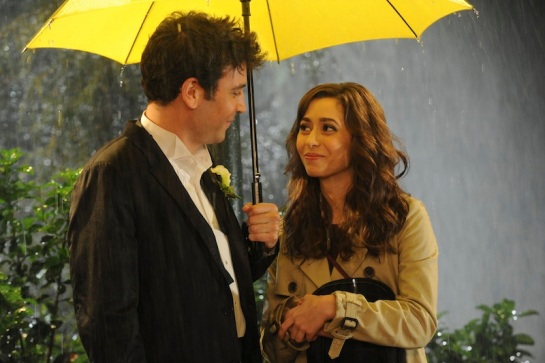 With the invention of Netflix and similar products that allow us to watch serial programming at our own pace, television programs no longer span years. You can binge watch an entire series in a matter of weeks (or, for the truly ambitious, days). Characters are no longer with us for years, but a finite period of time as we condense the viewing experience to fit into our ever-busy schedules.

I’ll be the first to admit to partaking in this practice. I was egregiously late to The Office bandwagon and watched most of the series on Netflix just in time to catch Michael Scott depart from Scranton live (perfect timing). I viewed Breaking Bad on the same streaming device over the course of a single month, as well as countless other guilty-pleasures I’m not confident enough to admit to in this forum.

These services are wonderful inventions which allow us to watch television at our own pace, on our own time. But they transform the viewing experience into a highly impersonal one. When following a show in real time, you become invested in a character over months and years. You take time out of your life once a week to be a part of theirs. How I Met Your Mother was created for this style of prolonged viewing.

The program’s premise can be simply explained by its title. HIMYM follows a hopeless romantic named Ted in his endless pursuit of a woman to marry. But while the identity of the titular mother remains a mystery and acts as the motivating agent that drives the show forward, what has kept me coming back for nine years is the quirky group of friends Ted shares this journey with. This show has always been more about five friends growing old together in New York City than it ever was about the pursuit of love. While HIMYM is always at its best when it pairs a grandiose romantic gesture with an indie rock song that swells at just the right moment, what has made this show a phenomenon is how it seems to welcome every viewer into this group as if they’re one of their own.

This isn’t necessarily a novel insight into this show. But a show that’s predicated on making its viewers feel like one of the gang is experienced differently over the course of nine years rather than nine weeks. The realistic growth of Barney from a philandering playboy into a man writing his own wedding vows is one which realistically takes place over years, not an afternoon. Years ago, I watched Lilly run away to San Francisco, return and make peace with her life, only to have those fears of settling recently creep back. It’s most likely why I was more invested in the finale of this show more than any other. Most often when I’m watching a show’s final act, I’ve only waited for this episode for a matter of weeks. I’ve been anticipating last night’s episode for nine years.

Oh, so I guess I should mention here there are some major spoilers ahead (But if you’re reading an article with How I Met Your Mother in the title the day after the finale and didn’t expect spoilers, then you must be new to this whole Internet thing). 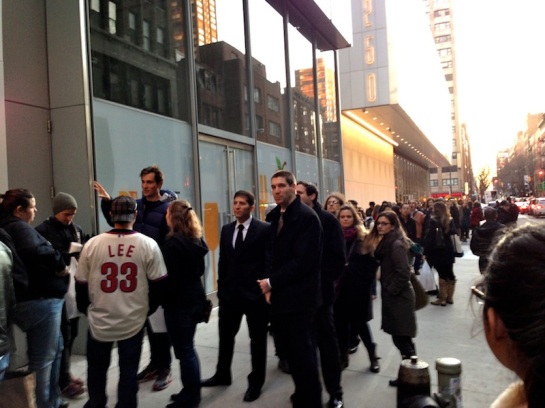 That is a picture of a line of people waiting to get into McGee’s pub in Manhattan last night. McGee’s was made famous in the HIMYM community when it was revealed to be the inspiration for the show’s central watering hole MacLaren’s. It seemed only fitting, for a show that did everything it could to convince its viewers they were peeking into the lives of five real New Yorkers, to try and live in the world of HIMYM one last night. You can visit “fictional” websites like TedMosbyIsAJer.com or read Barney’s blog. You can purchase copies of the Bro Code or the Playbook and even sport your own yellow umbrella. So why not watch the final episode from the gang’s favorite bar? For all I know, Barney Stinson was lurking around the corner trying to seduce inebriated women. I know for a fact that Robin Sparkles was there. 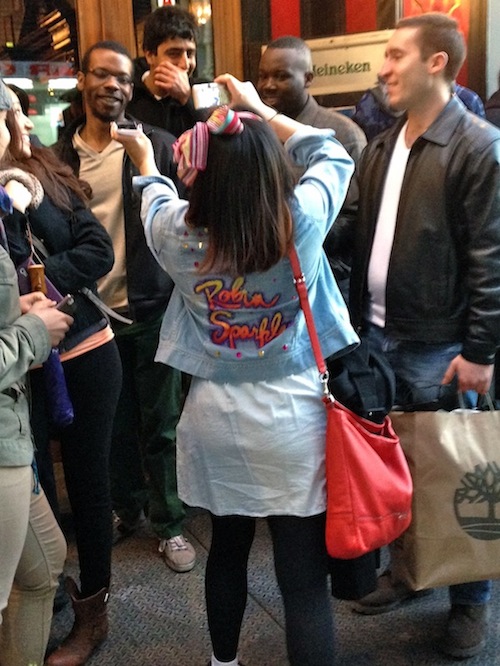 Unlike most of the people in that line, my friends and I got a table. My friend, who organized this entire venture, made a reservation two months in advance (If you haven’t figured out by this point, I’m a little obsessed with this show).

I’d never watched a sitcom in a restaurant before, but with the whole bar dedicated to airing the finale, it was akin to watching an episode performed before a live studio audience. The finale didn’t need a laugh track because it was often masked by the actual laughter that echoed through McGee’s. The awkward silence that followed Barney’s announcement that he and Robin were getting divorced was broken by a guy shouting “What the fuck!?” at the far end of the room.

This show also seemed to jump off the screen in the moments when I most needed it. The episode that took place at the funeral of Marshall’s father aired the week my grandmother passed away and was a cathartic viewing experience I still can’t fully express. I’m not alone in having these experiences, which is why fans waited in a line that stretched around the block to watch its last episode in the closest thing we have to MacLaren’s. It’s why fans adorned Robin Sparkles’ jean jacket and Barney’s ducky tie. We wanted to cling to every tangible relic this show left in our lives when we knew the fiction was ending.

Even when the show dipped in quality in the later seasons, I always stuck with it. It always made sense to me. The early seasons were mostly propelled by Ted’s search for love and were centered on the titular conflict of finding the mother. But as the show was renewed season after season, the creators needed to stretch Ted’s search for love and ultimately needed filler stories to bridge the gaps between the episodes that brought us closer to unraveling the mother’s identity.

But HIMYM has proven it can churn out heartwarming endings as easily as “bro” puns. Several times over recent seasons, episodes have stumbled through awkward jokes and plot lines that failed to captivate, but in the final minutes, the writers always seem to stick the landing and tie it all together with a lovely monologue by older Ted about love and life. It’s that reason why I had high hopes for the series finale. HIMYM started off strong, stumbled in the middle, but surely would nail the finale.

When the screen went black and the credits rolled for the final time, all everyone wanted to talk about was the final twist. The mother was dead, but Ted was no less a romantic. The final shot we see was a callback to the show’s pilot, Ted standing outside Robin’s apartment, holding the blue French horn. It was sweet and sappy and everything I’ve come to love about this show. But it also changed the stakes. It’s not so much the story of how Ted met The Mother, but the story of Ted asking his kids’ permission to ask out his best friend’s ex-wife.

What’s worse is this ending makes every filler episode that much harder to swallow. If this show is now meant to be the tale of how Ted met his how deceased wife, why is he wasting time telling stories that don’t bring us any closer to the love of his life? The love of Ted’s life is gone and when he tells the story of how me met her, he includes minutia about every aspect of his life except his wife.

That final twist devalued The Mother, because while her relationship with Ted was a once in a lifetime romance, it ultimately becomes just a long pit stop on Ted’s ultimate journey to Robin. For a show that captivated audiences with twists and turns and misdirection that were unprecedented for a sitcom, I can’t help but feel the show gave us one twist too many. I straight forward ending may have suited this zany program best.

As I had more time to reflect on the finale, I wasn’t solely disappointed. While I can’t reconcile the resolution regarding The Mother, what struck me as most meaningful was the realistic progression of the friendships as the show jumped ahead, year after year. Robin traveled the world for her job. Marshall and Lilly were consumed by their children, as were Ted and Tracy (okay, that’s weird to write, can we just call her The Mother?). The gang was no longer hanging out at their favorite bar night after night. They slowly grew apart, separated by geography and commitments to families and jobs.

I’m not nearly old enough to have experienced the phenomenon first hand, but it definitely was an honest ending to a show that wasn’t afraid to fly in the face of sitcom tradition and give us real life with a laugh track underneath. In that vein, it may have been the perfect way for this show to end, to remind us that space will grow between old friends, but they will always be there for the biggest moments, just like this show has been there for me.

It’s sad to see a show that meant so much to me for the last nine years end. There’s now a little less to look forward to on Monday nights. But I’ll always have the inside jokes, the catch phrases, and memory of the night I watched How I Met Your Mother at McGee’s. And if I ever miss the show too much, I can always watch it again on Netflix.