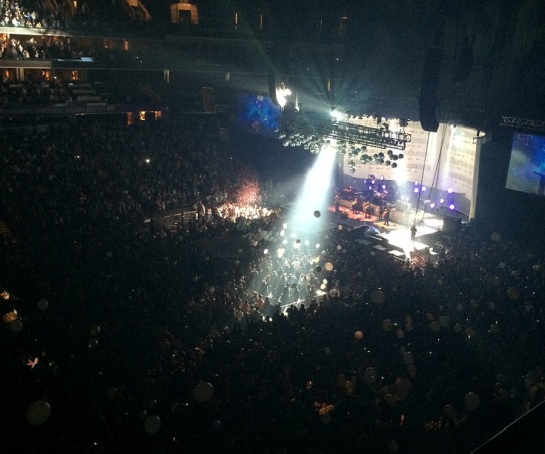 Given that I’ve already established my adoration of the Avett Brothers in a long-winded review of their latest album, I will try to spare you, the reader, the sentimentality of the occasion and most of the background on why I would choose to go there for my New Year’s Eve over other, arguably more festive events. By my count, this was the seventh Avett show I’ve been to in my life, starting with their Saturday afternoon set at Bonnaroo in 2010, but it was the first time I had ever seen them in their home territory, North Carolina. It has happened to work out that when I have come home for the summers in between academic years in New York, the Avetts, who hail from Concord, have usually been on the festival circuit.

Following a New Year’s Eve dinner at the Cheesecake Factory in Charlotte, we headed to the Time Warner Cable arena (colloquially referred to as “the Cable Box”), relaxed in the knowledge that the opener, a husband-and-wife duo called Shovels and Rope, had just started. Parking was a slight hassle, but that was to be expected in uptown on this night. As we walked into the arena and toward our second-deck seats, we noticed that the staff at Time Warner were all wearing Santa hats and greeting everyone quite heartily. Surely this was the largest crowd the arena had seen since basketball season began, although the Bobcats do sit in a playoff spot as of now in the historically bad Eastern Conference.

After Shovels and Rope’s set came to a conclusion, the stage crew set to work on trading the opener’s equipment for the Avetts’. During that setbreak, a gigantic decorative disco ball, the largest one of several hanging over the stage, ripped off its wire and fell through the stage, fortunately missing any potential victims and giving everyone a nervous laugh. After a period of deliberation and much head-scratching, the crew elected to leave the disco ball in its place, painting an image of absurdity which would carry us from 2013 to the new year.

Playing before a home crowd certainly engenders an exciting, genial atmosphere, and it is especially true of this group, which treats every live performance as if the venue were a fifty-seat club in the basement of a coffeehouse. They want to see each face and make the songs as personal as possible, and playing to an audience in a basketball arena creates a unique challenge with their brand of cavalier showmanship.

The set began a little after 10 p.m., with the Avetts selecting “Open-Ended Life” as the starter for their final show of the year. That led directly into “Live and Die,” the most notable single off the 2012 effort The Carpenter. They got the crowd’s attention immediately, eliciting the stomping and clapping necessary to get the crowd involved, even in the upper deck. An extended stage allowed for in-the-round opportunities when smaller portions of the band broke away to perform, and Scott Avett took full advantage of the length of the extension. On several occasions, he ran to the edge of the stage, high-fiving fans and taking the gifts they bestowed upon him, including a cowboy hat and New Year’s apparel.

“Live and Die” segued seamlessly into “The Fall,” with Joe Kwon’s cello leading the charge. A powerful, full-band rendition of the song had everyone singing along, another staple of the Avett experience. They then slowed the tempo for another cut off The Carpenter, “Down With The Shine,” which, like many of the songs in their arsenal, they had been performing live for some time before they recorded and released it officially. They followed with perhaps the most Catholic secular song ever written, “Shame,” as well as another popular cut from 2007’s Emotionalism, “Paranoia in Bb Major.” 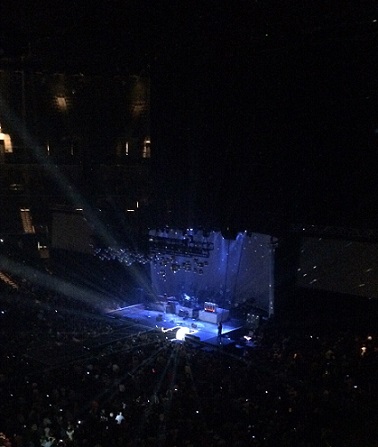 The band expertly mixed older tunes with the most recent selections, and took the crowd through peaks and valleys of intensity, following “Morning Song” with “Pretty Girl From Cedar Lane” and winding through its back catalog with the style and finesse of a Bruce Springsteen concert. The most intimate moments occurred when the brothers would utilize the stage extension for acoustic guitar-only songs, including Scott’s “Murder In The City,” Seth’s “The Ballad of Love and Hate” and the combined effort “Through My Prayers.” A very special time came when the Avetts invited their sister Bonnie and father Jim, a renowned folk musician in his own right, to sing “Old Rugged Cross” with them.

Vocal mastery and harmonic beauty played out, as it often does, through the entirety of the concert, with the mesmerizing staples “Laundry Room” and “Head Full of Doubt/Road Full of Promise” capturing the imagination and full attention of the audience, begging them to listen. The audience was more than willing to oblige, singing along at full volume and raising the spirit of the arena as we hurtled toward midnight.

With about ten minutes left, the band left the stage, and Scott instructed the crowd to talk among itself until midnight. The situation then became strange and somewhat uncertain, as a giant screen behind the stage projected images of hands counting down and clocks striking midnight, but without any order. They were random and repeated themselves routinely, and the only real countdown came when Seth announced, “Six minutes left, y’all.” Around 11:59 p.m., the Avetts stood on the stage and watched the screen above, as if expecting it to tell us when midnight officially struck. When it did not, everyone just started celebrating anyway. Balloons fell from nets suspended in the rafters, and the band launched into a folksy rendition of “Auld Lang Syne.”

The band rounded out its performance on the standard “I and Love and You,” with Scott holding three fingers up at each chorus and imploring the crowd to do the same. The apocalyptic, dreamlike “Life” followed, concluding the set, and the band left the stage. A few minutes passed before the encore, which included the Joe Kwon-led “Go To Sleep,” a cover of John Denver’s “Thank God I’m a Country Boy” and the final closer, “Goodnite, Sweetheart, Goodnite,” with the Avetts adding folk tinges and instrumentation to a doo-wop song from the seminal 50s group The Spaniels.

The Avett Brothers New Year’s Eve concert showcased the best elements of their sound, the harmonies and distinct folk-pop mentality, as well as the progression the group has made since its collaboration with Rick Rubin began in 2009 on I and Love and You. Drums and electric guitars never used to be the focal point of Avett songs, aside from the omnipresent kick drum at Scott’s foot, and now that groups such as Mumford & Sons and the Lumineers have caught up to the Avetts, they see the necessity of staying ahead of the curve.

The evolution has been natural since around the time of the Gleam albums and Emotionalism, but it is harder to make a connection between, say, “I Killed Sally’s Lover” and “Bring Your Love to Me” than it ever was previously. The best groups do this, of course, and have since the 1960s; resting on laurels and putting out similar-sounding two-and-a-half minute singles, the Berry Gordy method, is not the way to leave a sustainable, substantial impact on ears that have too much to hear and too short of an attention span to listen. Retaining their general aesthetic and the authentic, emotional connections they elicit from listeners will always be central to the Avetts’ mission, I imagine, and with the ever-changing tide of pop music hypocritically demanding more of the same, but different, from its top performers, the Avett Brothers will continue to be custodians of Americana and executors of the rich, lush passion inherent to any great live musical experience.