A game winning shot hangs in the air for what always seems like eternity. When it’s your opponent lobbing up a prayer, only when the ball clanks off the rim can you let our a shy of relief that you’ve been holding in longer than you thought. But if the ball falls through that metal cylinder, you experience a sinking feeling in which all hope is lost. The final horn has sounded, and your team is behind on the scoreboard. There’s no last possession. Game over.

But if it’s your guy, your team, which wins on that shot, it’s easily the quickest swing of emotions in the sports watching world. The feeling of hopelessness and disappear immediately evaporates and is replaced with unbridled joy.

For me, the most interesting phenomena about the game winning shot is how the entire course of a game is whittled down to a single shot. A plethora of missed free throws and silly turnovers are forgiven or magnified with the outcome of a single spot-up jumper.

Sports fans, including myself, are easily distracted by what happens last. The lingering image of a game winning shot trumps the totality of events that led up to that final moment. It’s the same way we harp of a “crucial” missed free throw at the end of a close game, while ignoring players who missed the same gimmies in the first quarter. The shots are worth the same, but when a player missed one in the fourth quarter, it’s magnified in our minds. What happens last is most easily remembered and seems to define the entire course of a game, for better or for worse.

Which seems destined to define how this experiment of searching for an NBA team will likely play out. I may flirt with different teams, vacation in different fandoms each week to find a team I can root for. But, in the end, it might just be the team which wins my heart at the very end that I choose.

Damian Lillard is on another planet right now. After watching Lillard hit two game winning shots in a one-week span, you could easily convince me right now he’s employed the same technology used by the Monstars to harvest the talents of multiple NBA players. He’s otherworldly.

Having a playmaker like Lillard sets a team apart, not just on the stat sheet or on the scoreboard, but in pure entertainment factor. Lillard can take over games, the abstract concept that basically means, when this dude is playing at his best, there’s no one who can stop him.

I always have a soft spot for a dynamic point guard, and Lillard is as dynamic as they come. He’s Derrick Rose before the knee injury. He’s AI before his fall from grace. He’s must watch television. Lillard is the type of guy you receive texts about from your friends, pleading with you to turn off Grey’s Anatomy and watch an innocuous Blazers game, just to see more of Lillard’s highlight reel play.

Seriously, if somebody signs Shaq to a one-year deal, they’re my team. End of discussion. Hell, give him a one day contract. Whatever. I just need the Big Aristotle back on the hardcourt one more time.

OUT OF THE GAME BUT STILL AWESOME

Let’s get real. I’m not going to be a Heat fan, but God they make it so tempting. First, how can you resist buying this jersey?

That is the greatest combination of hipster and chic the NBA has ever provided the earth. Shuttlesworth for life!

But more importantly, denying ourselves the chance to root for LeBron in his prime should be a felony offense. The dude isn’t a man among boys, he’s a man dunking on preschoolers who are still using a Fisher Price basketball hoop.

There are other greats playing today, such as Durant and Duncan. There are other players that when they’re in the zone, you need to flip to that channel, like Steph Curry and a healthy D-Rose. But James is much-watch television every time he’s on the court. He can out-rebound the best centers, drive to the rim with the best of them and has some of the best touch from beyond the arc. Plus, when he’s off the court, he’s a total goofball. This is his profile picture on his Google Plus page: 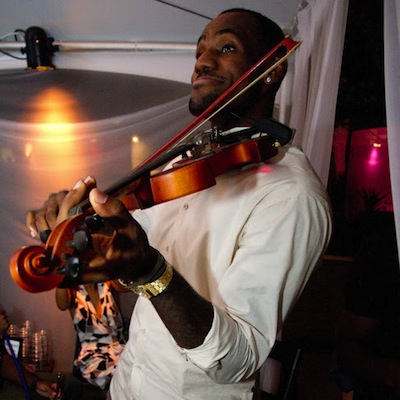 I didn’t know Google Plus was still a thing, but LeBron is crushing that too. And of course he’s playing a violin. Why wouldn’t he play a violin? He’s KING JAMES.

It seems like every year, there’s some new basketball prodigy that every scout claims is a must-get. This summer, all the college basketball world could talk about was Andrew Wiggins. Hell, it seemed like half the NBA gave up on this season over the summer for a shot at the #1 draft choice. But Wiggins has looked pedestrian in the college ranks. LeBron is still a demigod.

I think we forget how much hype was on LeBron before he hit the NBA. His high school games were nationally-televised events. Then he came to the NBA, and nothing changed. Love him or hate him, every fan was glued to the television the night of The Decision to see if the rumors were true that James was headed to Miami.

No one in the NBA can evoke this type of response from the collective NBA fan base. And while it seems I won’t be actively rooting on the King any time soon, it seems only necessary I find a way to enjoy his reign before it comes to an end.