With Saturday’s 6-3 home victory over league-leading Arsenal, the Manchester City Football Club now sits at third in the Barclays Premier League table, with 32 points. City, as the team is colloquially called by admirers and detractors alike, is in exceptional form as of late: earlier in the week, the team defeated defending UEFA Champions League winners Bayern Munich in a come-from-behind 3-2 victory in Bavaria. Even more surprising than all of this, however, may be the state of Manchester City’s biggest and closest rivals, Manchester United. By far the most successful team in Premier League history, United is under the direction of a manager not named Sir Alex Ferguson for the first time since 1986, and the team is firmly in the middle of the table, a full ten points behind its cross-town rivals. People are already calling for the head of Ferguson’s successor on a plate, and the tide in Manchester is facing a Lakers/Clippers-like shift for the first time ever.

Perhaps more than any other team, Manchester United has represented English soccer from both a domestic and an international standpoint. Since the inception of the English Premier League system in 1992, United has been by far the most successful club, with thirteen overall league titles to its credit. Even prior to the implementation of the EPL, the Red Devils dominated the English soccer conscience for much of the twentieth century, creating national and British Isle heroes such as Matt Busby, Denis Law, Bobby Charlton and George Best (who earned the Belfast idiom, of which there are several incarnations, “Maradona good, Pelé better, George Best”). United was responsible for many important advancements in English soccer with regard to international competition; the 1968 edition was the first English club and second British team, after Scotland’s Celtic, to win the European Cup, often considered the most competitive and important international club competition.

Without question, the most important managerial face in English soccer over the last 25 years, and possibly ever, has been the Scottish wizard Sir Alex Ferguson, who took over United during a somewhat rare down period in November 1986. During his reign, which finally concluded earlier this year following the club’s twentieth English league triumph, Manchester United took itself and English club soccer to heretofore unseen heights, with the peak coming during the 1998-’99 season in which the team became the first English club to win a treble of three trophies. Propelled by one of the best generations of teammates ever, United won the Premier League, the FA Cup and, in historically dramatic fashion, the UEFA Champions League.

Lost in all of this success, of course, was Manchester City. Like any great one-city-two-team duality, there had to be a group of losers, and Manchester City was that. The club, founded two years after Manchester United in 1880, enjoyed some early domestic successes and maintained relevance but always stood in the shadow of its prominent neighbor (to put this dichotomy into some digital perspective, Manchester United’s history is broken into three distinct Wikipedia pages, whereas City has but one). City won its second English title in 1968, the year United won its first European title. It was almost as if United was throwing City a bone but dousing it in vinegar first, knowing the Blues were hungry enough that they would eat it anyway, all the while indulging in a three-course feast of European delicacies. This is what sitting at the table of English football was like.

City reached its low point in 1998, as the team found itself relegated to English soccer’s third division. As United fans had always held, City were shite, and it was now truer than ever, much to the constant chagrin of blue Mancunians. The repressed working classes of a factory city had always looked to football as the way out, the light in a long and seemingly endless tunnel of darkness. For half of the city, for the City city, that light had burnt out in a whisper of smoke and Britpop.

New management returned the team to the first tier, yet City continued to struggle until an ownership group from Abu Dhabi acquired the team. Immediately, money went into the club, and players such as Carlos Tévez, Mario Balotelli and the Touré brothers ushered in a renewed sense of hope for the blues. Results came with them: in the 2011 FA Cup semi-finals, City defeated United to advance to its first final since 1981, which it won 1-0 over Stoke City. Not to be outdone, Wayne Rooney notched what many consider to be the finest goal ever scored at Old Trafford, a venue which has seen more than its fair share of excellence, against City, which gave United a 2-1 victory. That July, City made perhaps its most important signing in history, bringing Argentine scoring genius Sergio Agüero over from Spanish side Atlético Madrid. The Manchester arms race had begun with a salvo from the upstarts.

The 2011-’12 Premier League season played out like a chess match, as both Ferguson and City boss Roberto Mancini guided their sides around and through the Arsenals, Chelseas and Liverpools of the world to make Manchester the singular epicenter of footballing majesty. A match in late October 2011 signified the shift and that City was not to be taken for granted, as it throttled its rivals 6-1 to take a 5-point lead in the standings. Ferguson referred to it as his “worst-ever day” as United’s manager, which surely delighted many of the oft-melancholy City supporters. United hung steady with City throughout the season, leading by a considerable margin at one point before stumbling to allow City back into the race. City even managed to draw back even in the table by the time of the final match day of the season, May 13, 2012, which played out like golden cinema.

In the English language, and probably in any language, there are not sufficient words to properly convey the cavalcade of emotion and drama on that day. It almost eerily mirrored the 1999 Champions League final, if not for the reliance on outside circumstance. Here are the facts: City and United were level in the table at 86 points apiece going into the day, with City’s goal differential, the first tiebreaker, larger than United’s. United plays and defeats Sunderland 1-0 on a Rooney goal, with City’s game against Queens Park Rangers playing out simultaneously. At the time of the United victory, City is down 2-1 to a team which would be relegated going into extra time. What happens next, and how the 2011-’12 EPL season finished, has already gone down as the most improbable set of events in the history of English domestic soccer: 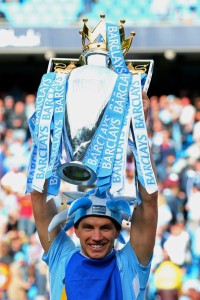 Like United’s Ole Gunnar Solskjær, City’s Edin Džeko acted as the super sub, scoring an equalizer with no time to celebrate. As he had all season, Agüero came through for City, courtesy of Mario Balotelli’s only-ever Premier League assist. Really, he only needed that one anyway. City won the title on goal difference. United fans, of course, were in shock. Finally, for the first time since 1968, City were champions, and the tides of Manchester had turned their way, at least for a precious moment.

In 2012-’13, Ferguson was determined not to abdicate his throne without a final triumph. In true Fergie fashion, United displayed total dominance of the Premiership and won the title handily, a full 11 points ahead of runners-up City by the end of the season. With that, the Ferguson era had come to a close, and City fans were more than pleased to see him go. Everton manager David Moyes, Ferguson’s countryman and a manager who had enjoyed considerable success with mid-tier dwellers Everton, stepped into Fergie’s size-

Thus far, the switch has been tumultuous: through fifteen matches, United has won six, drawn four and lost five. City, meanwhile, have won ten, drawn two and lost four through sixteen matches under Mancini’s replacement Manuel Pellegrini. The idea that United fans will continue to back Moyes is becoming harder to believe in the long-term; a fan in Kenya, in fact, reportedly killed himself following United’s second home loss in four days last week, to Newcastle, which had not beaten United at Old Trafford since 1972. It is really tough to equate this to American sports in some capacity. Even after the New York Yankees missed the playoffs for only the second time in nineteen years this season, there were no reports of fans in the Bronx, or elsewhere, jumping out of their flats onto the cracked pavement, let alone after getting swept at home by the Padres in the middle of May.

By virtue of its transition, it appears that United may be on its way to a long-overdue period of relative decline, while City has all the weapons (and, if we’re being honest, oil money) to hold its relevance for some time. European soccer is becoming less about club and community than about finding enough streams of money to finance the purchases of top-quality players. Many top clubs in Europe, including Real Madrid, Chelsea, Liverpool, Barcelona, A.S. Roma and Arsenal, have amassed impossible amounts of debt, all for the glory of its members and fans via trophies. City has joined the elite spenders, and it may now be the case that it can challenge in its one remaining area of perpetual struggle: Europe. Mancini faced criticism from fans for not being able to translate domestic success to European relevance, but now Pellegrini may have unlocked the key to City’s chemistry, which was on display in a come-from-behind victory on December 10 against reigning European conquerors Munich, who have the brilliant Pep Guardiola acting as administrator of rage and superiority. Though United won its qualifying group and will also be in the draw, it seems that City has staked its claim in United’s territory again. Depending on how the next few seasons go, it could be that the skies of Manchester will carry a particular hue of blue onto the pitch and into the hearts of its longest-suffering half.