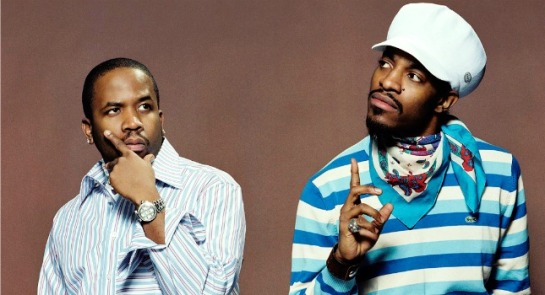 With news breaking this week that OutKast will embark on a tour starting at Coachella in 2014 for the first time in a decade, the music community, hip-hop in particular, is already trembling with excitement. These bastions of southern rap have done enough separately to keep things interesting since the 2003 release of Speakerboxxx/The Love Below (or the 2006 release of Idlewild, depending on who you ask), but even if they hadn’t it would still be a monumental reunion by any standards. We at Tuesdays With Horry are just as excited as everyone else, so a few of us discussed what this means from a personal or macro standpoint.

Tyler Lauletta: Being raised on Classic Rock and Motown, too many times in my life I have fallen in love with artists whose touring careers were over. Sometimes it was justifiable; John Lennon was shot before I was born, Kurt Cobain died before I smelled teen spirit for the first time, Michael Jackson was white before I ever knew he was black. Knowing that I would never get to see these artists perform live was a difficult reality for young Tyler to face. It was like some sort of cosmic joke.

From then through about 2004, OutKast was everywhere, and it was really exciting. Their unique take on classic funk stylings and pulsating rhymes combated against gangsta rap and hip-hop softness following the deaths of Tupac Shakur and the Notorious B.I.G. André “3000” Benjamin is full of vibrant energy and an incredible drive to inspire joy through it, and Antwan “Big Boi” Patton is his perfect foil. They had a unique mix of fervent, train-careening-off-the-tracks speed and poignant lyrics which dismantled the hip-hop construct and pieced it back together as something more beautifully astounding than anyone had ever envisioned.

I received Speakerboxxx/The Love Below for Christmas sometime in the mid-2000s, and it is still magic. “Hey Ya,” of course, is almost annoyingly ubiquitous, save for the fact that it is a brilliant piece of hip-pop showmanship on André 3000’s part, and the video, which features André as every character in an Ed Sullivan Show takeoff, is equally spellbinding. The fact that the record is almost entirely split made it almost unfair: on one album, two geniuses are able to showcase what makes them great and still be able to receive help from the other one when appropriate. “Roses” is another classic which would not have been the same without André’s hook. “Good Day, Good Sir” is classic hip-hop skit filler, a hilarious modern take on Abbott and Costello’s “Who’s on First?” back-and-forth with a subtle enough hint of antiquity to undermine any notion of its earnestness. In moments of these, OutKast reveals its true character.

One has to wonder if OutKast could ever even really produce a follow-up great enough to belong in its esteemed canon, and whether that question has been part of what’s kept the two apart for such a long time. The smattering of singles from each party and the well-received Big Boi solo effort Sir Lucious Left Foot: The Son of Chico Dusty certainly point to plenty left in the tank for the pair, and either way the world will warmly welcome OutKast’s return to the stage because of how much fun it always looks like they are having. Each of these guys is an artist in his own right, and together they create a kaleidoscope of attitude and astute sensibility which does not so much go against the established grain as it does create a grain all its own. We should all be thankful it was an amicable hiatus but much, much more so that the hiatus is finally, mercifully finished.