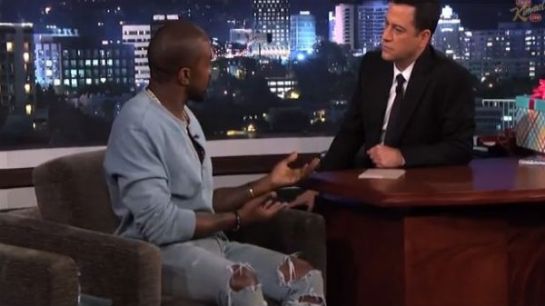 It’s easy to see Kanye West as a caricature of himself. He’s arrogant, abrasive, married to not only a Kardashian but the Kardashian… basically, he makes it pretty simple. But people who only see Kanye on this level are missing out. It’s hard to take someone who’s always calling himself a genius seriously, but if you listen… Kanye actually is a genius. He’s musically brilliant and maybe a bit of a ridiculous person, but he’s also fucking smart too. Case in point: his interview on Jimmy Kimmel. If you missed out on the epic twitter battle, here’s the rundown: Kimmel spoofed an interview Kanye did in the UK, using a couple of kids and a couple of milkshakes to recreate it. For whatever reason, Kanye really did not take kindly to this, and went on a hilarious and insane twitter rant insulting Kimmel. A few weeks later, Kimmel had Kanye on the show so they could prove they’d kissed and made up. What resulted was basically a giant therapy session and it was fucking brilliant:

First of all, let’s talk about how most of the time, when the audience laughs at stuff that Kanye says, it feels suuuuper awkward because he’s definitely not trying to be funny. Also after he blew up at Jimmy Kimmel it feels almost like you have to walk on eggshells around him. You never know what you can laugh at and what will make him fly off the handle.

Secondly, the quote “I don’t follow the rules of like, normal celebrities,” is perhaps the most Kanye quote to ever exist. But also like, true. He is in his own category. And whether that’s because other people put him there or he puts himself there doesn’t matter. The thing that can make Kanye kind of a caricature is that he takes himself so seriously, but he kind of can because he’s that good.

It’s kind of weird when you hear Jimmy Kimmel talking about how he always tries to convince people that Kanye’s not a jerk because… it seems kind of true. This entire interview shows that yeah, maybe Kanye has an inflated sense of self but he’s just honest, not a bad person. Honestly, after all the shit he put on twitter I was very impressed that he went on Kimmel and basically said that he overreacted and took out all of his anger towards other tabloids and paparazzi on Jimmy. He basically insinuated that it was unwarranted, which I feel like is as close to an apology you’ll get from Kanye. He doesn’t strike me as a guy who apologizes for a lot, but it felt like he kind of did, here.

This is all just so fucking Kanye and there’s no other way to put it. “I’m a creative genius, and there’s no other way to word it.” Like, that’s ridiculous for someone to say. And Kanye so obviously, one hundred percent believes that about himself that it should be laughable but it’s not, really. Like… you kind of believe him too. And weirdly, what he says here makes him more likable because he talks so much about following “dreams” and about making a positive change in the world and he is really very earnest about that, and it’s kind of endearing. Then he goes on to acknowledge that he’s weird, and crazy, and he says inappropriate stuff sometimes, and just generally demonstrates a high level of self-awareness which makes all of his ridiculousness seem just a little less ridiculous.

One not-endearing or self-aware moment in this clip: Kim Kardashian absolutely should not have a star on the walk of fame.

Josh Groban Sings Kanye West’s Tweets is still one of the greatest late-night sketches ever.

Kanye is also very relatable here, because admit it, we’ve all sat in our bedrooms laughing hysterically at ourselves while drafting what we thought were hilarious tweets before.

This is where you really see how smart Kanye actually is, and how great his understanding of the world is. Setting aside the true ridiculousness of leather jogging pants, so much what he says about classism in the fashion and celebrity world is so enlightening. As like, normal every day human beings, you tend not to think about there being a hierarchy in the world of celebrity, but to hear Kanye tell it, there is. And it really doesn’t make sense that he doesn’t get a shot because he’s fucking Kanye West. He’s kind of endearing here again when he says “all we care about is making awesome stuff” because regardless of how ridiculous so much of what he says is, you can just tell that he means this. That his focus really is just making shit he thinks is really cool and sharing it with the world. And the world thinks his shit is pretty cool, too, so it works out.

All right, let’s sift through this shit, because there’s a lot going on here, and I’m not quite sure how all of it is relevant. He talks about standing up to drug dealers in Chicago, which okay, interesting. He also talks about not buying into the media narrative that perpetuates low self-esteem and discourages us from following our dreams, and I think this is just one of the most brilliant moments because it seems evident that Kanye doesn’t create for fame or money or glory, but he creates because he wants to and he needs to. He wants to make awesome stuff and share it with the world, and we’ll take it Kanye!

I’m not quite sure about the whole thing about $4,000 phones and luxury being your family and stuff, but okay. Or the whole thing about education. And he compared himself to Jesus again, but actually this time you kind of get where he’s coming from. It’s not that he thinks he’s like Jesus, it’s that one day he wants to be able to say he had the same impact as Jesus. Which is still… I mean, shoot for the moon, kid.

The rest of the interview is basically an outlet for Kanye to bitch about the paparazzi, which, I mean… Kim Kardashian is your babymama.

So I’m not sure what my entire point was here. I guess basically that this interview was brilliant because for me, it brought Kanye back to earth. It’s so easy to say how ridiculous he is, how he’s crazy and always saying all these wild things about himself, but there’s just a certain level of earnestness in this interview that makes it all acceptable. He comes across as a guy that is rather self-aware, that understands people think he’s ridiculous, but just doesn’t care, because all he’s here to do is create music and things that people enjoy and as long as people are enjoying it, fuck the haters. It’s clear that his opinions are very well-thought-out and he’s a smart guy, and I’m sure he’d be pleased as fuck that I’m using the word “enlightening” to describe this interview.

[If you find me (or Kanye) incomprehensible, my apologies. I just wanted to talk about this interview forever and ever.]