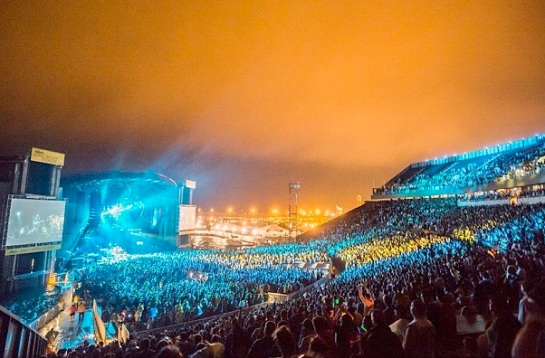 On the night of July 12, 2013, four of my friends (I’m not typically one to name names, but for the purposes of this piece and clarity, it seems necessary: Laura, Tommy, Mike and Ray) and I met in Brooklyn, packed into Ray’s black Hyundai and departed the five boroughs. Our destination lay on the South Shore of Long Island, around forty miles and an hour outside of the city. We were to meet another one of my friends, Conor, at the Nikon at Jones Beach Theater in Wantagh for what was to be a concert event of the summer, for all the right and wrong reasons. Phish, the legendary genre-disregarding jam band which has been pounding the musical pavement for thirty years, was to perform that night, and if every other Phish show was any indication, it was going to be a night to remember. And so it was.

We had heard all day that there was a chance of rain that night, but being that the city was at the end of its hottest week of the year up to that point, we figured it would be a welcome cool-down period if and when a system came in off the coast. If you have ever had the displeasure of experiencing Friday afternoon rush hour traffic leaving New York City, you know it can be a test of willpower not to exit your parked car in the middle of the highway and start brawling with every person who lay between you and your destination. Add rain into the equation, and everyone suddenly forgets that we have reached a point in modern technology in which cars have the capability to go faster than ten miles per hour (or around 16 kph, for all you recent Anglophiles). We left later than we wanted, the weather turned sour and we knew we were in for a longer night than we had hoped, even by Phish standards.

Ray’s Hyundai arrived at the arena about 45 minutes into the show, which we knew because Mike (by far the biggest Phan among us; he had been to every concert on the 30th Anniversary Summer Tour up to that point, save one the previous Sunday) was constantly updating us via his Twitter. Ray and I were extremely disappointed to have missed the opener, “Chalk Dust Torture,” which had been part of both of our concert wishlists for the evening. As we walked up to the entrance, I tried to locate Conor as best I could, but my phone was acting up, and I hadn’t brought a plastic sandwich bag to act as a makeshift waterproof case.

It was around this time that I realized my summer concert record with weather: out of five outdoor shows I had attended to that point, four of them had been in the rain: both nights of Dave Matthews Band at the Saratoga Performing Arts Center, although the second night was much more moderate than the first; the mudfest 2013 that had been the Governor’s Ball NYC Music Festival, with Friday’s rain creating enough issues to more than make up for the mild radiance of Saturday and Sunday; the other show I had seen at Jones Beach, another DMB concert, which was comparatively not at all imposing weather-wise; and now, the highly-anticipated Phish concert, one in which I had personally twisted the arms of most of the people involved into going. The only concert at which it had not rained was the free B.B. King show. Basically the lesson here is this: DO NOT pay to go to an outdoor concert with me. Anyway, I sent out one or two monosyllabic text messages before he called me, and we met along the fence. Laura had to check her umbrella before entering the arena, which seemed like an absolutely ridiculous notion given the monsoon-like conditions we were facing, but such is the nature of concert-going in this millennium.

The band had just wrapped up a delightful jam when we finally got inside Nikon Theater. We could hear the voice of keyboardist Page McConnell talking to the audience, trying to make sure everyone was doing alright. “That’s enough, Page,” Mike said. “Just get to the music already.” We reached a covered area, and five of us decided to stand in the stairwell leading to the first level and what were not actually our seats rather than continue to test Mother Nature. We looked around, took a head count and came to a startling realization sometime in the middle of “Sugar Shack.”

We had lost Tommy.

This was not going to work. We figured he was making his way to our actual seats, which were actually in section 24, and we were somewhere around section 9L or so. To be at your first Phish concert alone and in the rain, surrounded by a crowd of tie-dyed ex-Deadheads and happily captivated Phans hoping to hear the entirety of the Gamehendge suite, complete with narration, probably did not leave a great first impression. Ray threw over his hood and set out to find him, leaving us down to four. Conor and I walked up to the viewing area just long enough to witness the absolute peak of a positively incendiary rendition of “46 Days” (“Leigh Fordham sold me out” – HOLLA AT YA BOI!) before retreating back into the relative comfort and warmth of the tunnel. At this point, standing drenched in some of the harshest rain we had endured this summer, Conor said, “You better write about this in your fucking blog.” So here we are.

Even under such trying conditions, it is remarkable to see the resilience of Phans and their relentless, borderline unconditional love for the band. These people define loyalty, especially the ones who set out following them on tour in hopes of hearing a song not played since 1993 or perhaps an out-of-the-blue cover (“The Gambler” with Kenny Rogers at Bonnaroo 2012 comes to mind). The joy with which they embrace any adversity is perhaps unparalleled in terms of single-band concerts; it happens at large festivals, but usually only out of necessity because people are camping, or they have paid $280 for a three-day pass and want to get the most out of it, or whatever the circumstances may be. In the grand scheme of live music fandom, Phans are unique for a variety of reasons, and each has a story to tell from a previous Phish concert, whether it is about the music or about the other Phans they encountered. Their backgrounds are as varied as the setlists they have experienced, and, more often than not, they are incredibly amiable and willing to discuss the finer points of a Trey Anastasio guitar solo or Jon Fishman’s dress.

Beyond that, a Phish concert is incredible because of the way the band feeds off of the crowd. It is rare, especially in an age where “art” is being continually redefined to seemingly take the pure delight out of it and replace it with various brands of weird, painful rage, to see a band having so much goofy, lighthearted fun in front of so many people. There are only a handful of groups which retain a sense of fun (phun?) to accompany a technical mastery of their crafts. At the Jones Beach concert, with the sky opening wide and dumping gallons of water on each concertgoer’s head per minute, Phish crafted a setlist based on songs mentioning or about water. You cannot help but smile and commend them for that, forgetting for a moment that you are carrying twice your body weight in wet clothing.

As we waited in the tunnel, the people around us got increasingly antsy and agitated. “I came out to see a good Phish show,” one passerby said toward the end of the first set, “And now I’m getting ‘Backwards Down The Number Line?’ This is some bullshit!” For the most part, though, everyone understood that there was nothing to be done and simply enjoyed the music ricocheting off the concrete staircases and echoing down the tunnel. Sometime in between a frolicking “Reba” and dynamite “David Bowie,” Ray returned with Tommy, and there was much rejoicing. Mike broke from us to meet his roommates, telling us he would catch us back at the car after the show ended. Tommy, Ray, Conor, Laura and I went down to a room next to the staircase which, curiously, was much warmer than any other area. It would later be referred to in group text messages as “the warm place,” and that is where we started the second set after obtaining the last pretzels at a pretzel stand. We find happiness in the little victories in life.

It was around then, in between sets, that the rain started to let up a little bit. Conor and I climbed out of the stairwell in time to catch the end of a cover of the Velvet Underground’s “Rock & Roll” and see the always-satisfactory “2001,” the Phish pseudo-cover of Richard Strauss’s “Also Sprach Zarathustra,” the theme from 2001: A Space Odyssey. At this point we first witnessed the Trey face during a guitar solo, a standard equalizer of the Phish experience. I grabbed Ray from the warm place for a fantastic run through “Tweezer,” and we stayed within sight of the stage for an electrifying “Cities,” “The Wedge,” a particularly enthralling “Wading In The Velvet Sea” and “Character Zero,” which closed the second set.

As far as large-scale concerts go, it is rare for a band not to have an encore. Phish did not disappoint, tearing through “Sleeping Monkey” before seamlessly transitioning back into “Tweezer Reprise” before anyone really knew what had even happened. The peak of “Tweezer Reprise” matched any previous high we had seen, and the legendary Phish light show which accompanied it sent vibrant palpitations through the hearts of everyone lucky enough to see it. With that, Phish had finished.

Conor took a train back to his home on Long Island, and Mike found us back at the Hyundai, having thoroughly enjoyed the second set (“One of the best second sets I’ve ever seen; it’s definitely in the vault for me”). The anomaly of Jones Beach on this night was that, even with so many people entering and leaving through very few places in cars, traffic was not bad at all. It was a kind of numbness after the concert to drive back to Brooklyn, each of us doing our best to drip too much water onto anyone else. Tired, hungry and musically satiated, we left Phish and Jones Beach having had our fill of concerts, music and, certainly, rain. At least until the next one.

Anyone for Atlantic City? It will be indoors, I promise.