Don Draper looks up at the dilapidated, Victorian home that Bobby describes as being in a “bad neighborhood” to which Don replies, “This is where I grew up.” It’s a glimpse of Don coming clean with the demons of his past and letting his children know who he really is. Sally turns to her father, but, unbeknownst to her, it’s Dick Whitman staring back, not the man she caught with his pants down.

Season 5 of Mad Men ended with a shot of Don, in a bar alone, much like how the pilot episode, “Smoke In Your Eyes,” started. But instead of a bartender approaching him, it’s a young blonde woman who asks, “Are you alone?” The scene cut to black as Nancy Sinatra crooned in the background. For some, this served as fodder for “DRAPER BACK,” and people were salivating about an upcoming season where Don went back to being, well, Don. They wanted the man who was responsible for “The Carousel” without the addiction to alcohol. Or the guy who auditioned to Hilton while sleeping around behind his wife’s back. Instead, viewers were treated to the same man’s problems without any charm that served as sort of a justification for the band aids of drink and women which temporarily covered up the hatchet wound left by his upbringing. During Season Six, it seemed like the floor at Sterling Cooper & Partners had finally disappeared beneath Don’s feet, letting him fall until he ended up, not in an armoire, but a drunk tank. It was a sulking, bloated and disgusting Don Draper.

Minor characters were becoming more and more fleshed out while Don snuck downstairs with Mrs. Sylvia Rosen to have discussions about Dante’s Inferno. Joan wanted to feel like a partner rather than a secretary who was only in the room because the company sold her to Jaguar. Pete lost his grip on his family and his role in the office. Peggy started living life as a gentrification pioneer only to be labeled as a conservative reactionary who has feelings for Ted “Deal With It” Chaough. Yet one thing remained constant in each subplot: the main protagonist shows up like a bull in a china shop and smashes everything in sight. Don made a turn from protagonist to antagonist. He was getting in the way of everyone else because of what was going on at home, which is what led to the decision made by the elder partners at SC&P during the funereal meeting where Don is told to have a seat. No, there’s not another merger taking place. Just the agency telling Don to take a leave of absence to re-group with an indefinite timeline for return. It was like watching Freddie Rumsen get the boot all over again. Now, it’s Don who’s soiled himself when he’s supposed to be at a client meeting. He’s asked to leave while Peggy makes herself comfortable in his chair. PEGGY BACK?!

Don’s descent this season was set to the sirens on the New York streets below. 1968 was a loud, volatile time in America. Dr. Martin Luther King Jr. and Bobby Kennedy were assassinated, racial tension was growing, the ’68 DNC was a disaster and the “silent majority” was at home shaking their head in disgust. The working professionals on Madison Avenue were coming face to face with a world that could not be blocked out with media research or a clever strategy to sell radios. Vietnam was in their work place, and it made doing business with Dow Chemical a little more complicated to people like Michael Ginsberg. There was no separation between business and politics; they’re intertwined. But don’t tell that to the future moral majority at Carnation.

The agency created out of a chance to land Chevy was not only distracted by the social upheaval taking place outside of its windows. It was riddled with internal issues that stemmed from Ted and Don’s constant dick measuring contests to win Peggy’s affection. Both of them tried to win her over with their campaigns. At first, Ted, with Cutler, Gleason and Chaough, seemed like a great boss. He was always praising Peggy and letting her take the lead. Then, it turned out that Ted was just a passive aggressive version of Don. Someone who spoke in fake smiles and double speak rather than cut downs that resonated because of the timbre of his voice. The only thing great about Ted’s management style is that he’s able to keep people on task rather than coerce them into taking butt vitamins in order to stay awake on (we see you, Jim Cutler). Other than that, CGC turned out to be a bizarro world version of SCDP.

The other significant reflection in a season full of them was the mystery surrounding Bob Benson. He came out of nowhere like an apparition. He’s delivering catering trays to get ahead. Telling Ken his dad died. Comforting Joan and becoming a father figure to Kevin. Getting Pete a male nurse for his ailing mother. This created a flurry of theories on the Internet that tried to explain who he was. The crack pot theory was that he was the time traveling descendant of Peggy and Pete. The more sane explanations pinned him as an opportunist who would ultimately make partner one day. In the end, he was Don Draper 2.0. Fake name, false résumé and a convoluted back story. No one seemed to have a handle on anything including family man, Duck Phillips. He was a man willing to bend the rules in order to escape his background as the son of West Virginia mountaineers.

Yet Bob’s revealled Pete to the realization that he could make Bob useful. He could manipulate Bob anyway he wanted in order achieve prominence at the agency. There sure is a lot of manipulation going on in the place that sells it (wink wink).

Season six seemed to end on a much more redemptive note than the episodes leading up to its endpoint. I was expecting someone to die or Don to be in the fetal position again, doing noting about his state. Instead, Don is standing outside of his broken childhood home as the paint peels off in the cold, November wind. He looks at Sally, and Sally looks at him. You can see the connection again after their relationship seemed like it could never be mended. It leaves it open ended as to what’s in store for a man who has destroyed every relationship he’s forged (or fabricated). I am optimistic that Don can get his act together and somehow find a way to heal. But the ’70s are on the horizon, and Don may just start having his mid-life crisis right around the time disco invades New York. 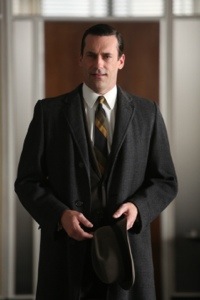