The first season I kept up with MotoGP in real time was 2003. Before then, I read race reports on the Old Internet or flipped through whatever year’s Motocourse was still on the shelves at my local Barnes & Noble during my dad’s Sunday bagel run1 because I was a car kid more into F1 and NASCAR, plus we didn’t have TV access — or if we did, I didn’t know when because ESPN increasingly used its Walt Disney money to invest in mainstream sports during daylight hours while its niche coverage retreated to insomniac timeslots or got sold off to other stations entirely. I understood the gist of that world by the time our cable package added Speed Channel, in other words, but it was mostly by accident.

END_OF_DOCUMENT_TOKEN_TO_BE_REPLACED 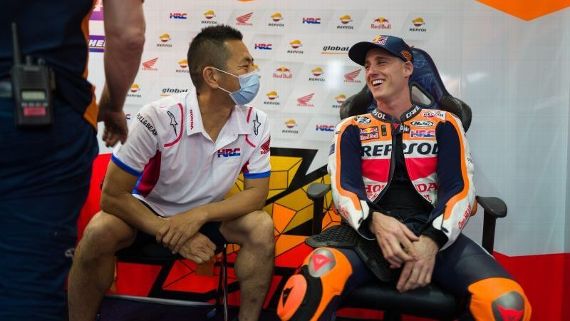 He was all smiles atop a snowy Andorran mountain when the cover officially broke for his 2021 look, full of ebullient chatter about Repsol Honda’s loaded history and the on-track challenge of a new bike and the ultimate teammate that awaited him. Any idiot could see it, any child could tell: Pol Espargaro was ready, practically jumping out of his seat with nervous energy at the chance to wring its neck, the neck he’s been hearing and reading and seeing he might be pretty good on for years now. “If only Dani would retire,” messageboards clamored. “If only Honda hadn’t thought of Jorge first,” journalists mused. Through it all, Pol shrugged, smiled, overdelivered. Then came the offer. Now comes the reckoning.

END_OF_DOCUMENT_TOKEN_TO_BE_REPLACED

Right now, there is someone somewhere out there with wrists of God who walks among us. Maybe he’s sharing a favorite father-daughter moment. Maybe he’s napping on a boat or out hunting quail or quietly flexing to himself in a bedroom mirror or playing the absolute worst golf of his life. Maybe he’s thinking about a dragon tattoo or the implications of that new Kendrick Lamar record. Maybe he’s snorkeling.

The 2015 MotoGP season gets underway this coming Sunday. Persian Gulf winds will blow sands across the straights. The sun will bleach out the day before giving way to the pitch black of night. Powered by more than 450 million lumens, Losail International Circuit will come alive with the power of enough energy to light a city street from Doha to Moscow. Maybe a few hundred participants, hangers-on, questionable expats, and natives with the money will see it happen in person because that’s how motorsports works in the Middle East. And it’ll be enormously entertaining because, even sitting in an uncomfortable thatched chair at home, grand prix bike racing’s circus is a blast to watch. There’s no feeling in sports quite the equal of anticipation’s release.

And yet, it won’t feel complete. Casey Stoner may be doing a lot of things right now. You know what he isn’t doing? He’s not riding a motorcycle competitively. He may not be riding one at all. He may not even be thinking about it. And it’s our fault.
END_OF_DOCUMENT_TOKEN_TO_BE_REPLACED

I don’t remember the first time. I remember things surrounding the first time but not the thing itself. I remember welcoming the torrential rain left over from Hurricane Ike on my sunburned arms. I remember a crowd full of people enthusiastically booing Dani Pedrosa on the grid and cheering Nicky Hayden’s crutches on the podium. I remember Valentino Rossi. I remember Nico Terol.

I don’t remember much of the second time, either. A brief mental snippet from Saturday morning as bikes stream past – two seconds, maybe three. Enough to know that it was real and that I did not just imagine it or Nicky Hayden’s flat-track demo laps or Jay Leno chilling trackside in denim or a crowd full of people politely clapping Dani Pedrosa on the grid and cheering Ben Spies on the podium. I remember Toni Elias. I remember Nico Terol.

The third time I saw Marc Marquez race in person was different. He was riding a MotoGP bike for one. He was on pole gunning to remain undefeated through the first ten races of 2014 for another. He was in his moment as the best motorcycle road racer on the planet.

Spoiler alert: This is another sermon on greatness. Greatness is a quality reliant on perception, I know, and everyone’s got a different view from where they sit. For last Sunday’s seventh annual Red Bull Indianapolis Grand Prix, mine happened to be trackside. This is what I think about on vacation.

END_OF_DOCUMENT_TOKEN_TO_BE_REPLACED

The alarm went off.

You woke up. Maybe you were fully awake with the adrenaline of anticipation by the time it started; maybe you were still half-asleep and in a daze of obligation. Friends congregated around a television – you could have been one of them – or you just kept your phone charged to ensure you got the texts as they rolled in. You had cereal, or you started in on the drinking. Grease was standing by as a coping mechanism. You were decked out in the attire of a country you’ve never visited and don’t know anyone from, or just your pajamas. Your Twitter feed was open. All the quips from strangers you’ll never know rolled in. And you remember where you were when David Luiz scored after 18 minutes. The knockout rounds had truly begun. The day was just beginning.

For you, anyway. Somewhere else, I was already in the process of interviewing the first of four candidates for a position at my radio station. I had already traveled an hour north from my apartment by the time of Luiz’s goal. My cereal was long gone. I wasn’t watching. I had been up since 4am. I had already seen genius again.

END_OF_DOCUMENT_TOKEN_TO_BE_REPLACED

It’s been four months, I know, but we should go back over some groundwork together. As a reader of this experiment, good for you: You know your limits. You embrace hypothetical supercontests. You have time to read the legalese between EA Sports and the NCAA. You snagged Yeezus the hour after the hour it leaked to ensure you got a decent rip. You know Messi’s first name. You see baseball as a New York-everything else binary. You follow the important Tumblrs. You care about The Roots on Fallon. You get it.

There are, of course, things you don’t know or get. You don’t know about Rodan live in their prime, say, or life writing poetry under Pol Pot. You don’t get motorsports. Again: Good for you, you know your limits. A delusional Dale Earnhardt Jr. commercial? Sordid tales of French all-nighters three months ago? If you click on the Categories sidebar to the right long enough, any Chipotle pitstop can eventually seem effortless.

You know it’s easy to visualize experiencing “The Everyday World of Bodies” in person with the help of a VHS rip to YouTube. You know it’s easy to compartmentalize the struggle of a ruthless dictatorship when you parse out the prison lit. You get guiding a 160kg piece of machinery at 200+mph when you’re doing it from the comfort of your wireless Xbox controller. You’re also smart enough to know these are approximations. You don’t really know Rodan. You don’t know Pol Pot.

And you don’t get having to guide a 160kg piece of machinery at 200+mph year after year, on the best piece of engineering available, with the highest and darkest forces of sports and politics backing you, for millions of dollars, and losing. Dani Pedrosa does. And it’s about to happen again.