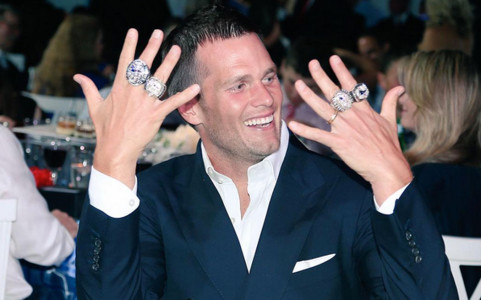 (Disclaimer: I am not an economist.)

As your resident Patriots apologist here on Tuesdays with Horry, I’m here to tell you that a lot has been said about consummate gentleman, best quarterback to ever play the game and general American Hero Tom Brady throughout his career, but especially since last season’s AFC Championship Game (You know, the one where the Indianapolis Colts lost by a billion and then whined to the league about it AGAIN, initiating the saga now known across the world as ‘Deflategate’). Lots of people have called him a cheater, a liar and various other mean things despite the total and utter lack of proof provided by the NFL that the footballs used in that game were deflated by anything other than natural causes.

My question to you, fellow Americans, is this: why?

Prior to Deflategate (what would we have done in the US with scandal suffixes if Watergate had never happened? How would we name all of our scandals?), Brady’s record was nothing short of pristine. Here’s a reminder to everyone that Tom had literally nothing to do with Spygate (Also, it’s been eight years. Can we move on already? We get it, you’re jealous and bitter. Get over it). Number 12 is a hard worker, a fierce competitor and an all-around nice guy who donates plenty of time and money to charity. The literal only thing he’s done to draw the ire of every human being outside New England?

Be too handsome, and win too much.

(Noted New York Jets fan and TwH editor Rory Masterson also wanted me to acknowledge that he has a child out of wedlock. To which I responded: remember when Antonio Cromartie played for the Jets [Editor’s Note: Welcome back, Cro!] and how he forgot the names of his six billion children? He graciously admitted he knew that was coming).

Anyone who even casually follows the NFL knows the legend of Brady: a Michigan man who had to fight for literally every college start he got. In 2000, he was drafted sixth round, 199th overall, the sixth quarterback to be taken in that year’s draft. He was fourth on the Patriots QB depth chart when he started. By his second season in 2001, he had climbed to second-string backup behind starter Drew Bledsoe. Bledsoe went down in the second game of that season, and we all know what happened next: Brady led the Patriots during one of the most successful runs in NFL history (I won’t even use the word “dynasty” because I know how you people get picky about that). Sounds to me like Brady pretty much epitomizes the American dream, no?

Which leads me to the conclusion that if you don’t like Tom Brady, you are a communist who hates everything America stands for.

Seriously. The NFL has been targeting the Patriots because it strives for and thrives on parity. It’s why the salary cap and the shared revenue plan exist. The 31 other owners are pissed that Bob, Bill and Tom are geniuses and have found the recipe for continued success, such that their names are in the running for the AFC Championship and the Super Bowl literally every season. They’re hated because they’re smarter, better and more competitive than every other team in the league, and they refuse to lie down and let other people win. It’s why Spygate and Deflategate have turned into the huge clusterfucks that they are, despite the fact that in the grand scheme they are minor violations of a similar scale to countless violations other teams have committed that have resulted in small fines or in many cases, a gentle reminder from the league. The league doesn’t like that the Patriots don’t spread the wealth. Sounds a lot like communism to me (another disclaimer about me not being an economist goes here, but I’m pretty sure that’s what communism is).

Seriously. As Americans, we’re fed this ideal from birth to death that in our society, if you work hard and are a generally good and honest person, you will be rewarded with success and wealth (let’s not start arguments about whether the American Dream is actually still alive because this is a fun sports blog and not a boring politics blog). Save me the crap about Tom being a liar because once again, there’s literally no proof that any tampering even occurred at the AFC Championship game. He has done literally nothing except train, compete, work hard and win. So I guess we hate winners in America now. Meanwhile, Tim Tebow still gets exalted, like, every other day on ESPN, and what has that guy ever really won? Made it in college and couldn’t make it in the big leagues. Here’s your NFL participation trophy, Tebow, thanks for playing (I’m sorry Tim, I didn’t mean that. I actually like you and think you’re a good person, just a mediocre football player).

If you hate Brady, fine. That’s your prerogative, as a Jets fan, or a Colts fan, or a Bills fan, or a Dolphins fan or any other fan. But just admit the real reason for your animosity: jealousy. If you had the chance to take Brady as your QB, you’d do it ten times out of ten. If you wouldn’t, you’re dumb, and probably a liar.

So have fun hating Tom Brady and, in turn, hating the American Dream. I’ll be over here watching my team be in the conversation for the Super Bowl every season until Tom turns 100 because that is how long he is going to play, probably. Enjoy your participation trophies, and fuck the Jets. Happy birthday to the greatest who ever lived.