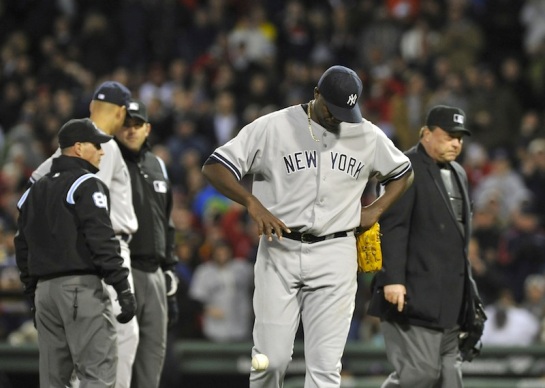 Let’s give the Boston Red Sox a round of applause for the team’s collective acting performance following Michael Pineda’s first pine tar incident. Give them all Oscars, Emmys or those little participation trophies your cousin gets for being in the school play. The entire team pretended like it was no big deal and goaded Pineda into pulling the same stunt again, making certain the second time that the New York pitcher was promptly removed from the game. Genius. Evil, but genius.

That was my assessment of the situation, as I watched the home plate umpire wipe pine tar from Pineda’s neck like a mother trying to clean a newborn child that has yet to master the art of inserting a spoon into its mouth. I’m a devout Yankees fan, but game had to recognize game, and Boston seemed to have turned its mind game up a notch when they convinced Pineda it was safe to lather his pitches with pine and let ‘em rip. But that’s not how the larger baseball community saw it.

END_OF_DOCUMENT_TOKEN_TO_BE_REPLACED

“And then? And then, when I walked down the street, people would’ve looked, and they would’ve said, ‘There goes Roy Hobbs, the best there ever was in this game.'” – The Natural

Exceedingly rare in sports is the career in which a player maintains a world-class level of dominance through a retirement on his or her own terms. Only a handful of players can even lay any valid claim to that. Wayne Gretzky scored 90 points in his second-to-last NHL season only to fall down to 62, a perfectly formidable number for a 38-year-old center in professional hockey, in his final season, 1998-’99. In the same sport, legendary Soviet goaltender Vladislav Tretiak retired at the age of 32 in 1984 after accumulating dozens of accolades and medals with the Soviet national team and CSKA Moscow and also without ever playing a minute in the NHL. Michael Jordan managed to average 20 points per game in the 2002-’03 season during his second and final comeback, with the Washington Wizards. He even scored 43 points as a 40-year-old, a task suburban dads in driveways everywhere wish to check off the Saturday morning to-do list. Depending on how the next half-decade or so shakes out, Kobe Bryant could be there too. John Elway finished his career at the very peak of the mountain, with two straight Super Bowl victories in 1998 and ’99. A few European footballers, Paul Scholes, Ryan Giggs and Xavi Hernandez among them, also had or are having satisfyingly lengthy careers in which they maintain high competitive levels.